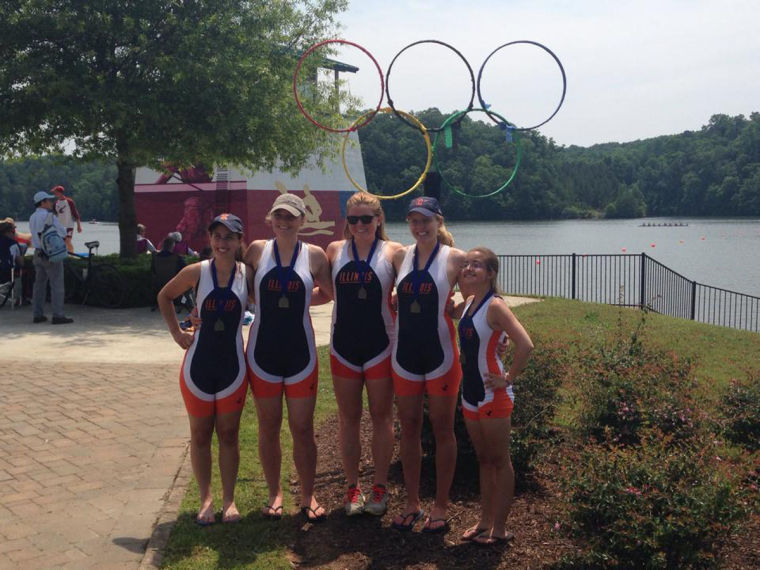 One is bloodstained. One holds a ribbon recognizing the recent shooting at UC Santa Barbara.

One came straight off a rower’s back. One has never been worn.

Yet all of these elements can be found in a collection of 10 shirts that the University of Illinois’ club rowing women’s novice 4-plus team won May 24 and 25 at the American Collegiate Rowing Association National Championships in Gainesville, Ga.

It’s the second national championship for the women’s novice 4-plus team, as they won in 2012, and four of those previous team members were on hand to watch history repeat itself.

The Illinois rowing club, joined by 65 other top university club varsity rowing programs from throughout the country, brought its season to a close with the ACRA National Championships. Although five total boats were on hand to compete, it was only the women’s novice 4-plus team that won those prized shirts by taking first.

The giving of the losing teams’ shirts to the winners is a tradition mainly reflected in season ending races. Ten of its 13 opponents gave the national champion Illinois team their shirts.

And these shirts can carry with them the pain and pride of a season.

“I try to imagine if I knew somebody else was to have my tank that I wore throughout the entire season,” junior Katie Ruhl said. “Through all the bad practices and all the effort. I almost feel bad taking it away from them because even though they’re able to start the new year with a new tank, everything you put into the old tank just got given away.”

The team, finalized only a week before the race, consisted of freshman Dana Brecklin, freshman Diana Montgomery, junior Elizabeth Dunne, Ruhl and freshman coxswain Adele Rehkemper. A coxswain’s job is to steer the boat while motivating the rowers to the point where all their attention is focused on their stroke technique.

With only Rehkemper having some prior experience, the team understands the impact of practice. The women’s novice 4-plus started off in an 8-plus boat, but was reduced to a 4-plus boat as the year carried on.

“In our first race back in October, probably everything that could have gone wrong, did go wrong,” Brecklin said. “Obviously this last race wasn’t flawless, but it was really amazing to know we came from shambles into a unit pushing hard and pushing through other boats.”

Typically a team with slow beginnings, the final race this weekend was the first time this season that team pushed out strong from the very start. In the qualifying heat before the final, Illinois was dead last for the first 300m before fighting back to finish second and move on.

In the final, Illinois trailed Midwest region champions Grand Valley until the 1200m mark of the 2000m race. The crew fought to get even around the 1500m mark when a decisive call by coxswain Rehkemper helped the team take the lead.

That call was a Spicy 10. A Spicy 10 is when a team completes a Power 10, followed by another quite Power 10. A Power 10 is 10 hard strokes done with as much effort as the team can muster.

“Rowing is unfortunately a horrible spectator sport,” assistant coach Bill Grier said. “And from a coach’s standpoint we can tell them what to do on shore, but as soon as we put them in the water, it’s all up to them. We have no influence on what’s happening, even on this course. It (the Spicy 10) was one of those moves that broke the backs of crews trying to hang with them at that point. It pushed them out of the peripheral vision of the crews behind them and when you can’t see whoever is in front of you, it’s really demoralizing. That’s what put the race away for them.”

The race was theirs, fueled by drive and pure focus. A testament to the shirts earned through the work of the season.

“At the end of the race, I looked down at my hands and they were bleeding all over the place and there was blood all over the oars: a regular occurrence in my life,” Brecklin said with a laugh. “Normally I’m conscious of the fact that my hands are hurting during a race. Just looking at my hands and the video after, I was seeing things during the race, but not really processing it. Adele kept us all focused. I don’t usually remember everything from races, but I’d never had the feeling of being oblivious to feeling during a race. And not oblivious in a bad way, but a good way. I’d never been so engaged in every single part of the race.”