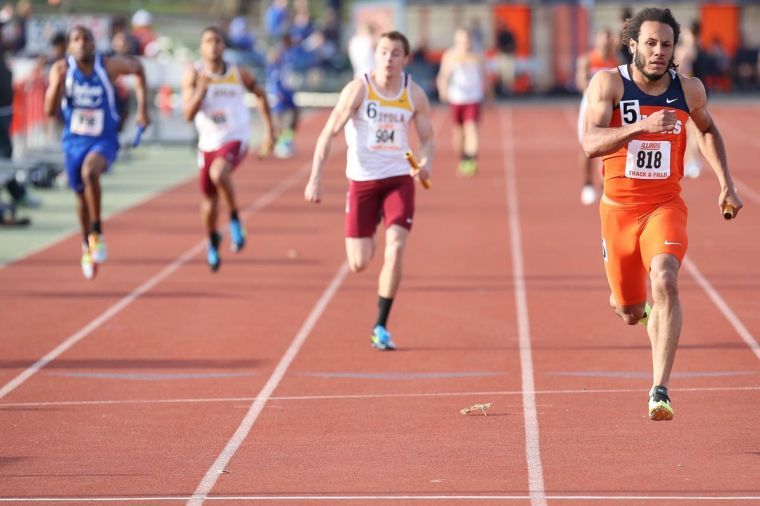 Illinois’ DJ Zhan crosses the finish line to win the 4×100 meter relay during the Illinois Twilight Track and Field meet at Illinois Soccer and Track Stadium, on Saturday, April 12, 2014.

The Illinois men’s track and field team’s season came to a close June 12, but not before they left their mark on the NCAA Outdoor Championships.

The championships were held at the college track mecca of Hayward Field in Eugene, OR. Six Illini athletes competed at the Championships following their success in the regular season and during the NCAA Preliminary rounds.

Senior Stephon Pamilton wrapped up his career as a member of the 4x400m relay team, alongside DJ Zahn, Joe McAsey and Kenneth Allen. The team finished the relay with a time of 3:05.80, good for 10th place at the Championships and second-team All-America honors. Pamilton graduates as a two-time Big Ten Champion in the 400m; his time of 45.92 won him the 2014 Big Ten Championship in that event.

Three Illini competed individually at the Championships. Junior sprinter Brandon Stryganek placed 15th in the 200m race with a time of 20.95, which earned him second-team All-America honors. Redshirt sophomore McAsey also received second-team All-America honors after finishing the 800m in 1:49.67, good for 14th place. Finally, sophomore Cam Viney placed 22nd in the 400m hurdles with a time of 53.09.

Though Viney hoped for a better personal finish, the experience of competing in the Championships left him motivated going forward.

“No matter how you finish, the drive and competitiveness you have once you’ve left Eugene is indescribable,” he said. “It pushes you to work hard to try and become the next national champion.”

The NCAA Championships followed a strong end to the Big Ten season for head coach Mike Turk’s team. The Illini placed second overall at the Big Ten Outdoor Championships in May, totaling their highest team score since 1994 in the process. Pamilton, McAsey and senior Vanier Joseph were all crowned conference champions. When the season came to a close, Turk took pride in the season his team was able to put together.

“This team worked really hard, came together and performed very well,” Turk said in a press release. “It was a heck of a season, one I won’t soon forget.”

With the momentum gained from this past season and Pamilton being the only senior among his NCAA Championships qualifiers, Turk believes his team will have the firepower to keep the program moving in a positive direction next year.

“Those returnees will progress next year, others will step up and the program will keep moving forward,” Turk said.

Alex can be reached at [email protected] or @aroux94.