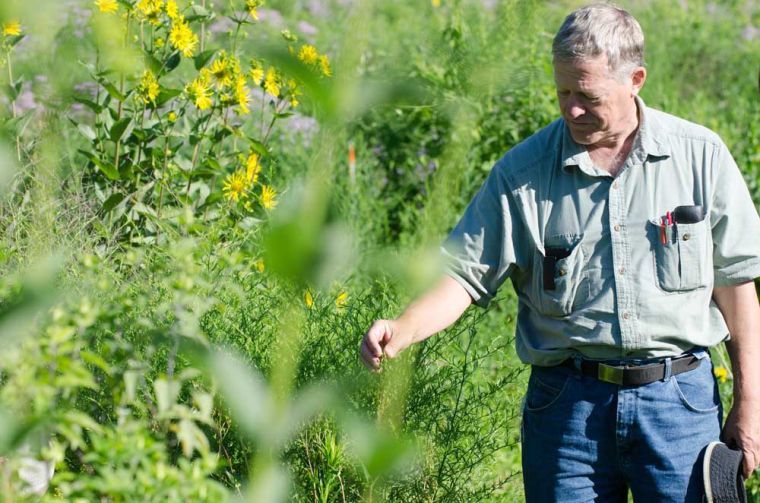 John Marlin, a volunteer, coordinates the work done to maintain the prairie at the corner of Florida Avenue and Orchard Street.

The corner of Florida and Orchard used to be a no-mow zone — a drab collection of tall grasses and weeds — but then the Student Sustainability Committee started a project in 2010 to spruce the area up, transforming it into a prairie.

Last week that same prairie was in a colorful bloom, with two of the most common forbs in the prairie — bee balm and yellow cornflower — flowering across the 2.7-acre field in a sea of yellow and purple.

John Marlin, a volunteer who coordinates the work on the prairie, said this is the best he’s ever seen it look.

“We had a big turning point this year, things look much better now and the plants are growing well,” he said, adding that there are over 40 other species of plants in the prairie that bloom in different times of the year, up until October.

“John loves to say this, but every week it will look different,” said Jessica Mondello, junior in ACES and restoration tech at the prairie.

In 2012, Marlin said the prairie was in poor shape, almost half of it occupied by prickly lettuce, a weed that can grow to be up to 10 to 12 feet tall. But the worst part for Marlin was that, at the time, the prairie was completely volunteer dependent.

“It was impossible, too big of a job,” he said. “Coordination is a killer. A thing like this needs work at times when students are gone … so to say ‘we’re going to do volunteer work at two’ doesn’t work.”

The sustainability committee let Marlin re-word the proposal in 2012, and following the rewording, Marlin hired a few technicians, including Mondello. The original plan included a parking lot, a viewing deck and a concrete path through the prairie.

“We needed to establish the prairie first before we did any of that,” explained Marlin.

Even though the technicians take care of much of the work, volunteers assist them throughout the year — whether it’d be weeding in the summer, or applying seeds in the winter. He said more than 300 volunteers have helped since he started at the prairie in 2012.

“A lot of students who aren’t affiliated with any organization come out here because they like the prairie. We’ve had several people from Orchard Downs over here,” he said pointing to the east of the prairie. “They ask what we’re doing, and they ask if they can help.”

On Wednesday, the team applied mulch to a path — which Marlin said was carved out so the workers wouldn’t damage the plants during work hours. He said anyone is free to walk through.

Paul Littleton, a graduate student in landscape architecture, helped in the process. ?

“We watched where we wanted to put this path, as we watched where people wanted to go, and just put it there,” he said, adding that the path winds around the prairie to feature some of the more colorful and diverse flowers.

Marlin said that at this point, the prairie doesn’t look that similar to native prairies, mainly because forbs like bee balm and yellow cornflower were given more of a preference in the seeding process.

“If this prairie was mostly grass like a normal one, you wouldn’t get all the colors that you see now,” he said. “This is the best educational tool to show people what these plants look like.”

He said having native plants that are colorful will attract more people to the prairie, and help teach them about the historic flora of the region. He added that seedlings of grasses are already establishing throughout the prairie and should be visible next year.

“The campus should be watching this because there are plans to establish more prairies and other native plant sites on campus,” he said.

Austin can be reached at [email protected]