Local community speaks out against Israeli offensive in Gaza 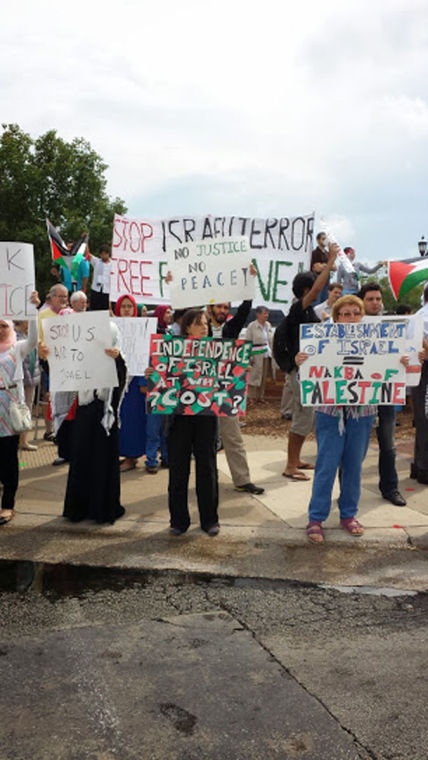 Demonstrators outside the federal courthouse in Urbana gather in a protest against Israel’s offensive in Gaza on Friday. More than 150 people were in attendance.

Over 150 people lined Main Street outside the federal courthouse in Urbana on Friday, gripping Palestinian flags and signs proclaiming support for Palestine in the wake of ongoing conflict between Israel and Gaza.

Israel’s offensive against Hamas in Gaza began on July 8, and has resulted in over 1,100 Palestinian deaths and 45 Israeli deaths as of press time, according to a New York Times report.

The protest was hosted by the University’s chapter of Students for Justice in Palestine and included community members from all backgrounds, religions and races.

Ahmad Hamdan, president of Students for Justice in Palestine, said the purpose of the protest was to put pressure on the U.S. government to act in the face of such calamities.

He told those participating in the protest never to underestimate the power of demonstrating.

Social media has played a significant role in sharing information, articles and viewpoints to a wider audience in the wake of the recent incidents.

Umama Mahmud, a senior in LAS, said she was inspired to take part in the rally after seeing posts on social media about the conflict in Israel and Gaza and subsequently researching the topic further.

“The protest is an opportunity to stand up for what’s going on,” Mahmud said.

Champaign-Urbana was not the only community to take part in a protest. Cities across the country and around the world were host to rallies throughout the week in support of Palestine. Chicago held a protest on Sunday, July 20 and another Saturday, July 26 with more than 10,000 people in attendance at each event.

As the death toll rises on both sides and the conflict continues, Friday’s demonstrators said they wanted to remind people that despite the fighting being geographically far from the U.S., it is a real situation affecting real people.

Nora Al-Qadi, senior in Engineering, said the public outcry in response to the conflict is long overdue as no human should be subject to such conditions.

“These are not just statistics on a piece of paper, these aren’t just numbers — these were people who deserved a better life,” Al-Qadi said. “Gaza has no voice — we are their voice.”