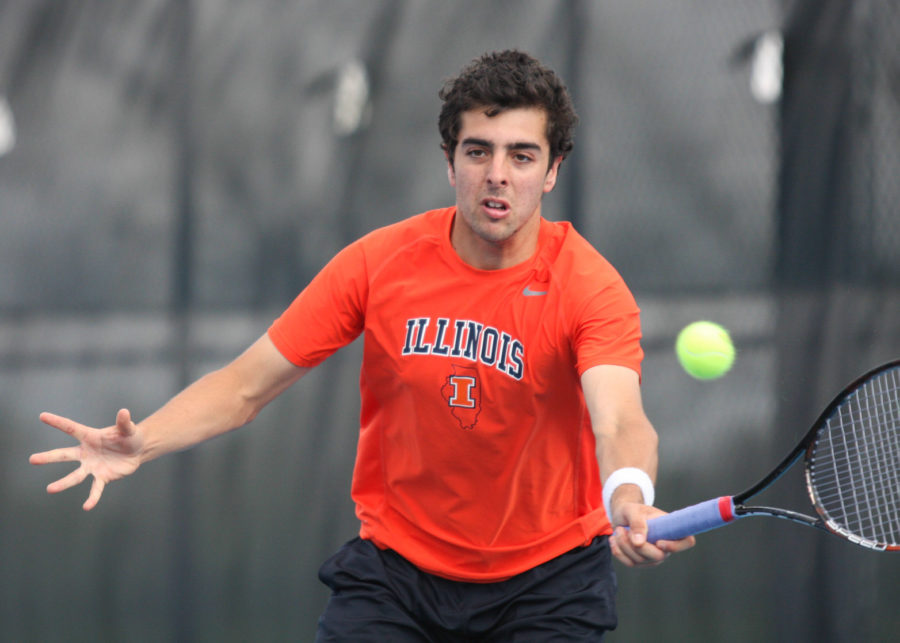 Illinois’ Farris Gosea hits the ball back during the first round of NCAA Tennis Regionals against Ball State University at Khan Outdoor Tennis Complex on Friday, May 9.

“We’re one of the big exceptions … It’s very rare to have as many domestic players as we do, especially Illinois players,” head coach Brad Dancer said. “It’s a big deal for us, we take a lot of pride in that we have such a U.S.-based, Midwest-based team.”

Last year, the Illini had one international player in Farris Gosea, the reigning Big Ten Athlete of the Year. In last season’s final rankings, 14 of 25 teams had more players from abroad than from their home state.

In the period covered by the ethnicity report, 1999-2010, the percentage of international Division I men’s tennis players grew by 23.4 percent. Dancer says that one reason for the growth is tennis’s dominance as an international sport. A report from the USTA agrees with Dancer that tennis has exploded worldwide. It and also lists the fact that the U.S. is the only country to offer significant scholarships for intercollegiate sports, which draws in top young international players, and pressure from athletic directors to recruit the best players from around the world.

Still, Dancer is focused on the top players from Illinois and around the Midwest, even as the team has had success with international players, like Gosea and former Illini Kevin Anderson of South Africa, who will begin play at the US Open in a few short weeks. All but one of Dancer’s nine teams at Illinois have had at least one international player.

“The international players we have, they’ve all kind of come about through random chance,” Dancer said. “We don’t do a lot of recruiting internationally, we haven’t done that in the past. I just made my first international recruiting trip this summer.”

While the incoming freshman class features top in-state recruit Aron Hiltzik, younger brother of current No. 1 singles player Jared Hiltzik, two international players are joining the Illini this year though, in freshmen Pablo Landa of Mexico and Aleks Vukic of Australia. Landa is an under-21 Mexican national champion and Vukic won the Australian Secondary Schools Tennis Championships in the spring.

The two weren’t targeted by Dancer, but he was impressed after meeting Vukic in Florida and heard about Landa from Landa’s coach, former Illini Brandon Davis.

While the University gets more international students every year, Dancer will continue to focus on recruiting the best of the Midwest, though he said that he thinks Illinois will continue to draw players from overseas.

“The nature of how we run our program, what we do, the player experience development at Illinois is valued by people,” Dancer said. “That word has spread all around the world.”