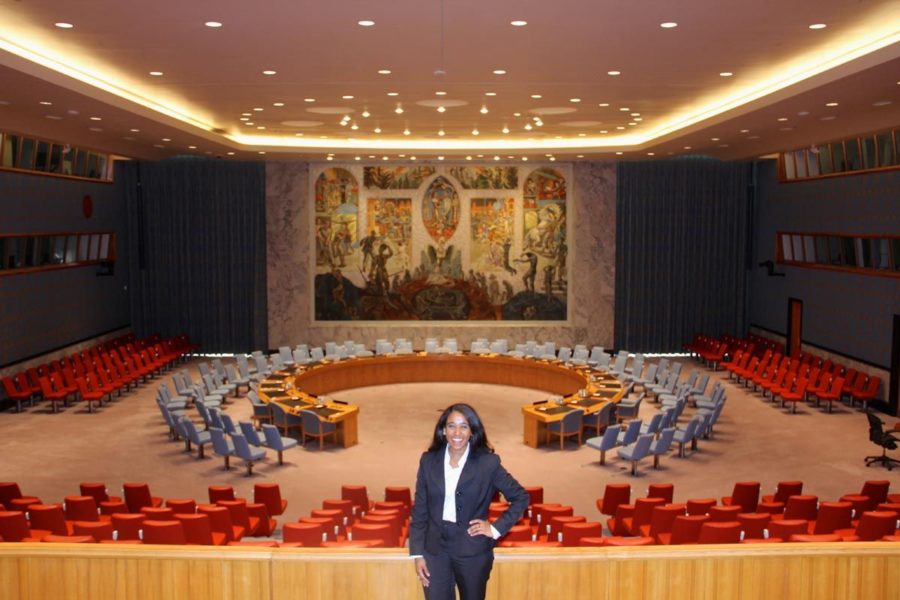 Cristina Valdez stands in the United Nations’ Security Council Chamber in New York City in June. Valdez was one of the few applicants accepted into the U.N.’s internship program this last summer.

Every year, summer internships can give University students the opportunity to do everything from meeting international diplomats to feeding seals through these opportunities.

Companies and organizations such as Boeing, Louis Vuitton, Microsoft, United Nations and Brookfield Zoo take thousands of applicants each year. This past summer, five University students were able to experience working at these competitive locations.

Cristina Valdez, senior in LAS, said she screamed with joy when she got the email that she was offered an internship at U.N. in New York City. U.N. internships usually only accept six to eight percent of applicants, according to Valdez.

Valdez was a protocol intern. She sat in on high-level meetings of the U.N. Security Council, Economic and Social Council and Trusteeship Council. She took notes as major political figures discussed the war in Gaza, the political unrest in the Ukraine and the downing of the Malaysian Airlines Flight 17.

“I had to constantly remind myself that I was sitting in on the meetings that I usually read about in The New York Times,” she said.

Valdez said she worked outside of meetings, too. She assisted the U.S. Ambassador to the U.N. and one of her role models, Samantha Power, in planning diplomatic events with world-renowned diplomats, CEOs, journalists, senators and foreign ministers. Valdez said her favorite was personally escorting Ban Ki-moon, the Secretary General of the U.N., at an event.

“This internship has opened many doors for me and has made me realize that international relations is truly my passion,” she said.

Tyler Rallo, senior in Business, also interned at a place he was passionate about. At Boeing, Rallo said he liked how he could interact with people outside the finance department in an industry he could see a future career in. He said he thinks his enthusiasm for the company was what set him apart from other applicants during the interview process.

“The biggest thing that Boeing looks for is people who are passionate about Boeing,” he said. “A lot of the things they do, they can teach you how to do it. What they care about is making Boeing great, not just making yourself great.”

Rallo interned in corporate finance at the St. Louis branch of Boeing. As the company’s second largest branch, the St. Louis location received over a thousand applications this past year, but only accepted 20 to 50 interns in his department. Rallo said he managed budgets for six managers to make sure projects were on track while working at Boeing.

Rallo said his most memorable experience at his internship was when he got to fly in a flight simulator. Though the flying was simulated, Rallo said he appreciated how the internship allowed him to take what he learned in the classroom at the University and apply it in real-world situations.

“Finance is finance no matter what it is,” he said. “What makes you love your job is making something you think is awesome.”

Jenna Epstein, senior in ACES, said she was inspired by what she learned from studying abroad in South Africa last year when she applied for her internship. In South Africa, she observed veterinarians helping wildlife at Kruger National Park. Her experience led her to intern at the Brookfield Zoo this past summer.

Brookfield Zoo had over 500 applicants for 22 internship positions, according to Epstein. Her position allowed her to prepare the buckets of fish and assist in training behavior sessions. During the Dolphins in Action presentation, she stood at the doors to control the crowd and answer questions the public had about the show.

Epstein said she learned about positive reinforcement training and even got to go behind the exhibits, allowing her to meet seals, sea lions and dolphins.

“It’s amazing to experience how trusting they are of you and to build a relationship with these animals,” she said.

Emily Tran, senior in Engineering, interned in a completely different work setting: Microsoft. She went through phone screenings, on-campus interviews and was even flown to the West Coast for technical interviews that involved coding and product design.

“It was really competitive because Microsoft is one of the companies at the career fair that receives tons of resumes and online applications,” she said.

Tran worked on business intelligence features for Microsoft Excel. She was a program manager for two projects, working on competitive analysis and user-interface designs, in addition to volunteering at demo fairs. After her internship, she said she was offered a full-time position after graduation and took the opportunity.

Interning at a company as large as Microsoft comes with perks, she said. Every year, Microsoft hosts an Intern Signature Event. This year, Tran went to the Puyallup Fairgrounds, complete with a David Blaine magic show and free Xbox Ones for each intern.

Tran said she learned about Office products in-depth and the processes of developing software to improve existing products. Tran even participated in a small intern roundtable with CEO Satya Nadella.

“It was great to know our leaders really care about intern feedback and opinions,” Tran said of the meeting.

Angela Yang, senior in Media, was no stranger to meeting high-profile people either. As an intern at Louis Vuitton in Chicago, Yang helped with private client events. The events had servers hand out champagne and desserts, while a Ford model tried on Louis Vuitton outfits for the clients.

One time Yang helped Albert Pujols at the store, but did not know it was him until after Pujols left. Another time, Yang said George Lucas and his wife came into the store.

She said she learned about asset protection, merchandising and working with clientele. But what she really appreciated was having great coworkers in a big city.

“The Louis Vuitton in Chicago had this family environment that I really appreciated,” Yang said. “I’m hoping to find something similar to that at my new job after graduation.”