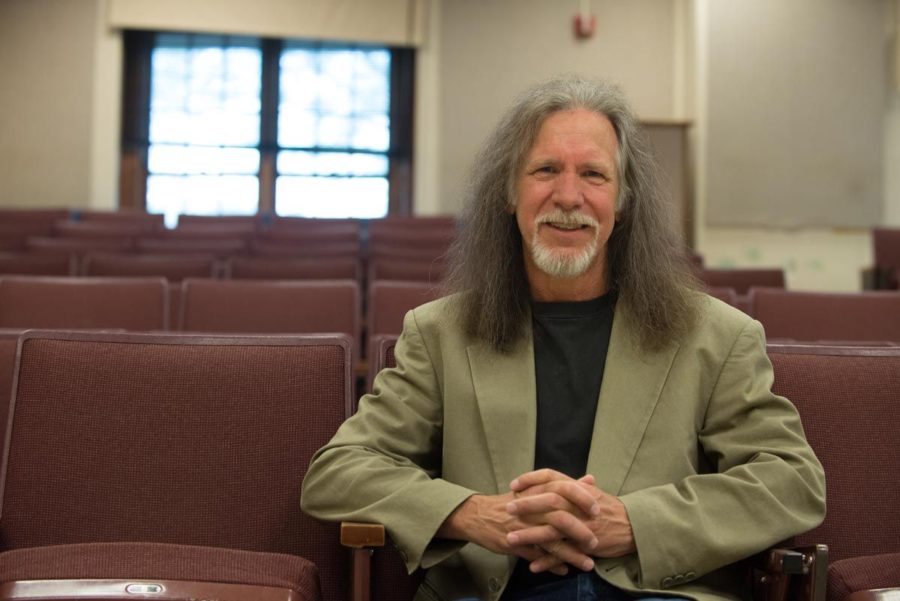 For Peter Sheldon, lecturer in Advertising, his shoulder-length mane usually makes the first impression. But it is his passion for advertising and teaching that leaves a lasting impact on his students, faculty, and peers.

Sheldon received national recognition for his teaching style and dedication after winning the 2014 Association for Education in Journalism and Mass Communication (AEJMC) Distinguished Teaching Award in the Advertising Division on August 8 at the 2014 AEJMC Conference.

To students and faculty who know Sheldon, the award reaffirms what they have seen in the classroom.

“Peter is a brilliant teacher,” said Jan Slater, dean of the College of Media and former head of the Charles H. Sandage Department of Advertising. “He truly loves what he does and that shows in his classes and his teaching evaluations and certainly in this award.”

According to Charles Lim, a former student of Sheldon’s and a 2012 alumnus in advertising, it was surprising that Sheldon did not get the award sooner.

“He forms a connection with his students and he knows how to get creativity out of you,” Lim said. “That was the only class I really looked forward to.”

Lim, a former managing editor for visuals for The Daily Illini, has gone on to use the creativity that Sheldon was able to inspire in his students in the professional advertising world as art director for Jacobson/Rost, a boutique in Chicago.

Among the different forms of national and on-campus recognition he has received throughout his career, he values his teaching awards more than any other.

“Awards are recognition by peers and students that I work in a college and a department that value teaching on a campus known mainly for research,” Sheldon said. “It’s a symbol, hopefully, that I am making a difference in my students’ lives, and I hope it’s a symbol that I care.”

Growing up as a “child of cheese and sausage” in Milwaukee, Sheldon said he first discovered his aptitude for advertising during his senior year of high school when he entered a local ad contest for the formal prom.

According to Sheldon, he won a free tuxedo, dinner at the nicest restaurant in Milwaukee, tickets to prom, flowers, and bragging rights by submitting the best ad for the event. He won with the entry: “School should have a formal prom because when else can you forget to bring your date flowers, spill a drink on her dress, step on her foot while dancing and still get a goodnight kiss?”

After realizing he could forge his craft and wit into a living, he pursued advertising as a career after high school.

He landed his first portfolio job in Chicago, where he started as the “lowliest copywriter” and eventually became the associate creative director, he said.

However, unsatisfied with the work he was producing and the pay he was receiving, Sheldon moved to Richmond, Va., in hopes of achieving success elsewhere.

Yet, three days after accepting an offer for a senior copywriter position in Richmond, the agency lost its biggest funding account and proceeded to change ownership several times within a span of five years.

Still, Sheldon said he managed to achieve success — winning recognition from Clio Awards, The One Club, Communication Arts magazine, and both the Chicago and Richmond Addy’s.

However, the constant change and instability eventually grew burdensome, he said.

“I was tired of proving myself to new owners,” he said. “Advertising isn’t a ‘what have you done for me lately’ business — It’s a ‘what will you do for me tomorrow’ business. I didn’t feel like I was leaving a legacy.”

Coming from a family of teachers, Sheldon said teaching was always in the back of his mind.

Thus, in 1993, Sheldon began to teach in various capacities at the University of Illinois and joined the advertising faculty as a lecturer in 2000. He finally found the influence he was looking for — not in his work, but in his students.

“The big difference is that teaching gives me an opportunity to effect students’ lives,” he said. “My legacy is my students out in the field. I’m prouder of them than any award I’ve won in the industry.”

For this reason, there is no place he would rather be than where he is now – in his office in Room 2 at Gregory Hall.

“I’m not leaving,” he said. “I won the job lottery. I get to go and do something I like four out of five days a week. How many people get to do that?”