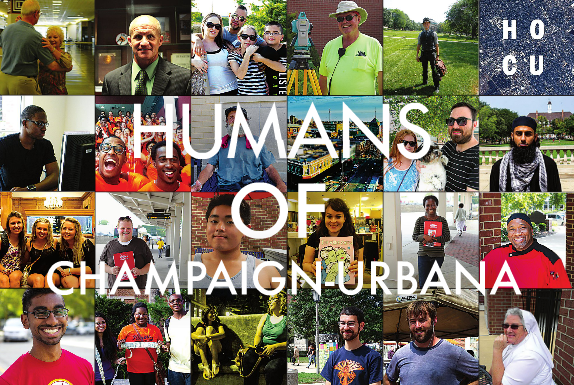 “The purpose of this project is really just to connect the campus community to the rest of Champaign-Urbana,” said Jason Yue, creator of Humans of Champaign and junior in Engineering. “Students don’t know the community well, and the community wants to understand the University better as well. This is not just a town in the middle of Central Illinois. People all over the world come here for the University, and there is a lot of culture and richness here.”

Within the project, Yue and Alex Fung, senior in LAS, head out every day to find the stories and people they need to keep their project going. They then share the stories they collect on the Humans of Champaign-Urbana Facebook page, along with a photo of the person that told the story.

In order to not make the project solely based around University life, Yue and Fung make sure to cover all areas of Champaign-Urbana.

“I’m very curious about people,” Yue said. “I went through the lowest points in my life in the past six months, and came out with the conclusion that life is beautiful, and you have a lot of opportunities to do stuff. I’m genuinely curious to see what people do and why they are doing it.”

When looking for people to approach for the project, Yue said there is not just one way to go about doing it.

“One thing I keep in mind is when people are in larger groups, people are less willing to open up,” Yue said. “Maybe it’s because they are with their friends. But I found the best way to approach people and find the stories I’m looking for is to see if anyone has anything that I’m curious about or is doing something that you don’t see every day. Then I will go up to them and ask what they are doing and what they are all about.”

Yue said he opens up the conversations by asking questions such as, “What are you doing?” “Who are you?” and “What are you about?” If people are skeptical about the project and what Yue is up to, he said he will talk about himself first to create a positive vibe.

“People have definitely rejected us before,” Yue said. “But what sets us apart from Humans of New York is if we aren’t connecting to the people, we gracefully exit. People will say they can’t share their photo on the Internet for various reasons, but they will offer advice to put on our page. Then we take a picture of something else that represents who they are and what they told us.”

Fung said the stories they collect are the most important part of the project.

“The photo is not the main focus — it’s the conversations,” Fung said.

So far, the project has shared 40 posts featuring people of all ages and backgrounds.

“Being interviewed by Jason was awesome,” said Nick Tarleton, a junior in ACES who was featured on the Humans of Champaign-Urbana page. “I didn’t know a page filled with so much inspiration and positivity existed. With so many UI students stressed, overwhelmed, or even tired from class, I feel that seeing this page and being featured on this page will turn our day around; I know it has for me as I am always eager to read someone’s story.”

Yue began the project mid-August after traveling to Minneapolis, which consisted of taking eight-hour bus trips.

“On those trips you can either plug in your headphones or talk to the person next to you,” Yue said. “I enjoyed the conversations I had with the people next to me on the bus, and I found that people are more open than I initially thought.”

Yue said his experience on the bus led to the development of Humans of Champaign after wanting to find those conversations and connections with the people of Champaign-Urbana.

“I only have two more years here, and I don’t know the community,” Yue said. “As far as the history of Champaign and Urbana and the people that live there, I have no idea what they are about, and I want to discover it more.”

Within the first three weeks of starting the project, the Humans of Champaign Facebook page was up to 830 likes.

“In those three weeks, I got to meet a lot of unique people on a personal level,” Yue said. “There have never been three weeks where I met as many people and connected with them as I did then.”

Fung also said the project has led him to people he never would have met if not for the Humans of Champaign-Urbana project.

“This project is all about getting to know more about people than you normally would,” Fung said. “Downtown I was able to meet a construction worker, a T-shirt worker, a guy that just got out of jail, and a food truck worker. I would have never have met these people under any other circumstance.”

Yue said that one of his favorite encounters was in downtown Champaign with a homeless man in a wheelchair by the name of Rick. The conversation started with just talking about Champaign-Urbana.

“I’ve had people all over the world talk to me, hand me a buck,” the man said. “I’ve lived in 14 States, but I always come back to Champaign. The people are so welcoming. It’s a good, quiet, peaceful place. I have not found a better place.”

Yue said that conversations like this are what he and the Humans of Champaign-Urbana project are all about.