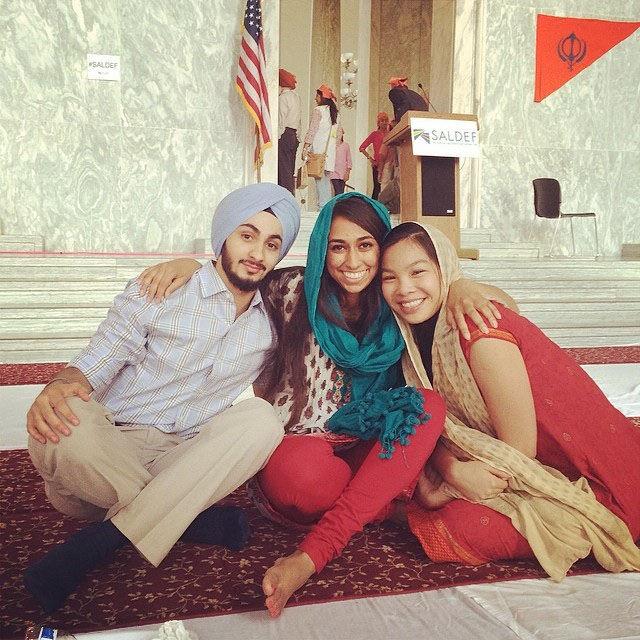 When walking into the Rayburn House Office Building in Washington, D.C., the sight of nearly 145 congressional leaders, staffers and the surrounding community sitting on the floor eating a vegetarian meal would seem out of the ordinary.

But for the first time on Capitol Hill, the building played host to the inaugural Langar on the Hill on July 30, where the Sikh-American way of life was introduced to participants.

Langar is a centuries-old tradition in the Sikh religion that emphasizes social and economic equality as they share vegetarian food together. Participants sit on the floor to share a meal while tearing down racial and sociopolitical barriers.

The Langar on the Hill, which was arranged by 13 interns at the SikhLEAD program in Washington, D.C., was inspired by a 2013 Langar hosted by the University’s Sikh Student Association (SSA). Among the interns who arranged the Langar on the Hill was Amrita Bamrah, a 2014 alumna in LAS. Bamrah was also a part of the SSA while on campus and led the charge in organizing the University’s 2013 Langar.

“You hear about a faith, you hear about a set of values, but we want people to actually experience that and experience sitting next to whoever it is next to them, regardless of their background and sharing a meal,” Bamrah said.

Along with 12 other students, Bamrah interned at the SikhLEAD program, which fosters young Sikh American leaders and promotes intercultural welfare.

Bamrah was a junior at the University when she and the University’s Sikh Student Association hosted the Langar on the Engineering Quad on April 24, 2013, serving more than 1,500 students and raising awareness for a culture that has been confronted with many difficulties in their history.

Following the success that the Langar had on campus, Bamrah and her fellow SikhLEAD interns hosted their own Langar on the Hill this summer.

The Sikh American Legal Defense & Education Fund (SALDEF) was the main sponsor behind the event.

The organization, which advocates for the very small minority group of 700,000 people in the U.S., seeks “to empower Sikh Americans by building dialogue, deepening understanding, promoting civic and political participation and upholding social justice and religious freedom for all Americans,” according to its website.

In 2013, SALDEF partnered with Stanford University and created a “Turban Myth Report,” which was the first public perception assessment of Sikh Americans where it was learned that despite being a part of American fabric for over 120 years, the vast majority of people assessed could not associate many facets of Sikh religion to its people.

“Seventy percent of respondents could not properly connect a Sikh man in a turban to his religious affiliation,” said Jasjit Singh, executive director of SALDEF and a 2004 alumnus. “Even worse, one out of five respondents said that when they see a Sikh man who is a stranger, they experience apprehension or anger. The report revealed that there is an anti-beard and turban bias that influences the lived experiences of Sikh Americans, and as a result, SALDEF is working in a variety of ways to combat that bias.”

The Langar on the Hill provided a platform to alleviate some of these apprehensions and misconceptions that are associated with the Sikh religion.

“Any community is better with more diversity, as that means more ideas and fruitful discussion,” said Harleen Kaur, a senior at the University of Michigan and one of the SikhLEAD interns that helped promote and run the Langar. “Sikhs, in particular, have faced bias and hate crimes due to negative media perception of a turban and beard, especially post-9/11, so it is important to show people that Sikhs are an important contribution to American society. Unfortunately, we must fight for our right to be here but it is an effort that must be made.”

However, the Langar on the Hill event was not a politically charged event, but rather an opportunity for young, devout Sikhs to inform and teach the public a bit about their faith.

“Even if we don’t explicitly educate others, seeing Sikhs acting in a positive and professional manner creates that positive image and furthers the number of people who have a good image of Sikhs, which they will remember the next time they meet one or hear about one or see one,” Kaur said.

Emulating the Harmandir Sahib, a Sikh temple in Amritsar, India, where 100,000 people are served free meals each day, hundreds of attendees removed their shoes and filled their plates with common vegetarian Langar foods, including lentil and potato dishes.

For Kaur, working on bringing the Langar to Capitol Hill and teaching others about her faith was worth the effort put in by her and the other 12 SikhLEAD interns.

“It was great to see the finished product, as it was a huge feat to carry out on top of our busy internships. We were happy to take advantage of an opportunity that we felt fortunate to have and use it to spread the beliefs of our community and faith,” she said. “Hopefully it will increase positive energy towards Sikhs and minorities in general, which will lead toward better policies for minorities and more inclusion.”