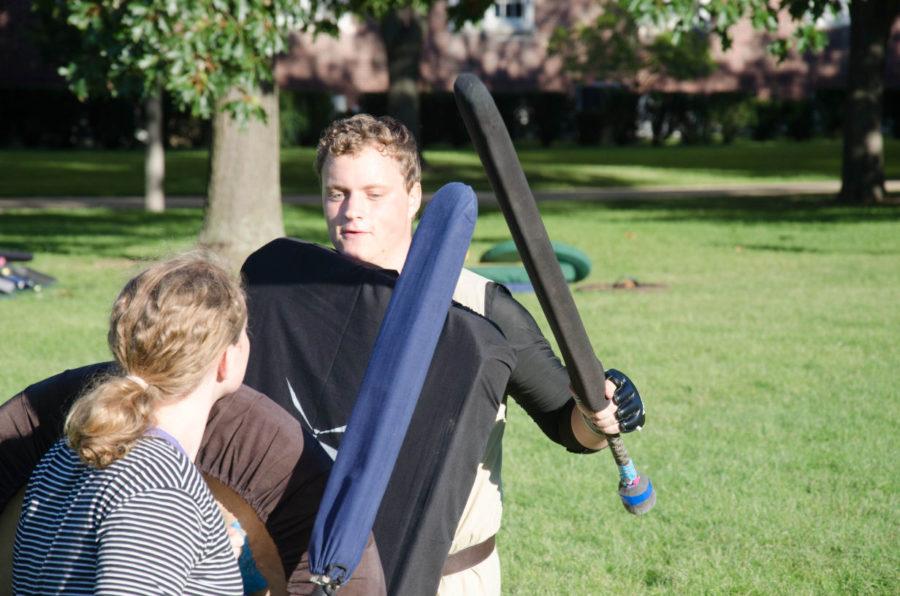 Member’s of the University’s Belegrath Medieval Combat Society practice on the South Quad on Monday evening to prepare for the RSO’s frequent battles and tournaments.

Every Monday and Wednesday night, the South Quad becomes a fierce battlefield for approximately 100 students.

Their medieval-inspired garb may confuse passing pedestrians as they travel past the battlegrounds. But the knights, marshals and commanders are hard at work as the fights and battles begin.

The foam-covered wooden shields and swords are put into play as club members run up and down the field striking and “killing” each other, in what is described as a medieval fighting sport — Belegarth.

Originating in 1979, the Belegarth Medieval Combat Society has allowed men and women to get their own medieval combat experience through foam combat.

Belegarth is a game in which participants harness elements of both history and fantasy to fight in different realms and with various participants in each battle. The fantasy elements are typically used from J.R.R. Tolkien’s “The Lord of the Rings” books.

The University’s realm of Belegarth, Numenor, has been around for around 25 years, according to Brendan Neunaber, previous president and active member.

Neunaber, a 2014 alumnus in Engineering, went on to explain that this specific realm of Belegarth started as a completely independent entity of the University.

Some people from the surrounding area started practicing the sport without formal organization but soon started to capture the attention of University students. This led it to becoming an official Registered Student Organization, Neunaber said.

Many current members said they learned about this activity at this year’s Quad Day.

Zoe Travis, sophomore in ACES, explained she knew nothing about the martial-arts-style sport prior to Quad Day but after learning more was quickly hooked.

“I just saw it on Quad Day, and it looked really cool,” she said. “I just came out and never left. It’s a great group of people.”

Despite Belegarth realms existing across North America and even crossing over into Europe, many participants said they were unfamiliar with the sport until they came to the University and were formally introduced to everything it has to offer.

Brendan’s brother, Scott Neunaber, is the current president of the Numenor realm and a senior in LAS. Scott explained that anyone can get involved in whichever part of the sport they find the most interesting.

“While some members exclusively enjoy the fighting aspect, others enjoy making and designing the garb, and there are individuals who are especially talented when crafting and building the foam weapons and shields — there is so much the sport can offer,” Scott said.

The actual fighting is what draws most participants’ interest though.

To those who are unfamiliar with the Belegarthian world, the fighting appears to be a combination of precise, sharp and decisive martial-arts-inspired moves.

The goal is to “kill” someone, Travis said, which essentially means either hitting their abdomen region or what is considered his or her body for a total of two points. Striking a combination of two of an opponent’s limbs also totals two points.

Along with their biweekly practices, the group also participates in events that span the course of a day, weekends and even entire weeks.

According to Travis, these events consist of tournament-style fights, banquets and feasts, and other social events for members of other Belegarth realms to meet and stay connected with the larger community.

Scott Neunaber calls the tournament scene, “the trick,” or the way to really get people interested and involved.

“There are many foam fighting sports, but Belegarth is one of the largest,” he said. “Tournaments are a way for new members to grasp that.”

While Numenor is a RSO at the University, the group also has participants from the surrounding areas and University alumni that continue to want to stay involved in the sport and continue to foster relationships they have made through the organization.

“We’re all looking for our home away from home and some stability,” Scott said. “It really does become your family.”