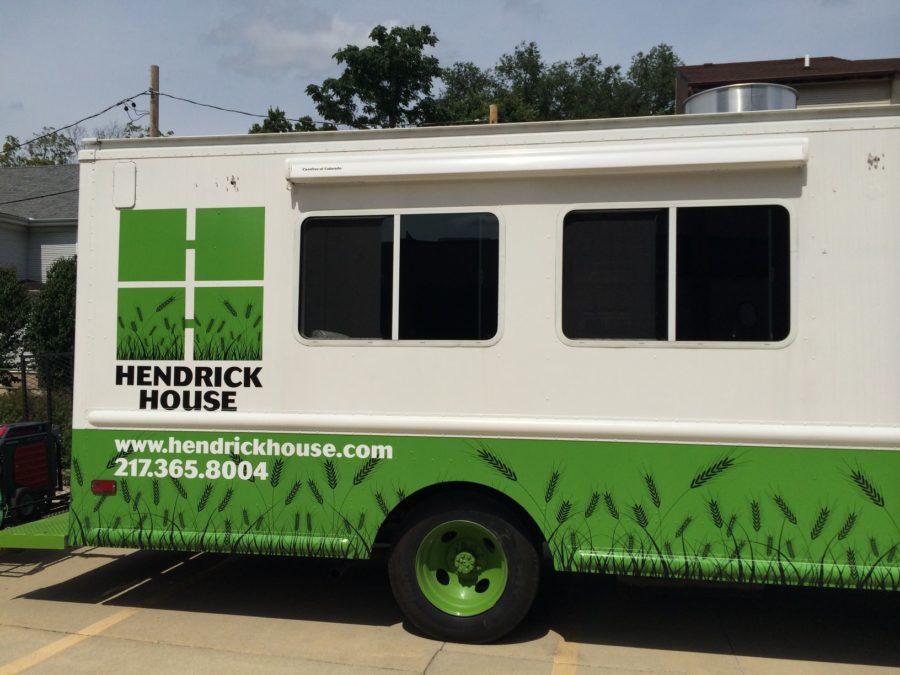 Between working special events, the Hendrick House food truck sits in the parking lot of the West Green Street location on Wednesday.

After a two-year search for the right vehicle, Hendrick House now has its own food truck that can be seen out and about in the Champaign-Urbana area beginning in early to mid-October.

Hendrick House’s Diane McNattin said they began to look for a truck after reading about the growing popularity of the food service trend in magazines.

“The outpouring of calls asking us where we’re going to be and what we’re going to be serving has been way more than what I had ever anticipated, and actually we weren’t really prepared for that,” McNattin said. “But I think that that’s just a testament to the great food that we provide.”

The truck does not currently have a routine route but instead will work at events. McNattin said serving Hendrick House’s current clients, such as its Greek and dormitory customers, will be the truck’s main use this fall.

The only time the food truck is planning to drive and sell food, outside of working events, is during summer or spring break, according to McNattin. It is during these times that Hendrick House does not serve its current clients.

Hendrick House Greek Accounts Manager and food truck chef Adam Whobrey said the truck is one of the ways Hendrick House can display its message about fresh, sustainable and organic food.

“… (We) thought one of the more fun ways to let people on campus know that we have that message and that idea would be to see if there’s a food truck available for us so that we can go around and actually show people,” Whobrey said. “(We wanted to) bring the food to them, essentially, rather than find a way for them to come to us.”

Due to some of the restrictions from Champaign’s ordinances, Whobrey said he “can’t necessarily just drive around with it.”

Instead, he said the truck may take on tailgating events or lunch appearances.

Whobrey compared working for Hendrick House’s dining hall and working on the food truck to “apples and oranges.”

“The food truck is a much smaller scale volume-wise, but at the same time, you run into a lot of planning issues, like you have to make sure that you have everything completely planned out and thought out,” he said.

One example he gave was how big of a problem not having a cutting board can be. In the dining hall, it is easy to simply access the supply of kitchen equipment. It becomes a problem when Whobrey is on the truck, miles away.

Former Food Truck Manager Liz Mansfield worked the food truck for part of the summer. She said the food truck gives chefs the chance to “do fine dining, except it’s on the road.”

People can hire the truck and discuss the menu with Hendrick House, according to Whobrey. Because of the size of Hendrick House’s kitchen, Wobrey said cooking on the food truck gives him the opportunity to change the menu depending on what the event is.

“We’re really going to use this semester as a lot of trial runs and working things out and seeing how exactly we can maximize the food truck’s potential,” he said.