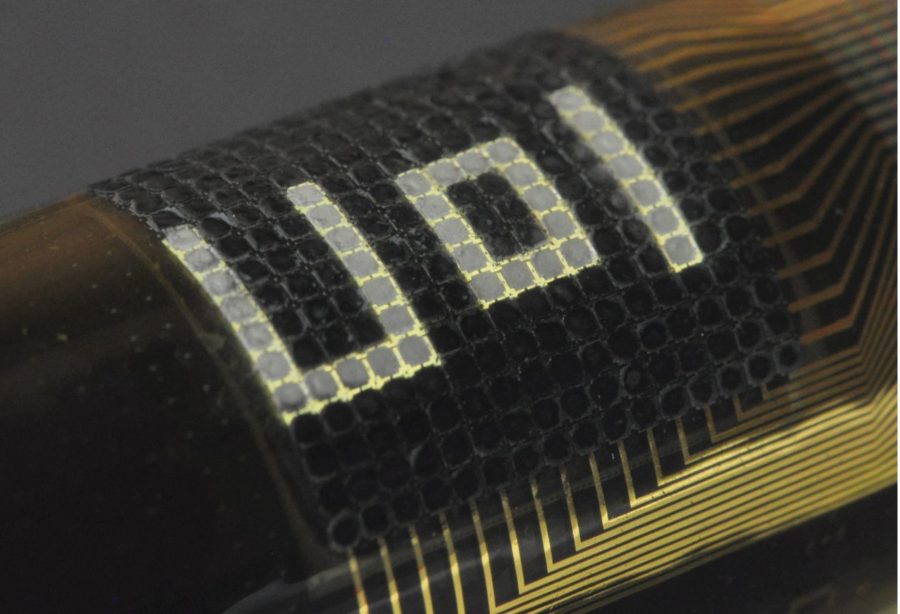 Materials Science and Engineering Professor John Rogers and his team tested the material by changing pixels to create the abbreviation of the University.

Nature has inspired many an artist, musician and writer. And now, nature’s color-shifting creatures have inspired a scientist: John Rogers, a University materials science and engineering professor.

Intrigued by the camouflaging capabilities of animals like the cuttlefish and certain types of octopus and squid, Rogers and his team have developed a flexible material that also has the potential to change color in the blink of an eye.

The project, funded by the Virginia-based Office of Naval Research, aimed to examine the engineering capabilities for building “adaptive camouflage” similar to a mechanism used by marine cephalopods.

“What (the Navy) was hoping to do was bring together a really diverse and interdisciplinary team (of scientists) to take a look at cephalopods and think about the foundational mechanisms that are governing their sophistication in adaptive camouflage,” Rogers said. “And see if you could begin to tease out some engineering principles for building man-made systems that would offer that type of capability.”

Cephalopods’ skin consists of three layers that are responsible for imparting the creature’s color. The two bottommost layers of skin are reflective, while the top layer contains sacs of pigment that color the surface.

These droplet-like sacs of pigment are surrounded by muscles radiating outward, which affect how the pigment appears.

“The muscle tissue can pull that pigment sac into the geometry of a flat pancake,” Rogers said. “Then it’s consuming a much larger area across the skin, (and) you can visually detect the pigment in the sac.”

In addition to changing color, cephalopods’ skin changes texture to match their surroundings while using their camouflage.

“The skin is not just flat and static. It sort of develops a surface architecture that mimics its environment,” he said. “It’s just really breathtaking.”

Rogers said he and his team considered how they could replicate the sophistication of the animal’s internal system in a man-made system.

They ended up creating a flexible device with multiple layers to imitate the creature’s skin.

“Current camouflage is based on simple, static printed patterns,” Rogers wrote in an email. “Nothing available today provides active adaptability like our devices, and certainly nothing even close to what is found in cephalopods.”

Roger Hanlon, a senior scientist at the Marine Biological Laboratory in Woods Hole, Massachusetts, assisted Rogers in the process and brought a biological perspective to the project.

“The cephalopods change faster and with more diversity than any animal we know of,” Hanlon said. “My lab has been studying the functional morphology of the skin of these animals, and it’s that aspect that John Rogers and his team have looked at for inspiration in how to construct a man-made electronic display that can change color and pattern and even flex its skin, somewhat like the animal does.

“A very unique part of this paper is, number one, (Rogers) made it flexible. And making a flexible electronic display is not easy to begin with,” Hanlon said. “Second of all, they layered it somewhat along the lines of how the animal layers its skin.”

Hanlon also noted the significance of including embedded light sensors in the device’s design.

“What they came up with is really novel,” he said. “Instead of having one brain and having everything depend on one brain receiving information, collating it and sending it out, you now have little sensors out in the skin that can take some information and … affect some motor change or a visible change in the skin.”

While the team was inspired by the inner workings of these creatures, Rogers said they did not replicate them exactly in their devices.

“It’s very much bio-inspired engineering as opposed to bio-mimicry,” Rogers said. “We’re not trying to copy the cephalopod, because although it does a lot of great stuff, it doesn’t work outside of a water environment, for instance. But there are some really interesting concepts there that we’re able to pull out and implement in kind of an abstract way in our devices.”

While the word “camouflage” brings military to mind, others have approached Rogers with ideas for more civilian and consumer applications for this new material.

Anke Loh, a professor at the School of the Art Institute of Chicago, has reached out to Rogers to discuss the potential use of the camouflage sheet in fashion.

“This is appealing to her because it just creates some new possibilities for how you might do adaptive clothing,” he said.

People in architecture have also noted its potential for use in various living environments.

“There are a lot of different applications,” Rogers said. “Military camouflage is kind of the obvious one, but it’s interesting how many different people have come up and had ideas of their own.”

Steffie can be reached at [email protected]technograph.com.