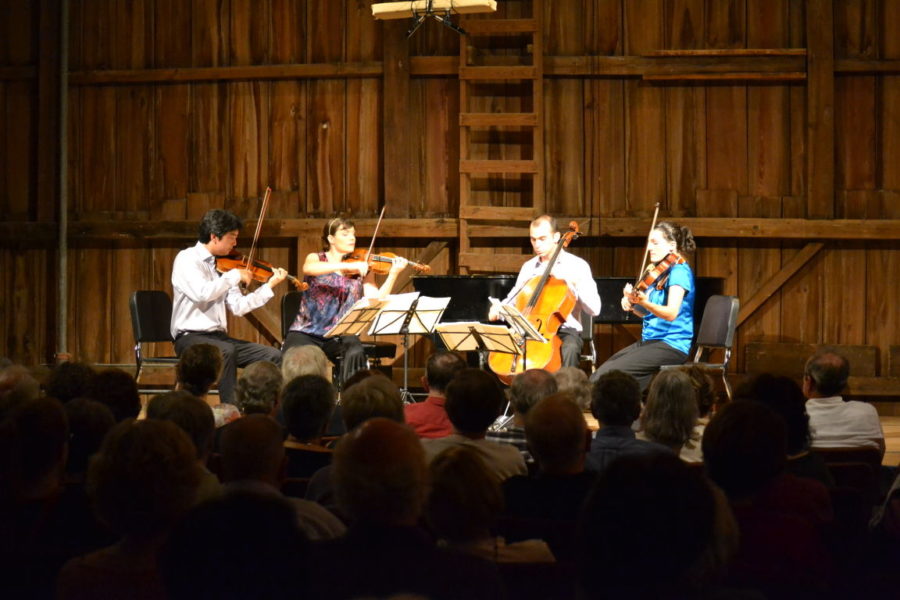 The eighth year of the Allerton Music Barn Festival in Monticello kicks off tomorrow with Jupiter Plus at 7:30 p.m. The annual festival has become popular in the area and typically sells out each season. Tickets can be purchased online at allertonmusicbarn.com

No, there won’t be a chorus of moos and oinks echoing from livestock at the 2014 Allerton Music Barn Festival. Instead, live performances of string, brass and other instruments will fill the barn, engaging audience members in a rustic setting.

The Jupiter Quartet is the opening act for the festival on Thursday night. The string performers are in their thirteenth year of playing together, and they are a very close-knit group. The two women in the group, Megan and Liz Freivogel, are sisters, and Megan is married to the group’s cellist, Daniel McDonough.

According to the group’s website, the Jupiter Quartet “places a strong emphasis on developing relationships with future classical music audiences through outreach work in school systems and other educational performances.”

The Jupiter Quartet will be performing Brahms’ Sextet No. 2 in G Major, Op. 36. The foursome will be joined by winners of the Quartet’s second annual Guest Artist Award, Kim Uwate on viola, Seungwon Chung on cello, and faculty artist Ollie Watts Davis. Their performance begins at 7:30 p.m.

On Friday, the University jazz faculty takes over, celebrating the 60th anniversary of Art Blakey and the Jazz Messengers. According to the Allerton Festival website, The Jazz Messengers performed in a “hard bop style” in the 1950s “with aggressive swing and powerful drumming.”

The Messengers were always about bringing jazz to a broader audience and featuring young, upcoming jazz artists and their music,” said Charles “Chip” McNeill, division chair of the jazz program at the University.

The jazz faculty at the University comprises Grammy award-winning artists and will be led by Charles “Chip” McNeill. McNeill is the jazz tenor saxophonist for Grammy award-winning recording artist, Arturo Sandoval. In the past, he has performed with Frank Sinatra, Sammy Davis, Jr., Joe Williams and Dizzy Gillespie.

“The venue is unique, and given a nice weather evening, it is a lovely setting for jazz and music in general,” McNeill said. “The audiences for the Allerton jazz concerts are always very attentive and seem to enjoy hearing the variety of music that the UI jazz faculty or students perform.”

On Saturday, a musical takes the stage in a concert version of “On the Twentieth Century.” The Allerton Festival website boasts that “this musical has it all: a temperamental actress, an egomaniacal impresario, a compromised Congressman, former lovers, protégées and a religious lunatic.”

“On the Twentieth Century” has been performed as a Broadway production. In this local rendition based on the play, the music follows the rhythms and motions of being on a train, as this is the setting of the show.

“?‘On the Twentieth Century’ is not a well-known musical, but it has a great score, lyrics and a very entertaining book,” said Andrei Strizek, associate music director, rehearsal accompanist and piano player in the pit orchestra for the production.

The creative team of Cy Coleman, Betty Comden and Adolph Green wrote a show that looks back to both the 1930’s musical and earlier operetta fashions but with a more modern twist.

While the Thursday, Friday and Saturday performances all begin at 7:30 p.m., the closing performance on Sunday begins at 10 a.m. The final performance celebrates a widely recognized name: Bach. The recently new director of choral activities at the University, Andrew Megill, will lead the Allerton Bach Choir, orchestra and soloists in performing Bach’s cantatas, including “O Ewiges Feuer,” “O Ursprung der Liebe” and “Herr,

All of the performances cost $30 for adults and $25 for students and senior citizens.

With the performances held in a renovated Dutch hay barn on a nine-acre historic farmstead, the Allerton Music Barn Festival planners hope that “music and nature will become one with the creation of a world-class music venue” for audience members.