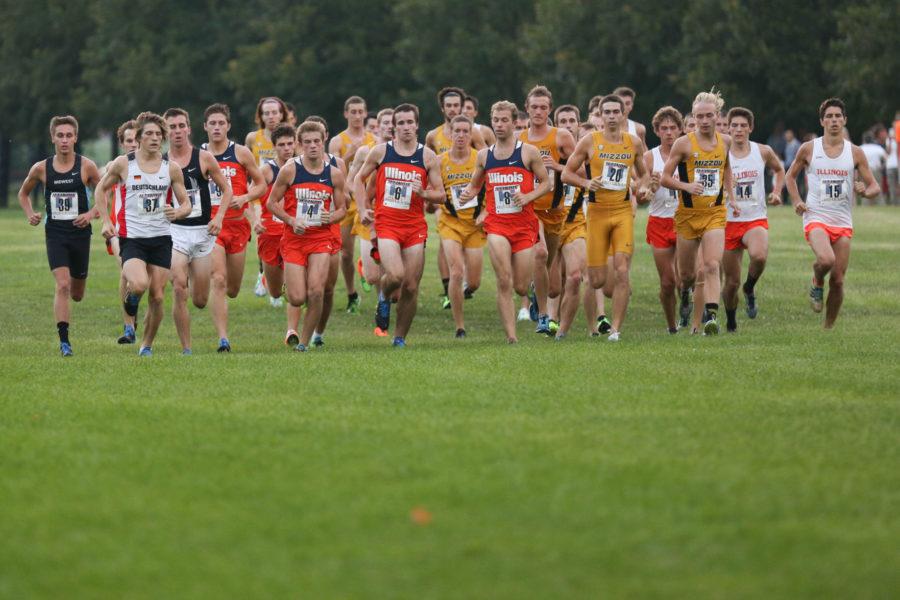 The Fighting Illini men’s track and cross-country team start their race during the Illini Challenge at the UI Arboretum on Aug. 29. After a three week break, the Illini will head to the Roy Griak Invite in Minnesota on Saturday.

After three weeks off from competing, the Illinois men’s cross-country team will face 30 other teams Saturday at the Roy Griak Invitational in Minneapolis.

Among those teams are No. 24 Texas and No. 29 Colorado State, both ranked according to the US Track and Field and Cross Country Coaches Association.

“This is definitely a big meet,” junior Paul Zeman said. “We want to go in and compete against them because we think that we are a team that can be running at the end of November at the NCAAs. This is our first chance to really go out and show that we belong.”

“I got 117 miles the last two weeks each,” Toepher said. “We don’t really focus that much on speed yet. It’s all a lot of strength and mileage, which will be good for the meet in Minnesota because it’s a strength course.”

Along with Zeman and Toepher, Stewart said other Illini runners to keep an eye on Saturday will be Ian Barnett, Bryce Bastings, Alex Gold and Garrett Lee.

Illinois started its season off with two dual meets, beating Missouri 28-30 in the Illini Challenge on Aug. 29 and lost to sixth-ranked Portland 19-36 on Sept. 6. In both meets, Zeman finished with the top time for Illinois. He was second overall with a time of 18 minutes, 43 seconds against Missouri and fourth overall with a time of 19:54.24 against Portland.

After starting the season off 1-1, Illinois is hoping that a good finish Saturday will jump-start its cross-country season.

“If we show what we have done in practice and show what we are capable of doing, we can surprise a lot of people,” Toepher said. “We can put ourselves on the map.”

Stewart is confident that the practice the Illini have put in during the three-week break will benefit the team as it returns to competition.

“We’ve put three really good weeks of work together,” Stewart said. “I’m really pleased with what we’ve been able to do. We haven’t had a bad day.”

Matt Gertsmeier can be reached at [email protected] and on Twitter @MattGertsmeier.