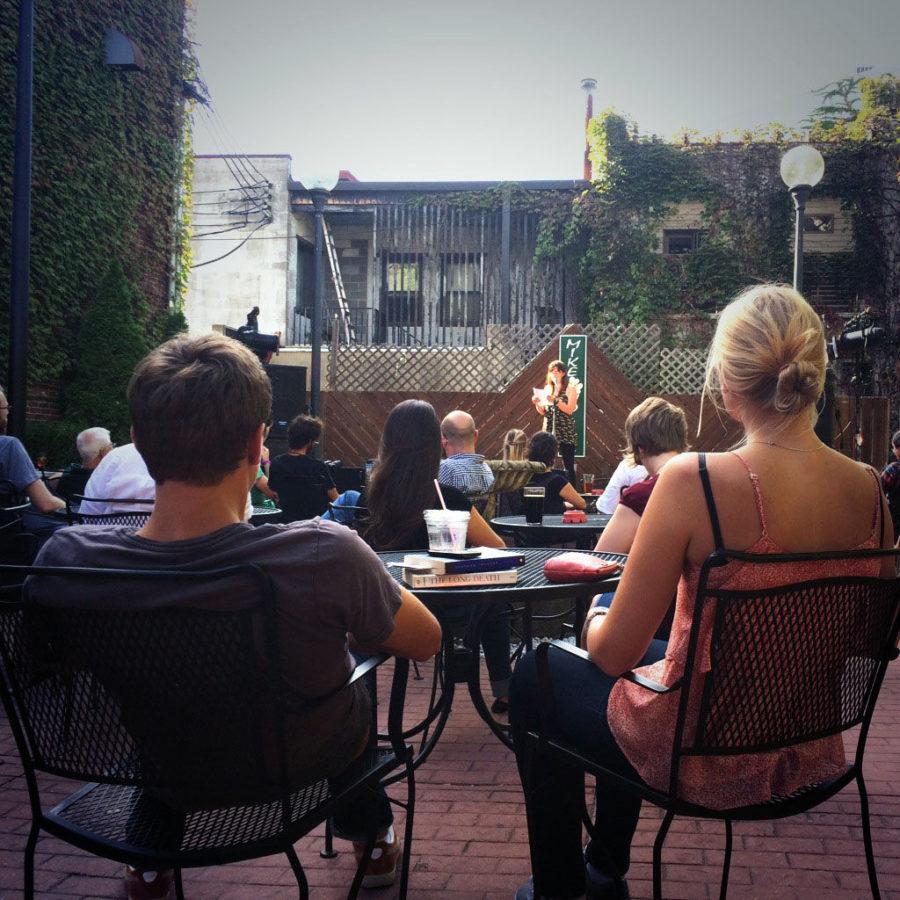 While Pygmalion Festival goers watch the music performances at the price of a ticket, book fans can enjoy the literary part of the festival for free.

Now in its second year, the Literature Festival grew to seven readings over four days, from last year’s four readings over two days. The Lit Fest will bring back its book fair as well as introduce a Lit Crawl, which is a two-hour series of very short readings occurring at several downtown Champaign venues this Saturday.

On Saturday, literary festival goers can head over to Esquire Lounge in Champaign where the book fair will be set up in the back, but the rest of the restaurant is open for usual business. There, fans can buy books from different presses, including those that publish the featured authors.

“We start by making a wish list of a few authors we’d really love to bring in,” Stanley said. “Sometimes it’s authors whose books we’ve read recently and loved, or authors whose work we’ve admired for a long time, or even someone we’ve seen read recently at another event who really impressed us.”

Peter Orner is one of the chosen writers and will be performing at the festival. Orner has a special connection to the University; his younger brother, Will, is a student at the University.

Peter is from Chicago, but he has moved around for some odd jobs.

He drove a cab in Iowa, worked at a sewer department and while in Mexico, counted the number of Federal Mexican Troops that drove by the area in their tanks. He even volunteered as an English and history teacher in Namibia in the early 1990s, which inspired his book, “The Second Coming of Mavala Shikongo.” The book took a total of 12 years to write.

“Strange how you can live an experience in a year and it takes over a decade to figure out how to express it in words,” Orner said.

While Orner’s writing process took him years, Scott McClanahan has writing down to a science.

McClanahan said to take 10 sheets of paper. Use the first sentence to hook the reader, then set up a scenario in the first four pages. Have something happen right after that, then a twist on page seven and tie everything up in the last few pages. And he also said to make sure not to forget about alliteration, so that “people will say they sound pretty.”

But with his book, “Crapalachia: A Biography of Place,” he threw that science out the window, he said. Instead, he decided to try a story that didn’t feel like a “typical literary story.”

“I have no interest in being a trained ballerina,” McClanahan said. “People should dance how they want to dance. I want to be the funky chicken.”

McClanahan said he coupled his fresh approach with a unique cover for his book. His latest book, “Hill William,” has a cover with crosses mounted in grass, upside down. “Crapalachia” has a bird with a man’s head sitting in front of a mountain on its cover, and The Washington Post decided to judge McClanahan’s book cover.

“Washington Post said that Crapalachia was a bad cover,” he said. “However, I think the font The Washington Post uses as their logo makes it look like we’re in Ye Olde England. Blimey!”

Because of his travels to promote his books, Mclanahan said he has met a lot of close friends over time. He’s never been to Champaign-Urbana before, but he said he is hoping to meet some more people.

Tarfia Faizullah and Jamaal May, two other authors showcased this year at Pygmalion, said they understand the bond of friendship through writing. The two work together, and Faizullah calls May her partner in crime.

“It’s a gift to work closely together both on and off the pages of the work we publish and the poems we write,” she said.

Faizullah and May aren’t the only team at the festival, though.

Ted Sanders is an author featured at the festival and also a lecturer at the University in Creative Writing. As he has prepared to talk about his debut novel for his middle-grade series, “The Keepers.” Sanders has watched his wife, Jodee Stanley, co-organize the Literature Festival.

“Pygmalion is a great festival, obviously, that seems to keep getting bigger, and it’s all very slickly put together and they’re getting bigger and bigger names to attend. It’ll be a cool four days,” he said.

Rebecca can be reached at rrjacob2@dailyillini.com.