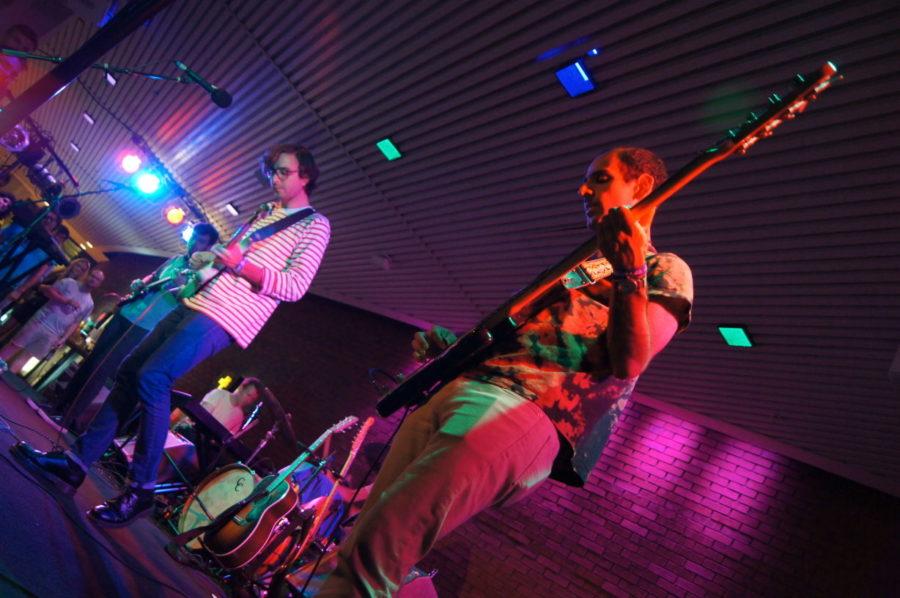 Real Estate performs at the Krannert Center for the Performing Arts on Thursday night.

The 10th annual Pygmalion Festival kicked off Thursday night with both familiar and fresh faces.

Beginning at 10 p.m. at the Krannert Center for the Performing Arts, Elsinore opened for Real Estate with its tenth performance for the festival.

At this point, the festival is as closely tied to Elsinore as the band is to it.

After Thursday’s show, the Champaign-based indie rock band has played in every Pygmalion Festival since its beginning in 2005, Ryan Groff, lead singer, announced to Thursday’s crowd. And the home-field comfort showed on stage.

With a three-man horn section and accompanying violinist, Rachel Wittrig, Elsinore filled out the small stage in Krannert’s lobby as audience members wrapped around its three protruding sides.

Most of the crowd swayed or nodded along while a few attendees sat a ways across the lobby along the far walls at a collection of wooden tables.

The set largely pulled from the band’s third and latest release, “PUSH/PULL.” I thought Groff’s strong and soaring vocals carried the performance, often reaching into falsetto and vibrato sustains that reverbed through Krannert.

He’d animatedly sing each line as well, bouncing his long, curly hair and locking eyes across the crowd while his expressions would rise and fall with the music. The band kept requesting to raise Wittrig’s violin’s volume to get more of her melodic accompaniment into the sound, and I found the interplay between hers and Groff’s performance created a mesmerizing factor.

The three-man horns section also helped fill out the performance, although they played for only a portion of the show.

It was the type of overly solid and at-ease performance only a 10-year veteran band could pull off at the festival.

As Groff commended Pygmalion and its organizers for this year being “bigger, better, cleaner, more delicious,” Elsinore seemed to be at home on stage.

Following Elsinore’s set at 11 p.m., Real Estate took the stage as the first headliner to perform for the weekend.

The audience had filled out by then to stretch to nearly half of the entire lobby, spilling out onto all exposed sides. The lobby overhead lights remained on although subdued as stage lights slowly circulated through color wheels against the exposed brick wall.

As per usual for the New Jersey-based, dream-rock jam band, it began with an instrumental song, with each of the four members spaced across the stage.

The majority of the set played off the band’s 2014 release of “Atlas.”

I was slightly disappointed with Martin Courtney, IV’s vocal performance, never reaching the higher octaves in songs like, “Had to Hear.”

Overall though, the set list provided flowed from song to song, often switching up the lead vocalist and different tempos.

While the first half of the set upheld a pretty steady, relaxed energy, the different members began to loosen up and interact with the crowd. Alex Bleeker, the band’s bassist, humorously took interest in the section of the audience along the stage side to his left, often playing facing toward it and raising his hands for its enthusiastic response.

About midway through, the band stopped to take a poll of the crowd’s demographics, asking for raised hands on how many natives, visitors, college students and non-college students there were among us.

As I easily get lost into the repetitious loops of Real Estate’s long numbers, I’m always impressed by the band’s tight sense of timing and handle on the change-ups. The set finished with their longest jam of the night, gave a heartfelt thank you and ended without an encore.

I found the show to be a powerful, melodic-driven opening night, yet pretty energetically tampered and ambient.

In contrast to the rest of the festival’s mix of synth-pop, math rock, and electronic, Thursday night’s atmosphere felt like a smooth easing into what is still to come.

Sarah is a senior in Media. She can be reached at [email protected]