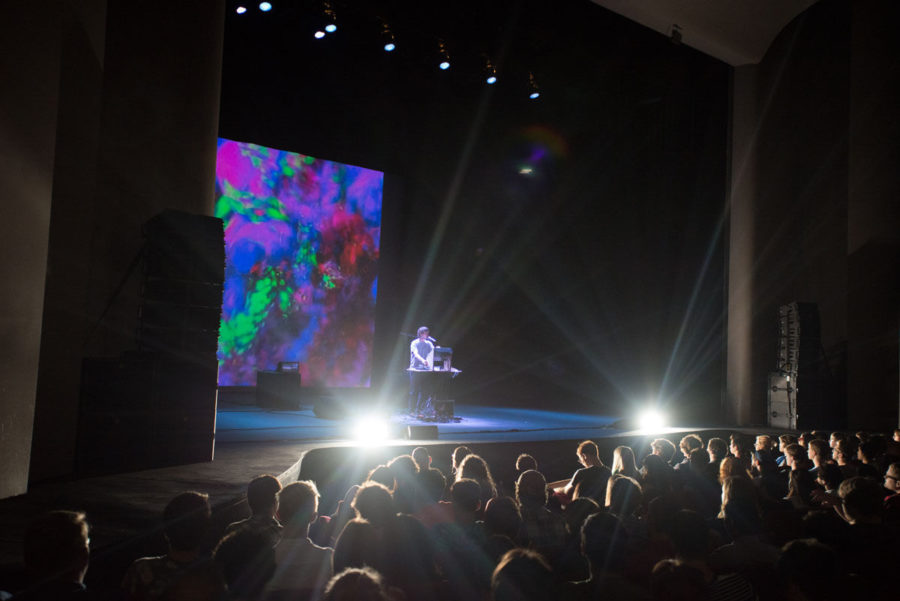 Sun Kil Moon opened for Panda Bear at 7:30 p.m. at the Tryon Festival Theatre in the Krannert Center for the Performing Arts.

While this may have been the bands’ first performance at Pygmalion, neither is a stranger to the stage. Mark Kozelek, lead singer for Sun Kil Moon, released his first album with the alternative rock Red House Painters in 1992. Panda Bear, also known as Noah Lennox, is one of the founding members of Animal Collective and released his first self-titled album in 1998.

Sun Kil Moon walked out to a sold-out house. Kozelek promptly asked that all the lights be lowered, repeating his request until his face was half in shadow. With the audience hushed, the dim lights created an intimate atmosphere, making the two-story auditorium seem small.

Kozelek idly tuned his guitar while chatting amicably between songs, but when he counted down for the band and strummed the first chord, his artistry shone.

Making great use of the Tryon’s acoustics, Kozelek’s vocals were front and center, flowing through the room strong and clear. They were accompanied by gentle guitar melody and occasional vocal harmony from his bassist. Underlying soft piano and percussion blended effortlessly throughout. Occasionally, the percussion and bass would build, becoming harsher and fighting for dominance with Kozelek’s shouted lyrics, which always prevailed.

The low lighting and casual atmosphere were the perfect setting for Sun Kil Moon’s hauntingly personal songs. The majority of the set came from “Benji,” their 2014 release featuring many autobiographical tracks by Kozelek. For the last few songs of the show, Kozelek set down his guitar and picked up the microphone, pacing around the stage as if talking on the telephone about past loves and losses.

Despite heavy, emotional lyrics, Sun Kil Moon kept their commentary light. They were very complimentary to the crowd and crew of the “Polygamy Festival,” as they called it. Kozelek remarked that Champaign-Urbana was “crazy, wonderful; I love it.”

Panda Bear’s 9:30 p.m. set was a sharp contrast to the previous casual atmosphere in every way.

Lennox, looking small on such a large stage with only a microphone, mixing table and four strobe lights, greeted the audience with a simple “Hey there.”

It was quickly evident that Panda Bear’s set was as much music as it was modern art.

A large screen showed a carefully curated video matched with bright, frantic strobes. The video was timed to Panda Bear’s songs, reflecting the mood and content.

Painted models screamed and cried along with grating electronic screeches and red overhead lights. Each song merged with the next as the audience interjected applause.

At one point, when the music intermingled with lilting harps and mournful lyrics, two reptilian-painted nude women caressed each other on a red background, eliciting a very positive response from the audience.

This gentle, emotional display was soon replaced with the flashing image of a beckoning skeletal figure and sharp, indistinct consonants yelled into the microphone by Lennox. The performance finished with the three demonic women appearing to vomit while either sobbing or, more creepily, smiling manically.

Impressed and slightly dazed fans probably pondered what the performance could mean. Sharon Li, a freshman in ACES, said she thought the video “didn’t mean anything” and was just a series of dreams and visions he had.

A hint can be in the working title of Panda Bear’s next album, “Panda Bear Meets the Grim Reaper,” as the music in his performance was composed of tracks from the upcoming album.

Inspiration aside, the infectious loops pulsed through the seats of the theatre and fluctuated with Lennox’s repetitious vocals to form complex tracks in his signature experimental-psychedelic style which he has been formulating for nearly two decades.

Panda Bear gave his thanks to the crowd, crew, and creator of his video and left the stage without an encore to a standing ovation.

Whether it was Sun Kil Moon’s soulful lyrics and mesmerizing harmonies or Panda Bear’s hypnotic visuals and synth, both performances were clearly impressive. Sun Kil Moon’s years on the stage have lent to their comfort, letting them play the songs easily and clearly take true joy in performing. Panda Bear’s time has cultivated an expertly-timed show, made possible only by practice.

Lillian is a freshman in Media. She can be reached at [email protected]