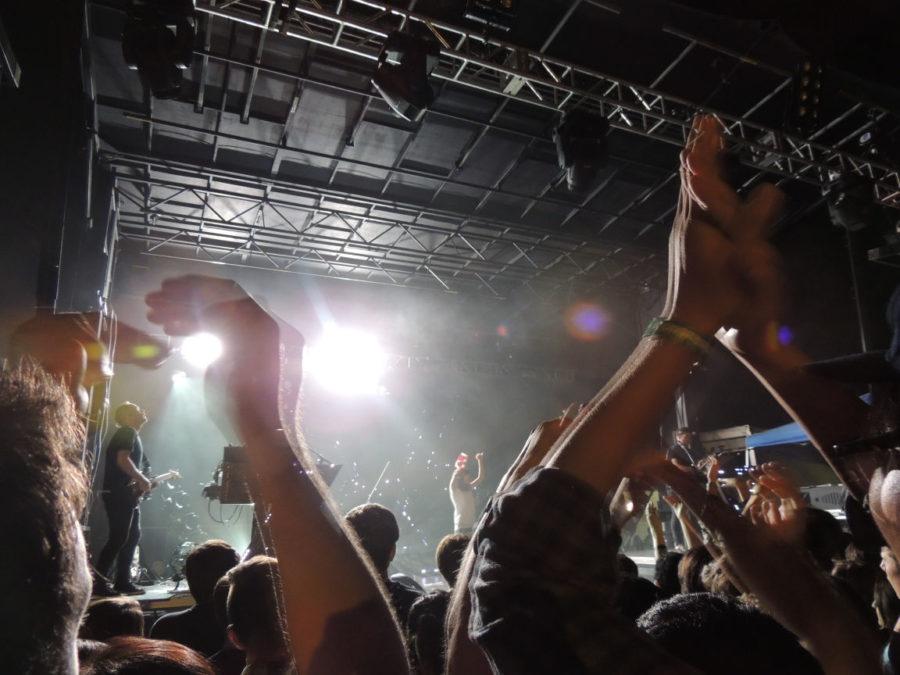 Rain or shine, Pygmalion’s Saturday performances at the Highdive’s outdoor stages were set to run. But luckily, the sun was shining.

The day’s lineup of back-to-back sets, all enclosed within the parking lot behind the Highdive, created the most traditional festival atmosphere of the weekend.

Attendees slowly filtered in throughout the day, dressed in summer wear for the 82-degree weather. Jutting off from the open crowd area between the two stages, an area for food trucks, merchandise and other sponsors lined the pavement with white tents. Many carried purchased handmade and vintage goods from the neighboring Made Fest. And all were there to enjoy the slew of musical performances with headliners Tycho and Chvrches to end the night.

Although doors opened at noon, the first band, Modern Kin, did not start until 2:45 p.m. From there, performances bounced from stage to stage with only 10-minute breaks. The Chicago-based Twin Peaks were one of the beginning bands to set the high energy of the day.

Considering the four members were a group of 20 year olds, I found it amusing to see them throw back cans of beer in between songs (sometimes during too) and nurse cigarettes while they played for an enthusiastic crowd.

In particular, Connor Brodner, the band’s drummer, went all out during the show by throwing himself energetically into every song, carrying a contagious vigor that transferred to the audience. Whether intentional or not, I thought his “hammer strength” t-shirt highlighted his playing style pretty well.

The party-like atmosphere continued with the indie-pop Miniature Tigers on the neighboring stage. Charlie Brand, the band’s frontman and guitarist, addressed attendees as “sweet little angels” and encouraged everyone with, “Let’s get our dance party on, guys.”

Aside from the climatic kiss between Brand and keyboardist Rick Schaier at the end of “Gold Skull,” I found the highlight to be their ending song, “Sex on the Regular,” which the crowd enthusiastically responded to the most.

Common Loon, a two-man duo from Champaign, finished up at the rock-oriented section of the night starting at 7:30 p.m. Having listened to the band’s album “The Long Dream of Birds” on their Bandcamp site, I found its live set to be accurate and tight, although straightforward. The crowd seemed scattered and relaxed at this point; the lull between the afternoon’s sets’ energy and the main events later in the night.

The lot generally had filled with attendees by this time, with long lines growing at the Cracked and Hendrick House food trucks. The Made Fest had closed up at 6 p.m. too, so nearly everyone attending the festival was either standing in front of a stage, waiting in line or grabbing a drink or meal inside the Highdive.

Unfortunately, given the event’s location, there’s really no grass areas to sit down and enjoy as per usual with outside “summer” festivals. Few made due with the two padded circular seats outside the bar.

Finally, Tycho took the main stage at 8:20 p.m. Scott Hansen, musician and graphic and photographic visual artist known as ISO50, brought his photographic and design creations to life as a giant projection behind his live performance.

The San Francisco-native and two additional performers stood spaced out across the large stage as an hypnotic mashup of landscape photography, geometric shapes and pops of color accompanied the ambient electronic music. It was the perfect combination of relaxing complexions and captivating flow. The lack of a vocal narrative made the visuals pop and lead the music’s dynamics. The crowd remained generally quiet except for the few times Hansen paused to greet and thank the audience.

By the time Chvrches took the stage (late) at 10:45 p.m., the crowd was beyond rowdy. Several uprisings of demanding chants started and fell out before the booming bass and flashing strobe lights announced the beginning of their set. I could feel the reverberations of the synthpop electronic beats rattling in my throat before Lauren Mayberry’s youthful vocals kicked in to the roaring crowd’s delight.

The light show was both over-the-top and amazing to watch. On stage, Mayberry stood centered in between the two electronic musicians, each standing on a lighted platform. A large geometric light piece stood as a backdrop and pulsed various patterns of colored dots along with the music.

The occasional bursts from the flooding strobe lights made it hard to visually adjust to the performance in the darkened venue, but the crowd danced on. Each time Mayberry paused to address the crowd, her small Scottish accented voice was overpowered by the audience’s response. More than any other performance, attendees joyfully danced and cheered along with the music, hands raised to the open air.

Despite the late start, Chvrches disappointedly played only a portion of their allotted hour-and-a-half set. But before finishing up the outdoor portion of the night’s festivities, Mayberry invited the crowd to visit their DJ set at the Highdive, where the party presumably carried on.

Sarah is a senior in Media. She can be reached at [email protected]