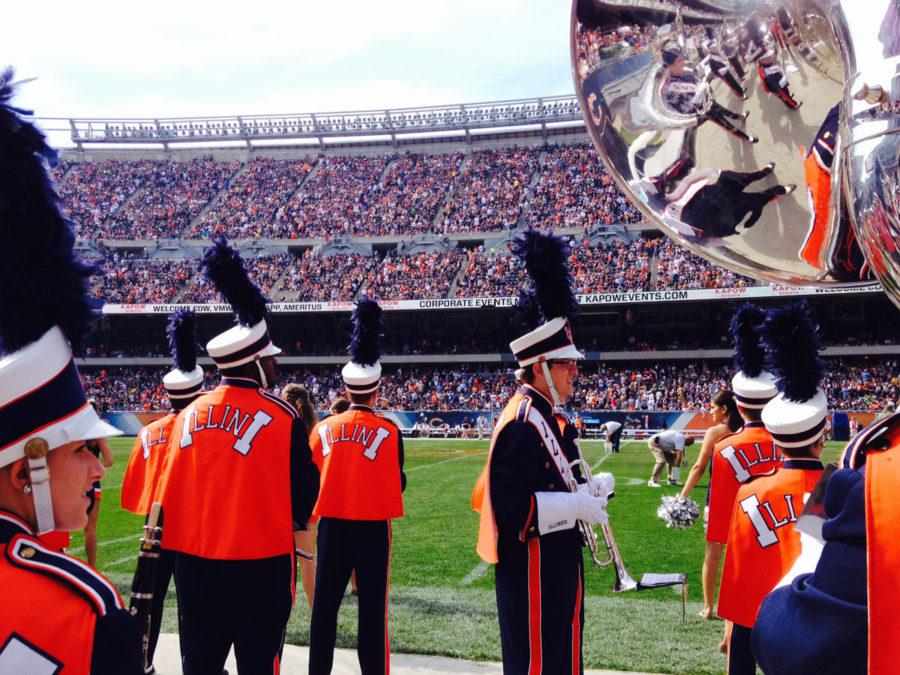 The Marching Illini performed during the Bears vs. Packers halftime show at Soldier Field at 3 p.m. on Sunday, followed by a performance at Navy Pier.

The stadium is about the same capacity as Memorial Stadium. It feels familiar too — the fans are all clad in orange and blue.

But there’s a big difference. It’s Soldier Field. There’s about 62,000 fans in the stands, most of whom aren’t cheering on the Illini but screaming at the Chicago Bears to pick up their fight against our cheese-headed neighbors to the north — the Green Bay Packers. And there’s alcohol involved.

“We love the band!” a young couple sitting on the 20-yard line slurs while hanging over the barrier, beer in hand. “I-L-L!” others yell, while we respond “I-N-I!” for the 32nd time that day.

As the clock ticks closer to the end of the second quarter, we watch from the field as the stadium roars against a referee’s call. The Packers topped out the half at 14-10.

It was time to give the Bears fans something to cheer about. It was halftime.

Sunday marked the third time in the past three years the Marching Illini has performed at Soldier Field for a Bears game.

The first time was 2012 and it was Professor Barry Houser’s second season as director of the Marching Illini.

Houser came to the Marching Illini in 2011 after serving as director of bands at Eastern Illinois University. He had taken EIU’s band to perform at Soldier Field for the three consecutive years leading up to his new position at the University and thus had a relationship with the Soldier Field staff.

“I was looking to re-establish the relationship that the Bears and Illinois always had,” Houser said. “Going back to Red Grange, and why our colors are orange and blue.”

The Marching Illini did a good job that first year, and the Bears, who pay for the band’s transportation and lunch, continued to ask us to come back.

At 6 a.m., the Illini drumline was the first to depart campus for Chicago on Sunday as they played with the Bears drumline outside the stadium prior to the game. The rest of the band arrived in time to be herded into the labyrinth that is the tunnels of Soldier Field after the noon start of the game.

Nervous chatter filled the tunnels as game predictions were made and the Illinois’ Saturday loss to Nebraska was rehashed. Others silently studied their music while running through drill sets in their heads.

We were given the signal to enter the field with about a minute left in the second quarter. The grass felt soft under our feet as we gaped at the towering NFL players standing just yards from us. The sun shone bright as we stood on the field, sweating in our wool uniforms fresh back from the dry cleaners. Our baldrics, the reversible sashes that cross our chests, were turned to the Illini side, celebrating the Illini’s undefeated record at home. We took time to gaze into the depths of Soldier Field with layer upon layer of stands and balconies.

“Whenever I step out of the tunnel onto the field, I always get the chills because there are so many different people high up the rafters,” said Mark Lyons, a fifth-year senior trumpet player and student in LAS. “It’s really exciting to perform at any other field besides Memorial Stadium, but especially an NFL stadium.”

For the past few years, the Marching Illini has become accustomed to performing for fewer people at Memorial Stadium as the football team’s record plateaus and attendance drops. While Memorial Stadium’s capacity hovers around 61,000, the highest attendance this season was 41,019 for the Texas State game on Sept. 20.

So it’s not unnatural to be excited to perform at another stadium where the fans come in droves and tailgate like there is no work tomorrow.

As the clock hit zero, band members took the place of the football players and lined up along the sideline. Our show was to the music of Queen, and our first number was an arrangement of “Fat Bottomed Girls.” When we marched out onto the field and hit our first set, I immediately tuned out the crowd.

The Marching Illini’s job is to entertain fans, but we entertain ourselves just as much. When we’re on the field it’s so easy to get wrapped up in the music while remembering where to march next: “OK, I release this note on beat three, and on the next measure I need to march 16 steps backward to form diagonals.” So looking up at the crowd and soaking in the grandeur of it all is a conscious decision that needs to be made.

“In the tunnel, I was getting really nervous and everyone was hyping it up,” said Matt Bonderski, a freshman sousaphone player and student in Engineering. “But then when we got on the field, all of that just went away and it got really exciting.”

That excitement lasted for about seven minutes. We played “Bear Down Chicago Bears” as we marched off the field, being met by Bears and Packers fans alike reaching out to high-five us.

We then loaded seven coach buses and headed over to Navy Pier to play a short concert at the point of the pier.

After a break for dinner, it was time to hop on the buses again and travel home to Champaign.

On the ride home some talked, some slept, some studied, some sang karaoke. With a performance behind us, the Marching Illini continues its legacy as the first band to perform a halftime show. After all, this is where it started and will never stop.

Kirsten can be reached at [email protected]