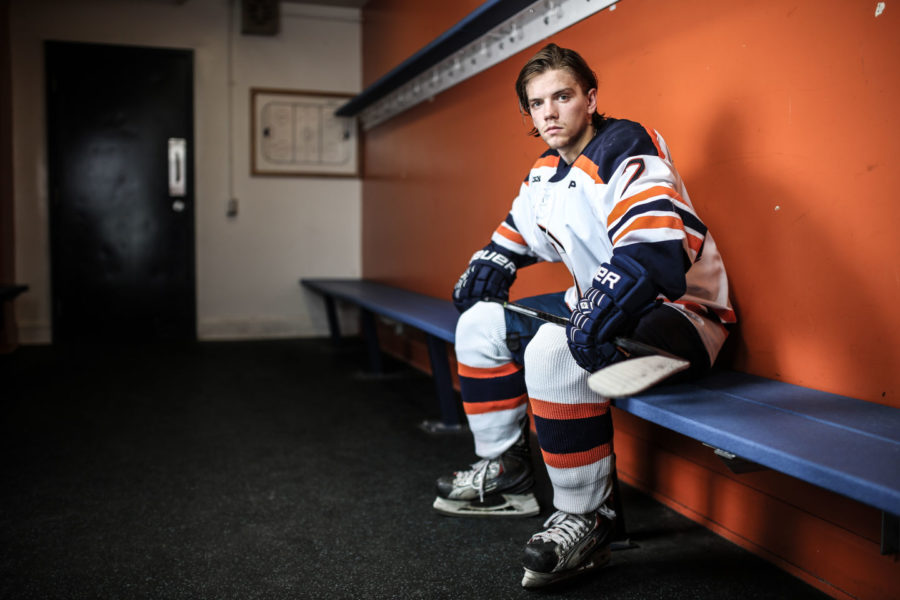 Jack Soneson is back on the ice after two years.

In his first ever game at the Big Pond, left wing Jack Soneson looked right at home.

He started the Illinois hockey team’s scoring barrage with a goal just a minute into the game. The goal prompted a steady chant of “It’s all your fault!” from the home crowd directed right at Michigan State goalie Brent Schwarz.

The early goal didn’t just pump up the crowd — it also created momentum for the Illini in the first period. The team scored four unanswered goals, two of which came off assists from Soneson.

“Any time you can score in the first five minutes of the game, it sets the tone in the way that we want it to be,” head coach Nick Fabbrini said of Soneson’s goal. “That line was really clicking for the whole first period on Friday, until we started to get into all the penalty trouble and the lines had to change. For Jack to get us off and running like that was a big boost.”

With a seemingly insurmountable lead heading into the second period, the Illini started to fall apart. A total of 51 penalty minutes derailed Illinois’ chance of a blowout victory in its home opener. Michigan State scored four unanswered goals of its own to make up for the ground it lost in the first period.

The game had to be decided in a shootout, and with the opportunity to win the game, Soneson gave the Illini fans another chance to break out into the mean-spirited chant directed toward the opposing goalie.

“I watched my teammates go, and the ice was pretty torn up at that point,” Soneson said. “As they were coming off, everyone on my team was telling me to just shoot at his weak side. He left his lower left side open, so I just put it in.”

Soneson may have done the most damage with his shot in the Friday game, but he considers himself to be more of a pass-first type player. During the two-game sweep of the Spartans, Soneson had four assists, more than any other player on either squad.

Fabbrini considers the team lucky to have a player with a pass-first mentality like Soneson because it creates space for other players on the team to score goals.

“He’s got two guys on his line that can shoot the puck, between playing with Lozi (Chris Lozinak) and Yoshi (Tadayoshi Shibata),” Fabbrini said. “Any time you can play with guys like that who have a little bit of a nose for the net, it’s nice to have a guy who looks to pass first playing with them. I think that’s something Jack does. He creates space for himself and makes room for his teammates.”

Soneson joined the hockey team this season after transferring to Illinois from Missouri last year. When Fabbrini started coaching the Illini in 2012, he tried recruiting Soneson to come play for the team, but by that point the deadline to apply to Illinois had passed.

Despite not playing on the ice the past two seasons, Soneson still continued to pursue his passion for hockey in the roller rink. Soneson was a member of the Missouri and Illinois club roller hockey teams, leading the latter in both points and assists last season. Since trying out and making the ice hockey team this season, he has had to readjust to the physicality of the sport.

“Roller hockey is definitely different from playing on the ice,” Soneson said. “I had to make some pretty big adjustments. I haven’t gotten hit like that in a while, but guys on the team have helped me make the transition.”

Soneson’s production seems to suggest he has acclimated himself back to the ice. He leads the Illini with eight total points, which includes a team-high six assists to go along with two goals to start the season.

Personal stats, however, don’t mean too much to the starting left wing, who just wants to help his team continue its five-game winning streak. With the talent level of those around him, Soneson has no regrets about joining the squad.

“We have a great program here,” Soneson said. “We have a pretty good history in the ACHA. We have won a couple national championships. Playing in front of that home crowd isn’t a bad bonus either. I think the guys around me are so talented, so I thought that if I wanted to have a great season, this is the place to do it.”