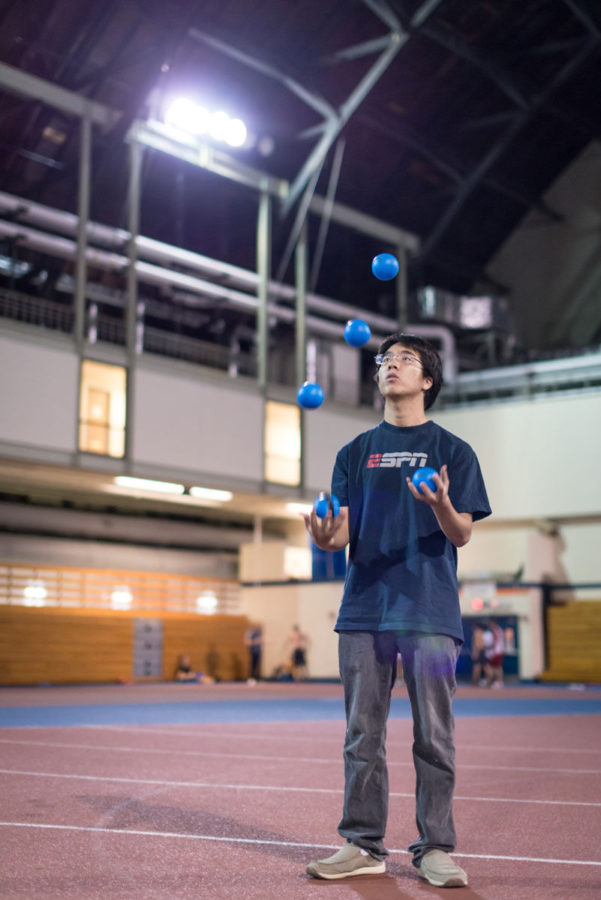 The anatomy of a juggler is an amalgamation of coordination, concentration, perseverance and skill. The eyes are trained forward, with a continuous, focused gaze. The hands move in a fluid, synchronized motion. And yet, the serious stance juxtaposes the bright colored balls, the informal setting and the laid-back personalities of the members of the Illini Juggling and Unicycle Club.

“The Illini Juggling and Unicycle Club has been around for about 30 years,” said Antonio Daniel II, club president and senior in ACES. “Our mission statement is just to provide a meeting place for fellow jugglers and additional circus acts.”

Members of the club meet every Monday evening, usually at the Armory from 7 to 10 p.m. Sometimes they practice on the Quad a bit earlier, at around 5 p.m.

“It’s for all skill levels — super informal,” said Alex Page, first-year member of the club and sophomore in Engineering.

There is indeed a wide range of abilities. People attend who have never picked up a juggling ball before, and others come to hone in their more advanced skills.

“I’ve been a part of it since I was a freshman,” Daniel said. “I had zero experience, so I learned how to juggle and unicycle. I’ve been doing both of those things for about three and a half years now.”

The relaxed environment spurs conversations about techniques, practice methods, new skills and performance styles. Many members of the registered student organization bring their own materials, though the club itself has a variety of props for its members to use, such as colorful balls, clubs (which look like bowling pins) and rings.

Chris LaReau, a 1988 alumnus in Computer Science at the University, has been coming to Illini Juggling and Unicycle Club meetings for 30 years now.

He has been able to see the group shift gears throughout the decades, with some years stronger than others. Overall, he keeps attending just for the fun of it.

“My job is to basically sit on my ass and work all day, and (juggling) is totally the opposite of that,” he said. “I (don’t have to) think a lot while I’m doing it, and it’s a reasonable physical activity. It’s fun and very challenging.”

This seems to be the collective sentiment of the group — that juggling is an enjoyable low-stress hobby that can develop over time through practice.

“Juggling was something my uncle taught me,” said Raymond Li, four-year member of the club and senior in Engineering. “It was something I’d just been messing around with since high school and now into college.”

Other members, such as Daniel, have also mastered the feat of juggling and unicycling at the same time.

“When I was like six, my sister had a unicycle. Then it got stolen. So my parents got her a new one three years later, but she didn’t want it anymore, so I used it,” he said.

While the idea of learning to juggle or ride a unicycle may potentially seem like a daunting task to those with no experience, it can be done with the aid of the club members.

“I chose to join in the first place kind of as a dare by my friends,” Daniel said. “They told me I was the most uncoordinated person they’d ever met, because I’m really clumsy. … And I decided to join Juggling to see if I could improve that.”

The club has about 25 regular members so far this year, with over 70 people total listed on the roster. Many of these secondary members attend meetings intermittently or when their schedule allows.

“I always tell people to come and stay as long as they want,” Daniel said. “However much you get out of it is how much you put into it. So if you just want to stop by and learn one or two tricks, then that’s fine.”

Members of the club also have the opportunity to visit regional juggling festivals and conventions, Daniel said, allowing the group members to convene with others with similar interests.

Additionally, some Illini Juggling and Unicycle members perform at various places or teach juggling classes around the community. These involve local high schools, hospitals and other venues. The club’s biggest event is in April, where they host a juggling festival at the Armory.

More than anything, the Illini Juggling and Unicycle Club serves as a community and meeting place for those who simply enjoy these hobbies.

“On the outside (of the club), if you just go up to people and (say), ‘Hey, look what I can do!’ They’ll just say, ‘All right, that’s nice,’” Page said. “(In Illini Juggling and Unicycle club meetings) you get an opportunity to meet other people who like to juggle.”

Because of the group’s casual, laid-back structure, new members are welcome to join either to learn from a clean slate or simply practice what they already know in an inclusive environment.