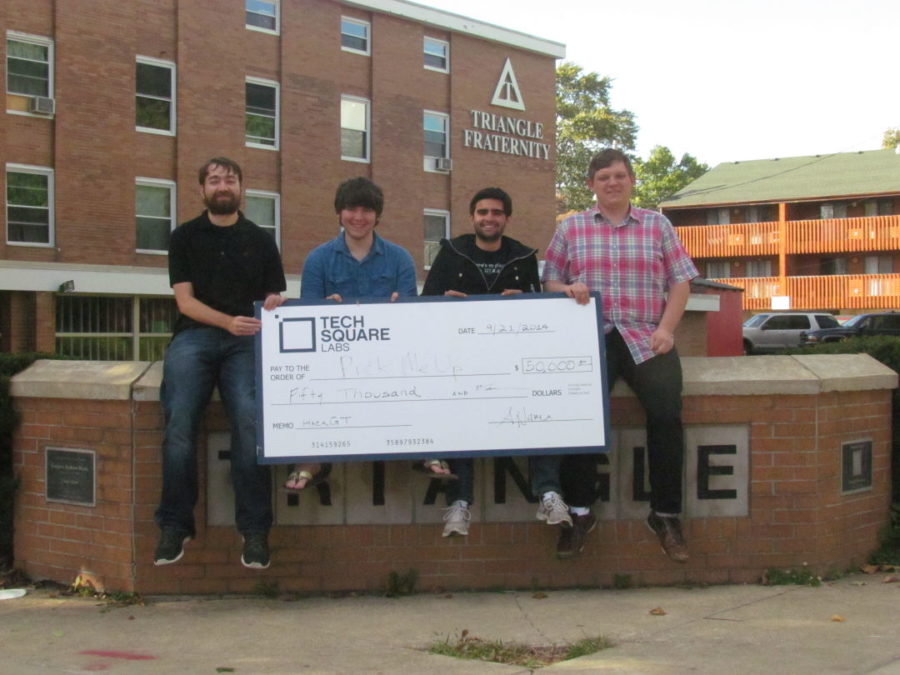 HackGT first-place winners, from left to right, Nathan Dolph, Kevin Scheer, Keagan McClelland and Kevin Jasieniecki hold a giant check in front of Triangle Fraternity that represents one of their prizes. The $50,000 on the check is an investment for the team and the future of their first-place winning software service, Pick Me Up.

Keagan McClelland, senior in Engineering, said this before the winners were announced at the first hackathon, HackGT, at Georgia Institute of Technology, otherwise known as Georgia Tech. McClelland said his nerves were not entirely because of the upcoming results, but also because of the coffee and lack of food in his stomach.

Along with McClelland, teammate Nathan Dolph, junior in Engineering, was also sick, but stood in the back of the auditorium during the announcement. It was from across the room that Dolph heard the team’s name announced as the first-place winners for its app, Pick Me Up, which was quickly followed by McClelland shouting “What?”

From Friday, Sept. 19, to Sunday, Sept. 21, the team competed in Atlanta along with over 1,000 others at HackGT, according to the hackathon’s website. It was there that attendees created hardware and software projects to compete for prizes at the school’s first national hackathon, according to the event’s Challenge Post page.

Over the three-day weekend, McClelland and Dolph, along with their teammates and Triangle Fraternity brothers, Kevin Jasieniecki and Kevin Scheer, spent part of the 36 hours allotted in the contest, creating the app, Pick Me Up.

“So one idea that I kind of proposed as a joke at the last hackathon I went to was essentially an app that reads and analyses your texts and if your texts become too sad in a certain period of time, the app will recognize this and get you an Uber to drive you to the nearest bar,” said Jasieniecki, senior in Engineering. “It was a pick me up.”

“— That picked you up,” McClellan added.

Jasieniecki said it was around 3 a.m. on Friday that he pitched the idea for Pick Me Up, which he described as “a pun and a dream.”

The idea wasn’t always the team’s plan though. At the beginning of the hackathon, the group worked on its first project; an app that would make legal documents easier to read.

They said they later decided against it after realizing it may be difficult to finish within the 36-hour time frame.

In order to make that dream possible, McClelland said 400,000 tweets were initially used to comprise a training dataset so the app could later decipher a person’s texts and determine whether or not that person was sad.

Scheer, sophomore in Engineering, said that during the 36 hours at the hackathon, those attending had the opportunity to visit company booths as well.

If one team’s project was utilizing the services offered by the company, Sheer said the company was more likely to help the group with code.

A portion of the team’s prize was a start-up tool kit for Pick Me Up, McClelland said. However, even though the original Pick Me Up project was designed as an app, he said the group will not likely continue it as one.

“What it will probably do is it will sit in the background of a lot of other apps as kind of an engine that does emotional analysis,” he said.

He compared the project to a car: the project would be the engine to the app, which is the car.

“The engine that we’re talking about creating is just an engine,” McClelland said. “It’s not a car. If you think about it, most consumers who buy cars don’t actually know the manufacturers of the engine specifically; they just know what kind of car they’re driving. So if a car company outsources their engine building to another company, we’re the company that builds the engine, not the one that builds the car.”

As of now, the group may integrate the project with Uber, which was the ridesharing service the original project used, along with other companies.

Jasieniecki said that not only did the winning team’s project depend on its “coolness factor,” but also its the ability to be utilized in businesses by being “productized and be sold.”

“Basically, the judge that announced first prize said that while our initial use-case was kind of silly, which I completely agree, they saw value in it,” Jasieniecki said. “That’s the project they saw the most potential in as far as being productized.”

Taylor can be reached at [email protected].