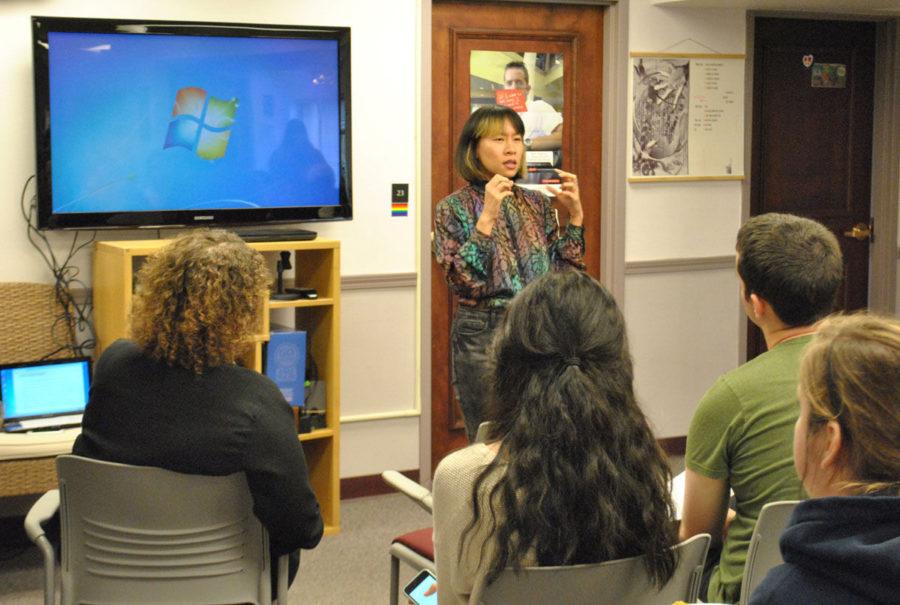 Speaker, Kelly Zen-Yie Tsai, describes the seminar to the students at Allen Hall on Monday.

Tsai was chosen as the University’s keynote speaker for October’s Domestic Violence Awareness Month because of her ability to “fuse together art and activism,” according to Rachel Storm, assistant director at the Women’s Resources Center.

“Art is a language that everyone can speak and everyone can hear,” she said. “We want students to come to these events and be able to cultivate a deeper understanding of what people are facing when they are experiencing domestic violence.”

Tsai began her series of events with a workshop on Monday afternoon, as part of the Women’s Resource Center weekly lunch lecture series.

The workshop, “Half-Full & Half-Empty: Spoken Word, Feminism, and the Fight to End Gender Violence,” aimed to delve into the community’s definition of feminism and the understanding of how language can both begin and end violence.

Students and community members at the event defined feminism as “lovely” and “accepting” but can often be perceived as “militant”; a movement often misunderstood as “one gender establishing superiority over the other”; but more importantly, a movement in “creating equality” among both genders.

The room was full of people nodding and snapping in agreement, resembling a small, intimate poetry slam.

To conclude the workshop, Tsai invited the group to engage in a five-minute free write to unleash “poetry, prose, random thoughts, colors and ideas” related to domestic violence and feminism.

“What I love about poetry is that you’re finding your logic around how you like to put words together,” she said. “As long as you’re following the thread of your own logic, it can really become something powerful.”

As participants went around the circle sharing their thoughts, there was a mix of emotions — ranging from loneliness and sadness to gratitude and inspiration.

Tsai encouraged the group to view life with the lens of “balance of opposing forces” and to leave “Half Full & Half Empty” seeing that domestic violence and injustices against feminism can be redeemed.

Tsai and her workshop helped Blake Banks, freshman in Engineering, to think more critically about the issue, Banks said.

“It was always in the back of my mind, and she brought it forth,” she said.

For Alex Papak, senior in Engineering and one of few male attendants, his pasion for women and gender issues was refueled, he said.

“Going to these kind of spaces and listening to women’s voices is crucial to advocate for gender equality,” he said. “A lot of times, the way people do things and the words they say can do damage and can disenfranchise the people they are speaking to or trying to speak for.”

Tsai continued her series of events on Monday night at Allen Hall/Unit One with a spoken word performance and will conclude with two workshops Tuesday.

“The beauty of spoken word and the tragedy of it is that it’s an oral culture,” Tsai said. “So a lot of the times, it’s not written down. So people who are important to me don’t get the recognition they deserve for being the brilliant people they were and are.”

The workshop will be at the Asian American Cultural Center from noon to 1 p.m. as part of the center’s weekly lunch lecture series.

The other workshop, “Everything I Learned About Love I Learned From Reality TV,” will be at Allen Hall/Unit One at 7 p.m. The aim of this workshop is to draw out lessons from reality TV on what not to do in love and relationships and how to make relationships more fulfilling through writing and art, according to the event’s website.

The common thread that ties all of these events together is poetry, which she said she has been using to engage others in conversation since high school.

Stephanie can be reached at skim108@dailyillini.com.