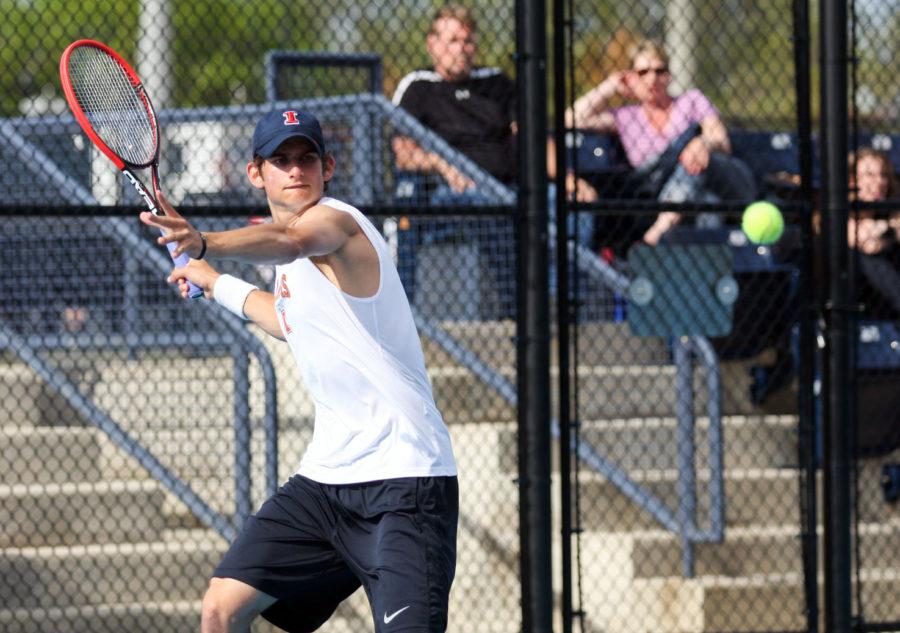 lllinois’ Jared Hiltzik prepares to return the ball during the first round of NCAA Tennis Regionals against Ball State University at Khan Outdoor Tennis Complex on May 9, 2014.

The Illinois men’s tennis team is back in action this week at the ITA Midwest Regional Championships in Ann Arbor, Mich. The winners of the tournament receive an automatic berth at November’s ITA Indoor Championships at the Billie Jean King Tennis Center, the home of the U.S. Open. After a weekend off, the Illini are rested and ready to go up against some familiar foes from around the Midwest.

Four of the main draw’s top 16 seeds are Illini, and they’ll face players from Notre Dame, Big Ten heavyweight Ohio State and in-state rival Northwestern. There will be players from several other Big Ten teams too.

Both Jared Hiltzik and Tim Kopinski will be playing in their first matches after the ITA All-American Championships two weeks ago. Last year, Hiltzik didn’t play in this tournament, as he automatically qualified for the ITA Indoor Championships with a quarterfinal appearance at All-Americans. Kopinski made it to the quarterfinals last year before falling to teammate Farris Gosea. Both will look to build on their performances two weeks ago, but their goals are clear.

“For Jared and Tim, their goals are no different than anybody else’s this weekend,” head coach Brad Dancer said. “We’re going there to compete, compete our tails off.”

Aleks Vukic’s last action came in All-American qualifying. Vukic lost a hard-fought match in the final round of qualifying to No. 62 Ralf Steinbach of Ohio State, who will also be at the Regional Championships.

“You’re playing with guys that are in our region that we’re going to see throughout the rest of the year,” Dancer said. “It’s one of the early chances we get to see some of the new players on the other teams.”

The familiar opponents will certainly be interested to see Vukic on court. The Australian freshman has put together an impressive early season, with strong showings in the Southern Intercollegiate Championships and the All-American qualifying draw. Vukic will be joined by two other Illinois freshmen in Ann Arbor. Aron Hiltzik is entered in the main draw while Toshiki Matsuya will have to go through qualifying. In his last outing at Alabama’s Four-in-the-Fall, Matsuya had a rough first match, but bounced back and played well in his final three matches.

“From Alabama, I think I’ve improved a lot, just executing my patterns better and redefining my purpose for every shot,” Matsuya said. “Executing a little better, a little bit deeper shot, a little bit more to the corner kind of thing, changing the direction of the ball better, things like that.”

Matsuya said that the break from competition allowed the team to train harder because they didn’t have to worry about resting for tournaments. After a couple weeks of tournament-free practice, Brian Page is ready to get back on the court and continue his recovery from a broken wrist and a stress reaction in his foot, injuries he suffered last season. In the interim between tournaments, Page said he is getting more of his game back and focusing on getting back into a competitive mindset.

“I’m hitting two-handers now and I can use my backhand, so that’s a big part of my game that’s starting to come back more and more every day,” Page said. “The main thing I’m going to be focusing on is the mental side of the game. Being aware and making good decisions in points and staying in the right mindset to compete.”

Christopher can be reached at [email protected].