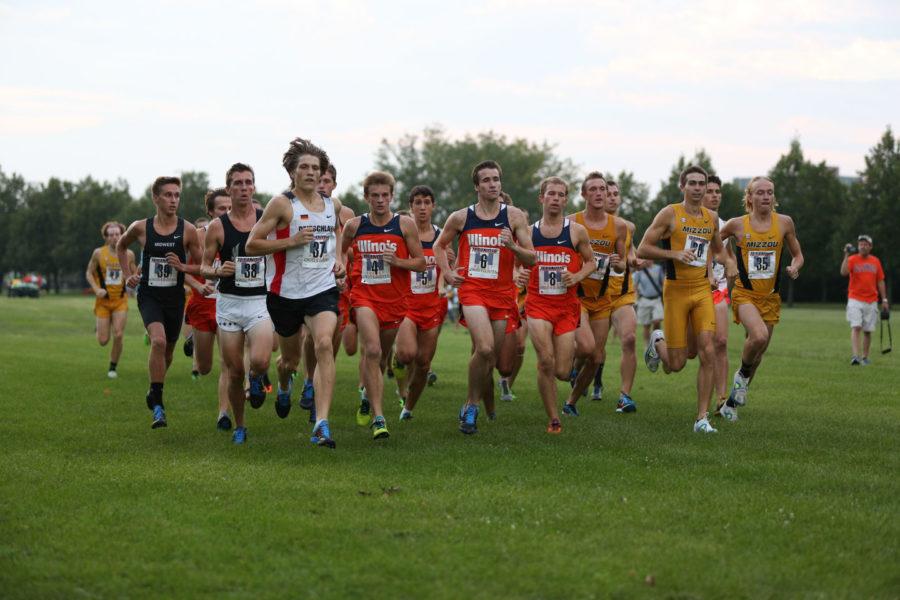 The Fighting Illini men’s track and cross country team start their race during the Illini Challenge at the UI Arboretum on Aug. 29.

With a two-week break from competition, the Illinois men’s cross-country team is set to race in the Wisconsin Adidas Invitational on Friday. This will be the Illini’s toughest meet so far, going up against 19 nationally ranked opponents in the 38-team field, including conference opponents No. 9 Wisconsin, No. 11 Michigan and No. 23 Indiana.

Facing an extremely competitive field, the Illini remain confident in their abilities to perform at a high level on Friday.

“We know we’re strong, we know we’re good, so now it’s a matter of showing it,” senior Jannis Toepfer said. “That doesn’t mean going out doing anything crazy; it means being consistent and doing what we’ve done all season.”

The group running for Illinois this Friday at Wisconsin will consist of juniors Ian Barnett, Paul Zeman and Liam Markham, and seniors Brendan McDonnell, Bryce Basting and Toepfer.

The Illini have had some recent success on the course, having competed there for the past two years. Last season, the team finished 19th in the Wisconsin Adidas Invitational. The team looks to build on that and improve its finish this year.

“I think we will perform better than last year,” Basting said. “We’ve been training like mad men. We’re walking into Wisconsin with a lot of confidence and a chip on our shoulder.”

Illinois has utilized its long break from race action and has concentrated solely on Friday’s meet. At practice, the team has worked on race-specific drills and cut down on the volume, while increasing the intensity.

The runners have felt that intensity and look to carry that into Friday’s meet.

“Intensity is pretty high,” Toepfer said. “We’ve been preparing ourselves to run hard to compete with these teams; it’s been the focus all along.”

On Friday, Illinois will also be sending a group to the Bradley ‘Pink’ Classic. Sophomores Will Brewster and Ryan Burgoon, and freshmen Garrett Lee, Alex Gold and Alex Notton will race for the Illini at Bradley.

Matt Gertsmeier can be reached at [email protected] and on Twitter @MattGertsmeier.