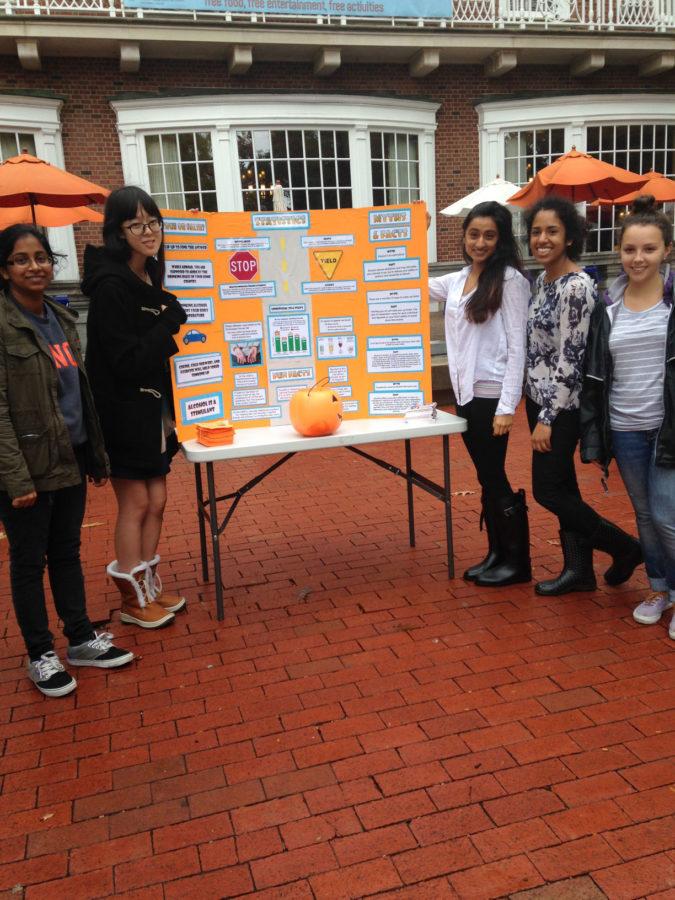 The Illini Union side of the Quad became littered with shards of glass and metal on Monday.

A “junked” four-door black car made an appearance to promote the issue of irresponsible drinking on college campuses.

Today, the McKinley Health Center will host its ninth annual event “Alcohol Awareness: Think Before You Drink.” The seminar will take place in the SDRP Multipurpose rooms ABC from 6 to 8 p.m.

Thursday’s event will have a panel discussion to educate students on alcohol and its effects.

When asked what she wants students to walk away with, said Lyssa Barth, event coordinator and graduate student in Social Work: “The education factor. We want students to ask themselves, ‘How do I drink in a way that will ensure I’m safe and my friends are safe?’?”

McKinley Health Center has hosted this event since 2006.

Last year, there were almost 400 students in attendance, according to Barth.

The Think Before You Drink event will consist of an expert panel informing students of what happens physically, mentally and socially when alcohol is consumed.

The panel will include representatives from the Alcohol and Other Drugs Office, Coroner’s Office, Student Legal Services, University Police Department, Champaign Fire Department and the Carle Foundation Hospital ER Department.

Student volunteers will also be there to support the panel and to assist students in experiments such as pouring shots of water, myth versus fact trivia and a body versus alcohol activity.

“Students are surprised when they realize they don’t actually know how big a shot is and that they’ve been pouring way more than they had to,” Barth said.

Through the Alcohol Awareness event, Barth said she hopes they can keep students educated and continue to have a fun and safe college experience.

The National Institute on Alcohol Abuse and Alcoholism suggests that the trend of college drinking is due to the circumstances of living situations — from residence halls and Greek housing occupied by different aged students to being around the corner from an 19-and-over bar, the temptation is fed through resources.

Based on 2012 statistics, approximately 40 percent of college students engage in binge drinking within the average month. The National Institute on Alcohol Abuse and Alcoholism defines binge drinking as having five or more drinks per occasion.

On Monday, the McKinley Health Center’s posing of a “junked car” on the Quad served as a means to promote alcohol awareness along with fun activities, which included trying on beer goggles and taking field sobriety tests.

Janki Thakkar, junior in LAS, is a committee member for the event and worked the table that accompanied the car.

“The reason we wanted to do this is because we’ve never had something tangible,” she said. “We hear about drunk driving all the time. Having a visual to show how deadly it can be really hits home.”

The car continued to attract many passers-by who stopped to stare, pulled out their phones and captured the damages.

“I think every school, no matter what, is going to have some sort of alcohol problem,” Barth said. “Us being a Big Ten school, there is more pressure for students to drink.”

The staff said they understand there is a culture of alcohol on campus, and therefore they are not telling students to quit drinking but instead, “think before you drink.”

Rachel can be reached at [email protected].