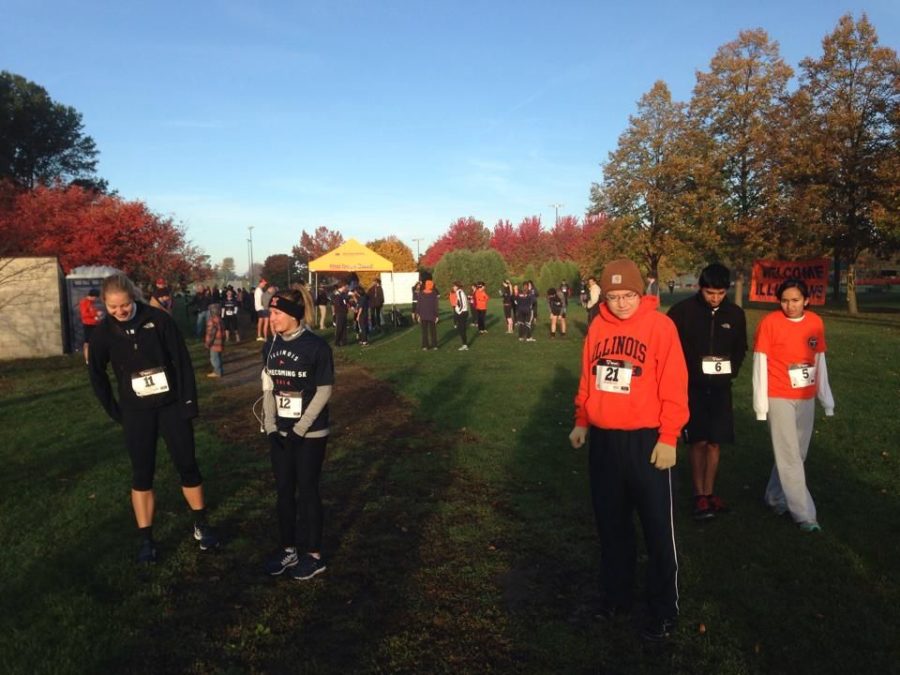 The Homecoming 5k returns after nearly a decade on Sunday, Oct. 19, 2014 at the Arboretum.

The reason that Joel Sarmiento runs is not only to stay in shape or to be healthy. It’s to keep a peaceful, calm mindset.

“You get into this state of mind where everything’s clear, and you’re not thinking about anything — you’re just running,” said Sarmiento, junior in Engineering. “It’s just you and the road … it’s very tranquil and peaceful.”

Sarmiento said his family came to town for the race, and he ran with his two brothers. He said the race was “ a good way to spend time with them and just encourage them to be active.”

Students, alumni and community members also participated in the Homecoming 5K race on Sunday at 8 a.m., which took place at the University Arboretum. Proceeds from the event went toward the University Emergency Dean Fund.

The runners made two laps around a preset course at the Arboretum.

Erica Smith, vice president of Student Alumni Ambassadors’ Homecoming committee and senior in Business, said she thought of the idea to add a 5K race to this year’s list of Homecoming festivities to help kick off the week.

The Homecoming 5K dates back at least to 1998, Smith said, but there has been a hiatus until this year when Smith decided to re-introduce it.

“I wanted an event that would promote Illini spirit, get people active, promote health and well-being and give a chance for the community, alumni and students to all come together and just work toward one common goal — to give back to the community,” she said.

The event was hosted collectively by the SAA, the Illini Union Board and Greeks Support Homecoming. Smith and other members of the three organizations have been preparing and planning the event since this past May. They collaborated to decide where and when the race would take place, and what organization would receive the funding.

Each runner paid a $20 race fee to participate.

“The Emergency Dean Fund is a great fund that most people might not know about,” Smith said.

The fund supports cases such as helping students affected by apartment fires, aiding students who do not have sufficient winter clothing or funding students’ plane fares to visit family in the event of a family emergency, she said.

Jori Parys, junior in LAS and a member of the cheerleading team, said she had been looking forward to participating in the Homecoming 5k this year.

“One of my cheerleading friends … introduced the idea to me, and I’ve never myself ran in any type of a race, and I’ve always kind of wanted to,” she said. “So I just thought it’s a really good experience, and a fun thing to do with a friend.”

Parys said that she has been running recreationally since she was in middle school. She has been to several other 5K races for charitable purposes, but both her and Sarmiento said they were excited in particular about taking part in this run.

“It helps keep me fit, and it can be very goal-orientated, so you incorporate discipline in it, so like it’s easy to keep track of,” Sarmiento said. “It’s just an easy way, a good way, to stay fit and understand where you’re goals are at an how to beat them.”

Prizes were awarded to the top race finishers, the most spirited and the RSO with the largest number of participants.

Sarmiento said he is glad that the Homecoming 5k was brought back this year as an addition to the existing Homecoming events.

“I think it’s a good way, definitely, to incorporate alumni and other people into Homecoming,” he said. “So if you’re an alum, it’s a very tangible thing you can do.”