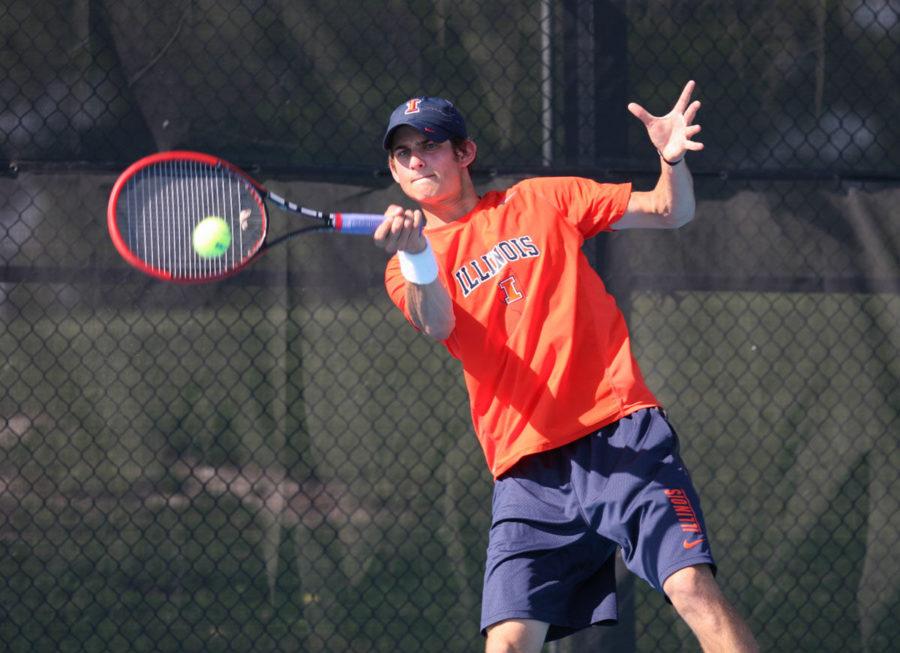 Illinois’ Jared Hiltzik hits the ball back during the second round of NCAA Tennis Regionals against the University of Memphis at Khan Outdoor Tennis Complex on May 10.

The Hiltzik brothers of the Illinois men’s tennis team both had impressive runs at this week’s ITA Midwest Regional Championship in Ann Arbor, Michigan. Junior Jared made it to the tournament finals and freshman Aron made it to the semifinals, his best showing as an Illini. With a trip to Indoor Nationals on the line, six Illini competed and the team compiled a 10-6 record in the singles main draw against familiar foes from across the Midwest.

Jared had a disappointing second-round exit at ITA All-Americans two weeks ago. In his first tournament back, Jared defeated several competitors from frequent Illini foes Ohio State and Notre Dame. At All-Americans, head coach Brad Dancer said Jared needed to get experience in tough, grind-it-out matches. Jared got that experience in Ann Arbor.

“Beginning right away in the second round when he lost the first set, so he was being challenged immediately there,” Dancer said. “Every single match kind of from there on out was a tough, tough battle.”

Jared lost a hard-fought tournament final 4-6, 6-3, 4-6 to Ohio State’s Mikael Torpegaard, a Danish freshman. It was Torpegaard’s second consecutive win over a Hiltizk. He defeated Aron 6-4, 3-6, 6-4 in the semifinals.

Aron was tennisrecruiting.net’s No. 1-rated recruit coming out of high school, and posted a 4-1 record on the weekend, including a win over the tourney’s No. 2 seed, Chris Diaz of Ohio State.

“He hadn’t had the best few weeks of practice coming up but he came out for this tournament and he was fired up and ready to go,” Dancer said. “He was locked in and dialed in, so I was really pleased with that.”

Before the tournament, Dancer said it was a good time to see the new players that familiar regional foes bring in. While opponents got a glimpse of Hiltzik and fellow freshmen Aleks Vukic and Toshiki Matsuya, the Buckeyes’ Torpegaard turned some heads. Ohio State is Illinois’ toughest Big Ten rival, the Buckeyes handed the Illini their only regular season Big Ten loss last year and also defeated Illinois in the Big Ten Tournament finals. This was Illinois’ first real chance to match up against Ohio State, and the Illini posted a 3-2 record against the Buckeyes. Collectively, the Illini finished with a 5-4 record against Big Ten competition.

The other Illini competing at Michigan all suffered early exits. Tim Kopinski, the draw’s No. 3 seed, lost in the second round to Gijs Landers of Michigan State. Brian Page lost to Notre Dame’s Josh Hagar. Freshmen Vukic and Matsuya both fell in the opening round as well. Prior to this weekend, Matsuya had made it through the pre-tournament qualifying, rattled off three consecutive victories without dropping a set.