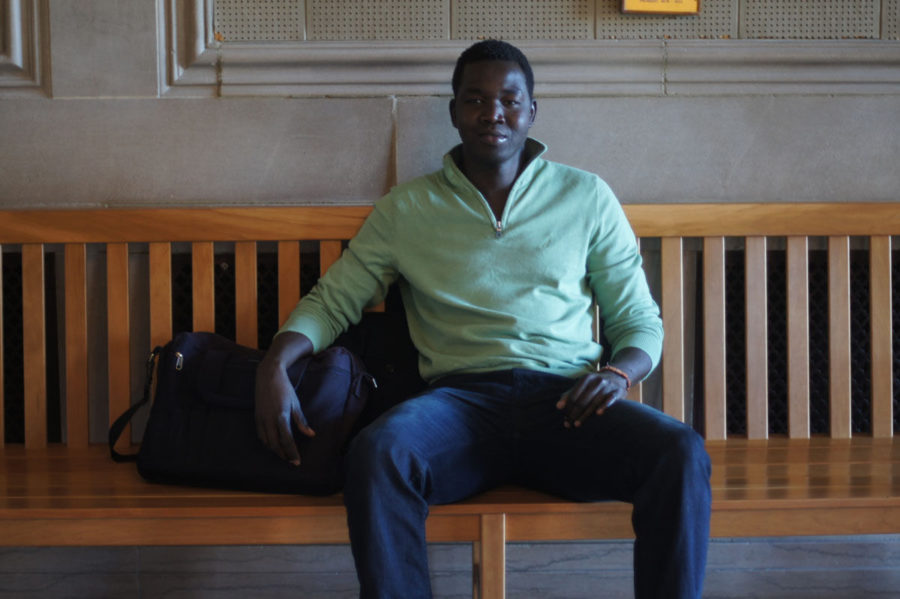 Gai Nyok, graduate student in economics, remembers waking up one morning at 5 years old in the tiny village of Abang, of the former Sudan, with the sun still down and being grabbed by the hand by his older brother.

“Ket,” his older brother exhaled. In their native Dinka language, it meant “run.”

Barefoot and naked, Gai, his brother, Abraham, and their cousin, Deng, ran until they could not hear any more gunshots or tanks.

Sudan as a nation has suffered through decades of civil wars between the north and the south. The second civil war, which ran from 1983 to 2005, destroyed the southern village of Abang, where Gai spent his early childhood. Gai said he and his family were part of the Dinka ethnic group, widely targeted in the region during this time as the government saw them as a support base of the rebel movement.

“There was war in nearby areas, so you knew automatically what was happening. The war had come to your village,” he said.

He said he remembers hearing rockets, bombarding what he once knew as his home.

In the hysteria of the moment, his parents and two sisters ran in a separate direction. Gai would not see any of them again until 2001, 10 years after first fleeing from home.

For Gai, the life he knew as a child would be no more, beginning with a 500 kilometer trek to the Ethiopian refugee camp. While the details of the trek remain fuzzy to him, one thing he said is certain — he remembers being afraid.

He recalls being warned about wild animals that were scavenging just as he and the other refugees had been forced to do, picking cherries along the way and hunting whatever game they could. The possibility of running into an ambush always existed as well.

That is how Gai became one of the Lost Boys of Sudan — some 20,000 boys and girls orphaned or displaced by the second civil war — who wandered the African plains in search of refuge. Gai would be a part of the last wave of Lost Boys.

After two weeks, Gai said they found their way to the UN refugee camp in Ethiopia, which housed 40,000 refugees. Gai lived at the camp for a year with his brother and other relatives before calls of a new war started to ring. After the collapse of the Soviet Union in 1991, war broke out once again and Gai was forced to flee once more.

This time though, the Gilo River obstructed the passage back to freedom for Gai. Thousands died in the crossing of the river, either swept up by the current or eaten by crocodiles, but Gai was cradled in his cousin’s arms and survived.

Gai arrived in Kenya’s Kakuma refugee camp with his brother in 1992, and a nine-year waiting game ensued.

“Every two weeks or so they would bring the food and you’d wait another two weeks for another full ration,” Gai said. “It went on like this for the whole time, for nine years.”

Often rationed approximately 3 kilograms of wheat flour, a cupful of lentils or beans, and a tomato paste-sized can of oil, Gai said the ration typically lasted them about 11 days.

For the nine years spent in the camp, Abraham took on the responsibility of watching over Gai.

“I was scared because I was a little young too, and the responsibility was on me to look after him the whole time,” he said. “I didn’t know if he was going to make it.”

Gai said he remembers the heartbreak of his fellow refugees when their names didn’t appear on the list; however, in 2001, Gai’s “God-sent” opportunity at freedom came. After a long interview process, he was selected to fly to the U.S. in September of that year. Abraham had also been selected for the program and flew out in June 2001.

“It was just a great feeling. It was a feeling of euphoria that you were finally going to leave this refugee camp, that you had been here for nine years and life was now changing,” Gai said.

He flew into New York City on Sept. 22, 2001, and was then flown out to Richmond, Virgina, where he would live with a foster family for his high school career.

Abraham, who had left the camp in June, received aid from the program for three months. He and the rest of the Lost Boys who were over 18 were given three months to make a living and work toward the “American dream.”

Abraham currently lives in Nashville and has held many jobs since arriving in the U.S. Gai said his brother’s story has been a little different from the life he has lead since arriving 13 years ago.

“Some of them did not have the stability that I had living with an American family. All I had to worry about was going to school and doing well. But them, they had to go to school, take some GED classes, learn the language and some of them were also providing for their families back home,” Gai said. “I know a lot of people have fallen through the cracks. It’s not easy making the American dream in the twenty-first century.”

“It motivates me, and it gives me a sense of purpose that I have gone through a lot already. This is only a small hurdle, I should not let it stop me,” he said.

Even though he found a steady level of success, Gai said he was lucky because there are other Lost Boys who are “just as dedicated.”

Regardless, Abraham said he is “very, very proud” of Gai and the success he has found in the U.S.

For Gai and his brother, the U.S. has become home now while his mother and sister remain displaced in Kampala, Uganda.

Gai is supported by his economics professor and advisor Ali Toossi Ardakani to “achieve great things,” Toossi wrote in an email. Gai is set to graduate in May and as soon as he does, he plans on making the trip to Uganda to visit his re-settled family, including his older sister.

The waiting game will be over soon.

Eliseo can be reached at [email protected].