Once an Illini, Always an Illini 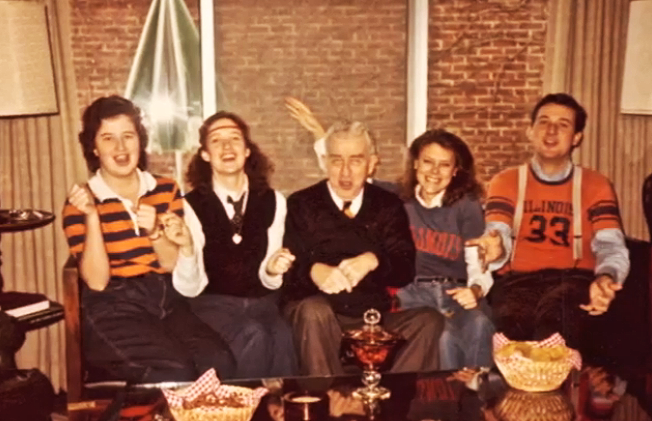 Rich McMenamin (’78) shows his school spirit with friends at the University.

Besides being a prestigious institution with a prominent social scene, the University provides students with something even greater – the resources they need to continue learning even after they graduate.

In honor of Homecoming Week, The Daily Illini spoke with Richard McMenamin, a graduate from the Class of ’78, about his Illini pride. Although he is unable to attend Homecoming this year, McMenamin said he continues to be thankful for his Illinois education by keeping updated on campus news, sending his children to the University and reflecting on what he learned at the University 36 years ago.

The Daily Illini: What were you involved in as a student here?

Richard McMenamin: I was a history major, and I was involved in Volunteer Illini projects (an RSO on campus).

DI: What was the most memorable volunteer event you participated in?

RM: There was one (project) where we were corresponding with prison inmates, and that was memorable. It wasn’t always easy, and it was actually pretty intense. I was also really involved with campus protesting because it was the winding down of the Vietnam War. Lots of presidential candidates came to the Illini Union to speak, and that drew attention. When Jimmy Carter was running for president, he came to campus. People were really into that and curious about what he had to say, so that was pretty cool.

DI: What traditions have you understood to be continuously upheld since you were a student?

RM: We were just huge fans of the Chief, so there was a lot of celebrating him as an iconic figure. It’s sad that the tradition is gone. That’s the biggest one I can think of. We weren’t as in touch with some of the traditions because of the era and the war, but for example, the Red Grange (one of the greatest college football players who played at the University) was a big deal.

DI: What was your favorite part about Homecoming?

RM: We had a couple Homecoming parties, but all the celebrations were toned down back then. They weren’t as emphasized.

DI: What are, or were, your Homecoming traditions?

RM: The biggest tradition was Block I, and it seems like there was a higher level of student participation back then. It was a bigger thing. We had two Block I’s, and one was on the east side and one on the west side. It was a little more raucous with the “I-L-L” “I-N-I” call and response. We also brought some young adult beverages into the stadium, and that was fun. It wasn’t even sly. We just used to bring in big, big coolers of “combat juice.”

DI: What is your favorite part about Homecoming?

RM: My traditions recently have been to pay homage to Red Grange, and I like walking out with the band. I believe last time we ended up at either the English building or the education building, and we did some fun activities with them. It shows a lot of spirit and refreshes your memory about campus aspects.

DI: Besides attending a prestigious, nationally acclaimed university, what do you believe makes being an Illini special?

RM: It’s got a great tradition of being a land-grant university, with our roots going back to the 1860s. We were a school that came out of a tradition believing higher education should go to every person, common man and woman especially. It’s a cool tradition because you don’t have to be an elite, but you can be a common person and be at a nationally prominent university with the highest standards and programs. It’s impressive.

DI: What, in your life, do you contribute to Illinois? What do you have to thank this University for?

RM: What I feel really thankful for is that it was the place that I learned to learn, and as a result, I think the University of Illinois is helping me still to learn. I’m still enrolled, and I still connect myself emotionally and strive to be in the best and most practical academic circles. One of the former presidents of the University talked about how this school is one of the greatest assets in the state, and I believe that. It really makes an impact, and it changes you.

Rachel can be reached at [email protected]