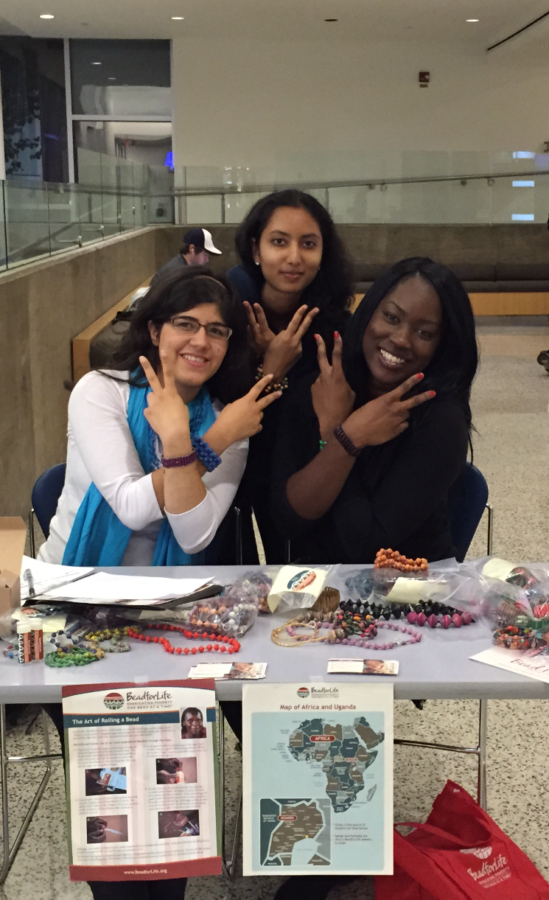 In Uganda, nearly 25 percent of people are living below the poverty line. These impoverished conditions increase the likelihood of human trafficking, which can lead to lifelong trauma and the inability for the child to reach their full potential.

In September, the University’s UNICEF organization began selling jewelry through BeadforLife, which provides a steady source of income for Ugandan women.

This is the first time UNICEF UIUC has worked with the organization.

“Our theme for September was trafficking and we thought this blended in well,” said Astha Saxena, fundraising chair and sophomore in ACES. “We feel that really fit in well with the theme of helping women support themselves in cases where they can become more vulnerable to trafficking.”

According to the BeadforLife website, participating Ugandan women roll beads for 18 months and typically multiply their income by 7 to 10 times through the program, allowing them to improve their living situation and learn how to run a business. Establishing businesses allows the economy in the area to flourish and helps the women maintain their lifestyle.

The group had a sale last week at PAR, and is also selling through an online order form on its Facebook page, according to Ana Cheung, the organization’s president and junior in Engineering. The next sale will be in PAR on Tuesday from 6 p.m. to 10 p.m.

The group is selling 12 pieces of jewelry, including necklaces and bracelets, which range in price from $6 to $26. One of the pieces is the donation bracelet.

It sells for $25, but “it’s created at very little cost. Most of the money goes towards a larger donation,” Saxena said.

Some people have been off-put by the price of the jewelry, according to Saxena.

“These are a little pricey, but it’s because it’s fair trade and we want to make sure that all the proceeds help women fairly according to how much they deserve for making these,” she said.

A retailer that is very familiar with fair trade is Ten Thousand Villages in Champaign. The retailer offers products from 130 artisan groups in 38 countries, according to its website.

The sales floor is also run by 40 to 50 volunteers, according to Assistant Store Manager Carrie Nelson.

“It helps us keep our costs very low, because as a non-profit, our main focus is on the artisans and making sure that their lives can be supported and that they have a dignified workplace,” she said. “The small profits that we’re making basically just go to keep the lights on.”

For Nelson, her interest in fair trade rests in the pieces’ history.

“I love the story behind things. I love the fact that I can pick something up and know that it was created by one person for me,” she said. “There’s nothing that is so mass-produced; you can find something unique in every product, it’s like a total experience.”

The store, a Champaign fixture for 29 years, will be having a “bag sale” on Nov. 8. Anything that can fit in a shopping bag is 20 percent off. For those who would prefer to shop on campus, Ten Thousand Villages will be at the University YMCA Dec. 2 through 4.

“Fair trade is about fairness and empowerment and dignity, and that’s something that everyone deserves, so if I can put my shopping dollars toward that then that’s something I want to support,” Nelson said.

The UNICEF UIUC group thinks its fundraiser has been successful so far, according to Cheung. They are selling until around Nov. 7, but they have already raised about $200, based on Saxena’s estimate.

This is the first project organized by its fundraising committee, which was established this year.

“It definitely supported UNICEF’s local campus initiative and made us a bigger organization,” Cheung said. “People will know more about what we do.”

Though September, and the organization’s human trafficking theme, may be over, the difference they are making in the lives of Ugandan women continues.

“It just increased their opportunities tremendously,” Saxena said. “This really made an impact so we’re really proud to be doing this.”