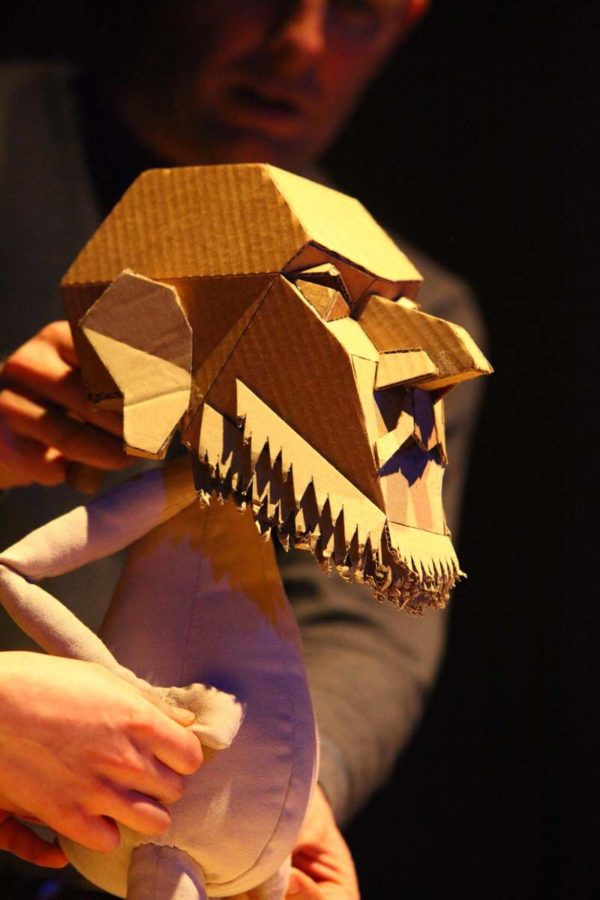 Blind Summit Theatre will perform “The Table,” starring a cantankerous puppet, on Wednesday through Friday at the Krannert Center for the Performing Arts.

Blind Summit Theatre, whose colossal 60-foot tall Voldemort puppet performed at the 2012 London Olympics, has returned to the United States from England with a tour that includes one 2-foot tall, three-man-operated puppet and a table as the prop.

Inspired by both British playwrights and world religion, “The Table” stars a cantankerous puppet that intends to tell the story of Moses through his own performance. But as he performs his version of the story, he becomes distracted with his life questions and drifts off into his own humorous, existential crisis, while the puppeteers who control him improvise and interact with both him and the audience.

As part of its U.S. tour and its first-ever performance at the University, the British group, Blind Summit Theatre, will perform “The Table” on Wednesday through Friday at 7:30 p.m. as well as Saturday at both 3 p.m. and 7:30 p.m. at the Krannert Center for the Performing Arts. Tickets for the shows range from $10 to $38, and can be purchased over the phone or at Krannert’s ticket office.

“One of the inspirations for the show was to do a full show with just one puppet, where one puppet does the whole show like a stand up comedian would,” said Mark Down, cofounder of Blind Summit and artistic director for “The Table.”

Moses, the cardboard-headed star puppet of the production, is a cranky, argumentative old man puppet, who spends the entire hour-and-10-minute runtime of the show, performing on one single table.

Down said he believes that much of the show’s ability to be relatable and improvisational stems from the scenery of the show — the single table. This allows the puppet to talk and joke with the audience as if there is no stage separating them.

While Down voices the puppet, he is joined by Sean Garratt and Laura Caldow in operating the puppet’s movements. These three puppeteers are the only cast members on stage for the entire duration of the show. The puppet is split into three portions with one puppeteer controlling the head, one operating the hands, and one maneuvering the feet. The show is performed in a form of traditional Japanese puppet theatre — Bunraku — which leaves the three puppeteers completely visible to the audience.

Blind Summit’s puppeteers use dry, sarcastic and sometimes very adult humor as well as snappy improvisation to bring the character of Moses to life, Down said. Both Moses and the puppeteers break the third wall by interacting and joking with each other during the performance, making Moses seem more like an actor than a man-operated puppet. This is, in Down’s opinion, what makes “The Table” so unique.

“Our work is very character driven and character-improvisation based. It’s aimed at adult audiences whereas a lot of puppetry is aimed at children. We’re very interested in telling puppet-driven stories, and my ambition is for a puppet to perform as well as a great actor does, for a puppet to really be a star of the show,” Down said. “Our work is very known for being quite funny, and we tend to try and explore the relationship between the puppet and the puppeteer.”

Scott Salvatierra, sophomore in DGS, expressed enthusiasm for the unique delivery that the combination of puppetry and British humor will bring to the stage.

“I’m a huge fan of British comedy and the dry humor that comes with it,” he said. “I’m excited to see how the puppet plays in delivering that kind of comedic style, especially since it doesn’t have other puppets to interact with and feed off of.”

Down said he simply hopes audiences appreciate the puppetry and enjoy the performance.

“I hope first of all they have a really good time, and they laugh, and they think and they’re moved,” he said. “I hope people are touched by it. I hope that they open their eyes to the possibility of puppetry.”

Elizabeth can be reached at [email protected].