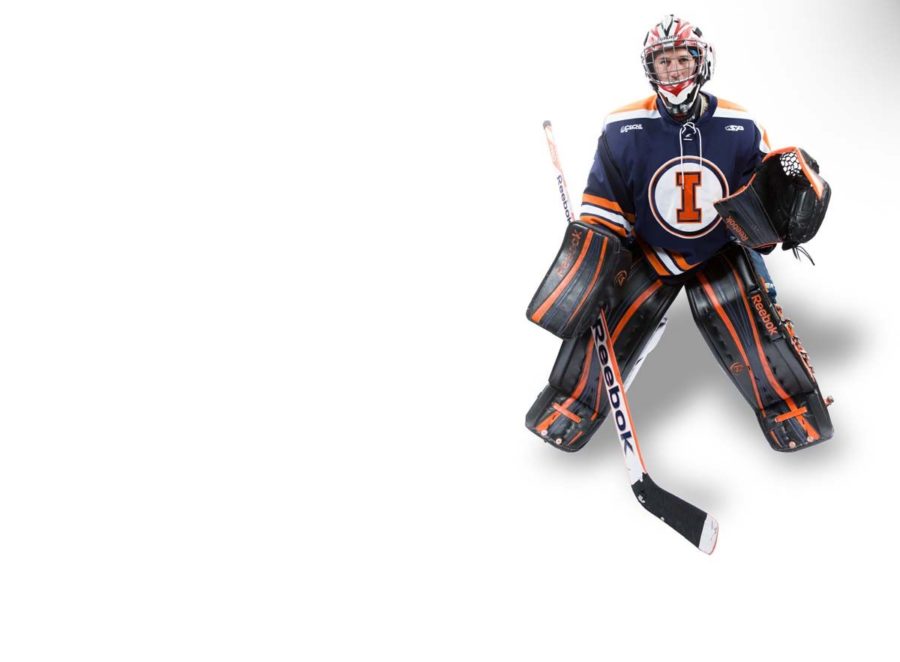 Illini goalie enables a win for the team, preventing 26 attempted goals by Michigan-Dearborn.

Goalie Joe Olen needed his teammates to bail him out.

Midway through the third period, the Illinois hockey team found itself down by two goals against Michigan-Dearborn at the Illinois Ice Arena.

Then with less than four minutes to go in the game, the Illini clawed their way back. Defenseman Austin Zima found the back of the net to bring the team within one. With just over a minute left, center Josh Belmont tied the game up at 4-4 to send it into overtime.

Olen got his opportunity to repay his teammates. Illinois scored the first goal of the shootout, and that was all it needed.

In front of a packed house at the Big Pond, Olen stepped up his game and made all three shootout saves to complete the comeback. The pressure didn’t get to him. He had been there before and knew what it took to pull through.

“Shootouts are almost a different game,” Olen said. “You are kind of focusing on little details. It’s all about timing.”

Timing wasn’t in Olen’s favor in the second period as Michigan-Dearborn found the back of the net twice in a span of six seconds.

Head coach Nick Fabbrini stayed the course with Olen. The score wasn’t telling the whole story of how his goalie was playing.

The first of the two quick goals came as a result of a defensive breakdown, which allowed Michigan-Dearborn’s Eric Rosteck to get past the defenders. Six seconds later, a shot hit off a teammate’s stick to knock in a goal for the Wolverines to give them a 3-2 lead.

“The puck changed direction on him,” Fabbrini said. “It’s tough, especially given the timing of it. He bailed us out with some huge saves early in the game, and then again later in the game. Our guys know he is going to give us a chance to win every game.”

For Olen, a short memory and the support of his defense was the key for him to recover and help the team in overtime.

As much as Olen relies on his defense for support in tough situations, the defensemen find comfort in having a leader to back them up in the goal when they are facing a deficit.

Despite the strong finish, Olen wasn’t satisfied with his play.

He believed that the game shouldn’t have been as close as it was, and he proved it the following night.

Illinois’ scoring came alive in the game Saturday, and the defense was a big part of it. With the Illini leading 3-0, Michigan-Dearborn scored its first goal midway through the second period.

Olen dropped his head as the horn signaled a goal. He knew he shouldn’t have let the goal through.

He didn’t make that mistake again, and that one goal became the only blemish in an otherwise perfect game, which he finished with 26 saves.

“It was pretty much the same game as the night before,” Olen said. “I just thought I had a little bit more confidence. I was more comfortable in the net than the game before.”

Olen has recorded a victory in all of his outings in goal thus far, and the Illini are cruising toward conference play with an 8-1-0 record.

Fabbrini attributes Olen’s success to his size, athleticism and anticipation in the goal. He poses a challenge for any opponent with his play on the ice and leadership off it.

“He is quietly one of the most competitive guys on the team,” Fabbrini said. “He hates giving up goals, whether it’s in a game or in practice. That’s what we expect out of him. We expect him to keep battling out there. These guys feed off that.”