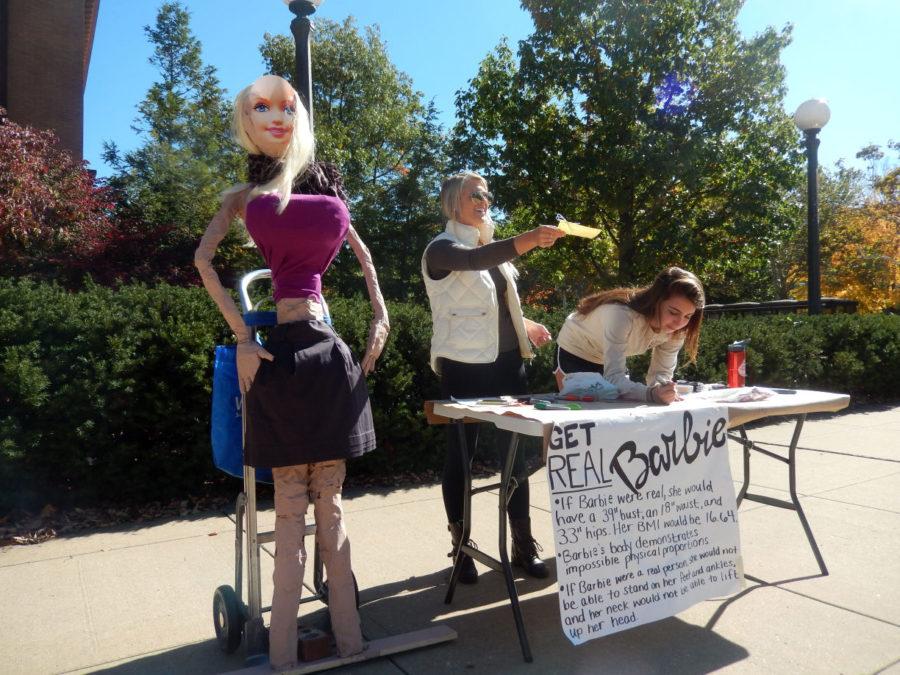 Students Georgia Christus and Chloe Peterson work next to a human-size Barbie on the Engineering Quad on Monday.

Barbie has left her Dreamhouse for the Quad.

On Monday, the booth was worked by Georgia Christus, sophomore in Education, and Chloe Peterson, sophomore in LAS. Both girls are members of Kappa Alpha Theta and said they became involved with Fat Talk Free Week through the sorority. Peterson said members of Sigma Delta Tau, Delta Gamma and Delta Delta Delta will also participate in working the booth throughout the week.

The booth features a life-size Barbie made by the Counseling Center. The dimensions include a 39-inch bust, 18-inch waist and 33-inch wide hips. The figure is propped up on a metal frame because a woman with those dimensions would not be able to hold up her own head or even stand on her feet.

“Barbie is extremely unrealistic, and this demonstration here shows that this is not how any person looks,” Peterson said, “Why are we trying to achieve this?”

Students who visit the booth are encouraged to sign a pledge promising to eliminate “Fat Talk,” or negative comments about their bodies, from daily conversation.

“I think girls honestly are just too hard on themselves,” Christus said.

She said that most negative body talk comes from within, not from another person calling someone fat.

Peterson said that there are ways to discourage negative self-talk in others. This can be as simple as reassuring someone that they look good.

“I would say, as cliche as it sounds, love your body. As long as you’re living a healthy lifestyle, eating right and feeling good about yourself, stop worrying about what’s on the scale,” Christus said.

There are many factors that contribute to insecurities over body image.

“Our generation is so obsessed with the media and everything social, so we are very influenced by if we see something on TV or on Instagram, Twitter, Facebook, even the news, we totally let that overtake us. It becomes our main concern,” Christus said.

Peterson said it is discouraging for girls who try to work out and eat healthy too because they cannot achieve the standard set by society. The media’s fixation on weight gain can cause people to worry they will be the subject of vicious rumors, too, Peterson said.

“Be confident in your own skin, eliminate unrealistic things that you want to achieve about your body,” Peterson said.

Laurie Seimetz, junior in LAS, is a Counseling Center paraprofessional who works on the Eating Disorders and Disturbances Treatment Team and was integral in putting the booth together.

According to Seimetz, there is a beauty standard for males as well as females, but males may feel that they will be stigmatized if they admit they have body image issues.

“In our Western culture, it’s mostly that you have to be big and strong, and that’s equated with masculinity. I think that can be really rough,” she said. “Both men and women come in all shapes and sizes. It doesn’t determine their self-worth.”

The booth also serves to raise awareness of the programs available to students through the Counseling Center if they feel they or a friend may have an eating problem.

“Students can go to the Counseling Center and get a consultation for any types of issues they are having, and after the initial assessment, keep seeing a counselor if they want to,” she said.

There are also workshops offered to discuss things like eating disorders, media images and body image and self-worth.

Xuanyan Ouyang, senior in Media, heard about the event through her Gender and Women’s Studies course, which also looks at body image. She stopped by the booth while it was on the Main Quad on Tuesday.

“I think this event is meaningful because it asks us not to view our body physically. Look beyond the mirror and explore more about yourself,” she said.

For Seimetz, the booth serves as a reminder that people are much more than appearances.

“We need to look at ourselves holistically, with all the qualities that we have. We are our bodies, but we are also so much more than that.”

Isabella can be reached at [email protected].