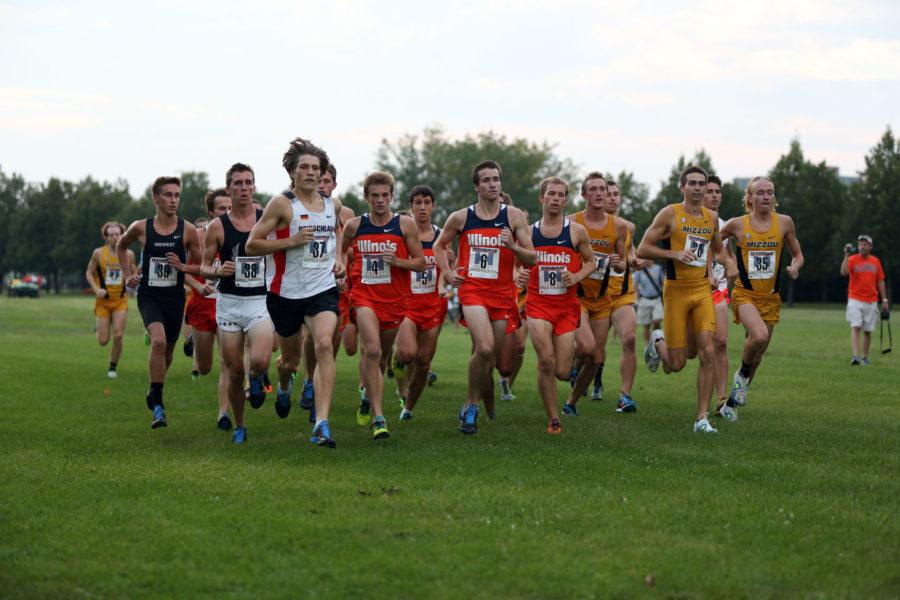 The Fighting Illini mean’s track and cross country team start their race during the Illini Challenge at the UI Arboretum on Aug. 29, 2014. The women’s cross country placed second with a combined total of 31 points.

For most of the Illinois men’s cross-country team, the Illini Open means a chance to run in front of friends and family. However, for junior Liam Markham, his family will be just as far away as they are when Illinois races in Minnesota.

Friday’s Illini Open will be the final meet of the regular season and second home meet of the year for the Illini.

Markham’s family resides in Clare, Ireland, a county on the west coast, 3,674 miles away from the University of Illinois. After a successful senior season at St. Flannans (high school), Markham was recruited by Illinois. In his three seasons running for the Illini, his parents have yet to attend one of his meets.

The beginning of Markham’s season was uncertain. Battling a stress fracture in his shin that he suffered during last year’s track season, Markham grooved his way slowly back into the cross-country season. Racing this Friday at the Illini Open, Markham has a chance to go up against seven other teams, including conference opponents Northwestern and Purdue. Friday is the last meet before Markham and Illinois will head to the Big Ten Championships in Iowa City, Iowa.

“My season has been a bit different from the others coming back from an injury, so I’m still trying to find that race sharpness and get that racing mentality,” Markham said.

The other runners Head coach Jake Stewart has chosen for Friday include freshmen Alex Gold and Alex Notton and sophomore Ryan Burgoon. For these three underclassmen, Friday will be their final chance to race this season.

Stewart hopes that the younger guys, who will not be racing at conference and don’t have as many opportunities to race as the other runners on the team, take advantage of Friday’s meet.

“Every race we have and every time we put a uniform on, we need to feel like it’s an opportunity for us to get better,” Stewart said. “If we continue to do that, then we’re going to get to a point where it’s just second nature for us to be ready to race.”

Gold, who has ran in five meets for the Illini this season, sees Friday as his chance to end the season on a high note.

“I want to finish knowing that I gave it everything I had and there wasn’t anywhere in the race where I could have pushed more or covered a move more,” Gold said. “I want to make sure I competed well.”

Gold also wants to take advantage of the season finale to run alongside Markham for the last time this year.

“He has a lot of running experience, so he is kind of a leader on the team,” Gold said. “Everyone learns from running with a guy like that.”

According to Stewart, the strategy for Markham this Friday will be to come out aggressive in the first 3,000 meters and deal with oxygen fatigue the remainder of the race.

“Me personally, I want to be as aggressive and as confident as possible,” Markham said. “I want to get that last confidence booster and race preparedness before Big Tens next Sunday.”