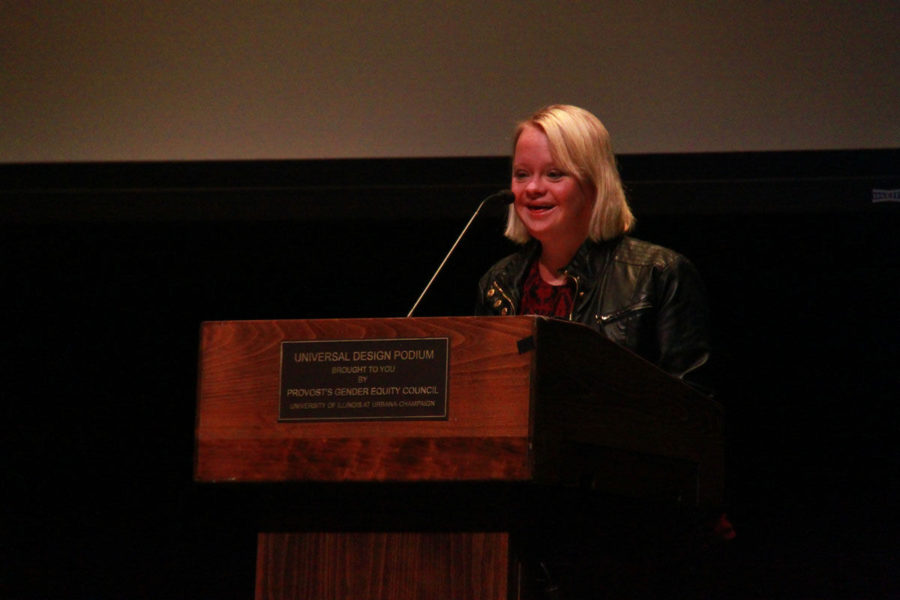 Lauren Potter, actress on the television show “Glee,” speaks about dealing with intellectual disabilities to students at Lincoln Hall Theater on Sunday.

She strode across the stage sporting a black leather jacket, a red blouse and jeans, wasting no time in announcing how lucky she is to be living her dream of being an actress.

“Glee” star Lauren Potter visited the University’s Lincoln Hall Theatre on Sunday at 7 p.m. to talk about overcoming obstacles and achieving one’s dreams no matter what stands in the way.

“A very long time ago when I was three years old, I dreamed of being on stage and being an actress,” Potter said. “There were some people that told me I would never be able to do it, so I only paid attention to those who told me I could.”

She was dancing before she could even walk, “and let me tell you, the walking thing took a while,” she said.

Potter didn’t walk until her second birthday, but her parents would play music as she “rocked out” while hanging onto her playpen.

After hearing the audience laugh and clap at her first dance recital, Potter knew being an actress was what she wanted. She received her first standing ovation and continued “dreaming big.”

At 16, Potter auditioned for a role on “Mr. Blue Sky” and got the part. She loved being on set, being with actors and being in front of the camera.

“I learned so much about acting and about being part of a team,” she said. “I also learned that being an actor isn’t just fun and games – it is very hard work.”

One day, a friend of hers who worked in Hollywood called and told her that she heard of a role on a new show called “Glee.” Potter always wanted to be a cheerleader, even after she tried out for her high school’s team and didn’t make it, so she knew this audition was for her.

The casting director wanted someone cute, witty and a little bit spunky, she said. Potter had to jump rope in the audition while the casting director yelled lines like, “Jump faster, Becky! Jump harder!” to imitate how the cheer coach, Sue Sylvester, played by Jane Lynch, would act.

“I had to work really hard and do a good job because there were 13 other girls trying out for the same part,” Potter said.

Potter was ecstatic when she heard she got the role and said she is still “having a blast” as “Glee” rolls into its sixth season. One of her fondest episodes is when Puck, played by Mark Salling, had to strip down to his underwear in “Prom-asaurus” in season three after Becky suggests playing strip poker.

“I walked in and saw him and totally cracked up,” she said.

“How cool would it be if we never had to lose another person to drugs?” she asked.

Potter discussed bullying and her own experiences when kids pushed her down, forced her to eat sand and called her the “r-word.” She said she will never let kids or adults go through that type of harassment and has traveled across the country to speak out against bullying.

“I’m trying to let everyone know that some words hurt people,” she said. “I want to live in a world where people care about other people.”

Best Buddies, a non-profit organization that pairs people with intellectual disabilities with abled individuals to form life-long friendships, funded the event. The University’s chapter is the largest in the country and has about 150 University students and 75 individuals with disabilities involved, said Kristen Olsen, co-president and junior in Education.

This is the first event of its kind for the Registered Student Organization. Their interest was sparked after hearing that Potter was involved with another Best Buddies chapter, said Jenna Aronson, co-president and junior in Education.

“We’ve never done an event like this before,” Aronson said. “We thought that she would make a really positive impact not only on our club, but on our campus.”

Potter was named to the President’s Committee for People with Intellectual Disabilities in 2011 by President Barack Obama. The committee consists of 21 citizen members appointed by the president and 13 federal government members who meet periodically throughout the year to give advice to the president and to the Secretary of Health and Human Services.

She has been on the international board for Best Buddies for three years and is an ambassador for Special Olympics, among others.

The event ended with a question-and-answer section in which Potter received questions about “Glee,” advice on how the University can be more inclusive and her advocacy work. Her favorite co-star is Jane Lynch and her favorite song performed by “Glee” is “Applause” by Lady Gaga.

One audience member asked Potter if she was connected to her character.

“We’re not related,” she said. “Becky is a whole different person. She’s mean, evil and a little beotch. But Lauren is pretty nice … sometimes!”

Aronson and Olson hope that Potter creates a long-lasting impact on campus.

“I’ve had to work really hard in my life, overcome challenges, bullying and prejudice — we all do,” Potter said. “Never, ever stop daring to dream, and never stop reaching for the stars.”