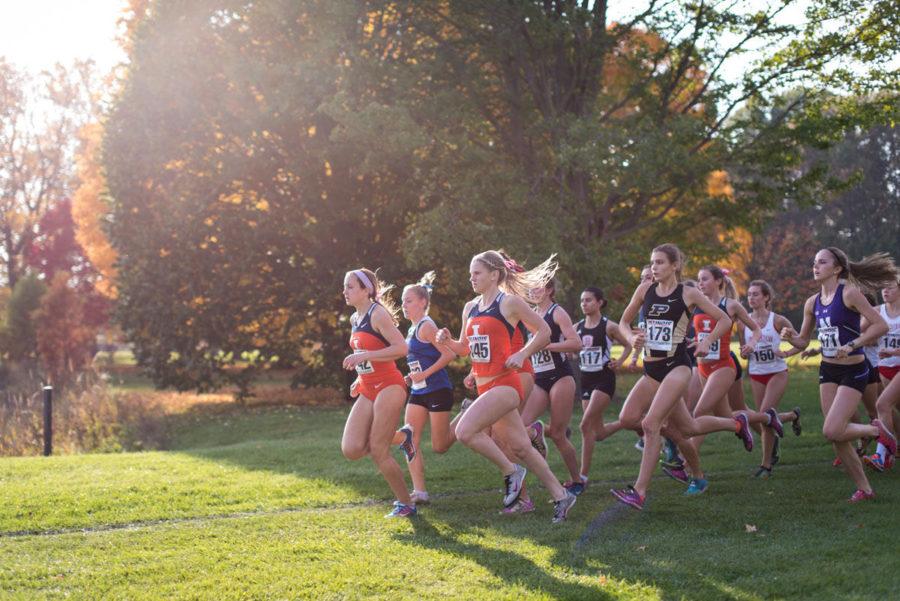 The Illinois women’s cross country team starts strong at the Illini Open 2014 at the Arborteum on Oct. 25.

Another meet in the books and another win were just what the Illinois women’s cross-country team planned on.

Even without key contributors Alyssa Schneider and Amanda Fox, the Illini came out on top. The win made it the third on the year for Illinois and its second in a row.

Even with the win, Falsey believes there is still work to be done over the week, especially with Big Tens looming.

“At conference, we will be racing a 6k,” Falsey said. “I need to work on being more mentally tough during the middle of the race, when staying on pace gets a little more challenging.”

Individually and as a team, a win is still a win and one that brings more momentum to an already momentum-induced team.

For junior Britten Petrey, the team win was a momentum booster heading into the Big Ten Championships next weekend. The win showed how competitive the team is and, going into next weekend, shows how ready it is for its toughest challenge.

“I definitely feel like we’re ready for the challenge,” Petrey said. “The first day we got to practice we already made our goals that we wanted to accomplish at Big Tens, so I think that’s been our prime focus the entire season with the different races that we’ve planned.”

Petrey continued by saying how excited and happy she is seeing how the season has paid off for her team as they move forward.

Freshman Samantha Lapp has appeared in more meets than any freshman this year (three), but due to an illness, she was sidelined from the previous two meets.

Coming into the season as a walk-on freshman, Lapp said she never thought she would appear in the number of races she has. She finished the seven-team meet 26th of 77 runners.

The Illini also had a surprise visit from former Illini Tonya Williams.

Williams, a former Big Ten track champion in the 1990s, spoke to the team after the win.

She spoke to the team about trusting the coaches, the process and the program and believes with that will bring success.

She also believes applying that message now will lead this team to a strong showing at the Big Ten Championships next weekend.

Williams spoke to the team before the race and her talk was something that stuck with it during the meet, as the Illini prevailed with another win.

Alex can be reached at [email protected] and on Twitter @awallner93.