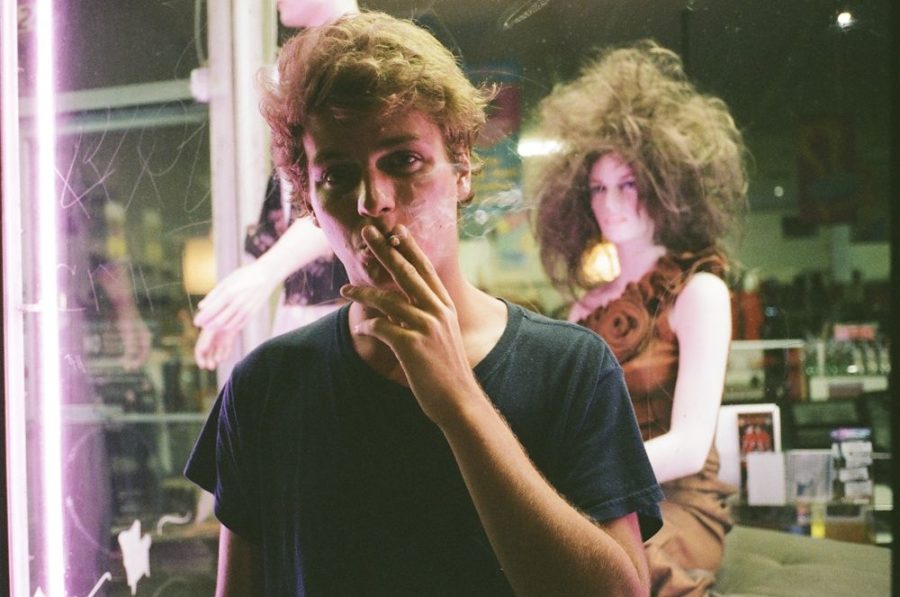 A Mac DeMarco photo session at The Echo in Silver Lake.

From Montreal to Brooklyn, Mac DeMarco has quickly turned into a laid-back, surf-rock sensation with a propensity for songwriting. His most recent album, “Salad Days,” placed No. 11 on Billboards US Top Rock Albums, and DeMarco’s songwriting has transformed his persona on the newest record. From gap-toothed prankster to a reputable songwriter with a huge cult following, DeMarco is maturing his character while reserving the right to crack a joke every now and again.

At 24, DeMarco has released three successful albums, with first debut solo album, “Rock and Roll Night Club,” playing a major role in his jokester image; the entire album could easily be mistaken for an Elvis impersonation. However, his second album, “2,” released by record label Captured Tracks gained him an even larger following.

This past year, he has been touring all over the country and will continue on to a European tour after his performance at Foellinger Auditorium on Wednesday at 7 p.m. Despite his jokes, DeMarco is an individual who is still dealing with the rise of fame and society’s infatuation with superstardom. The Daily Illini had the chance to talk to DeMarco on the phone and go in-depth on how his success has completely changed his life.

The Daily Illini: Can you tell me about how you got started as the solo Mac DeMarco?

DI: When did you start to notice people responding to your music?

MD: I made “Rock and Roll Night Club” and my friends obviously listened to it, and I would play shows and people seemed to like it, but “2” was the album that really took off and sold out my shows.

DI: Can you tell me about “Salad Days” and the writing process for that album?

MD: It was sandwiched between two really long sessions of touring, so it was kind of rushed. I was on tour a very long time before that, but I had to churn out an album quickly.

DI: Has your wave of fame taken away from your love of music?

MD: No, I don’t think so. I don’t want it to feel like a job, but it can get a little grueling at times being on tour for so long. It’s all I really ever wanted — not to have a normal job — I really do love what I do.

DI: You’re known to be a jokester musician. Was that purposeful or did it evolve on its own?

MD: I mean I honestly think it’s my personality. I don’t take myself very seriously, but when I think people are being stupid, I am going to be equally as stupid back.

DI: Does it weird you out when interviewers ask you strange questions, like your milk preference, for example?

MD: I think it’s lazy journalism. They think I’m this quirky guy and will run with the answer that they know people will giggle at and the goofy weird s**t is on the forefront. But it is also just the way I am. I don’t really know why people want to know what milk I’m drinking.

DI: But you go with it anyways?

MD: I’m not a monkey, so I’m not going to do anything that I don’t want to do. But the questions some journalists ask are stupid. They don’t realize that I’m just being stupid back, but in reality, I don’t understand why they’re asking me what type of milk I’m drinking. Why do they want to know that? I don’t understand why people care.

DI: What has been the best part about touring and becoming so well known?

DI: One last question — who are you listening to these days?

MD: I generally just listen to older stuff, but for newer bands, I’m listening to Connan Mockasin, King Gizzard and the Lizard Wizard and Jerry Paper. I want to give those guys some love. God Bless.

Frances can be reached at [email protected]