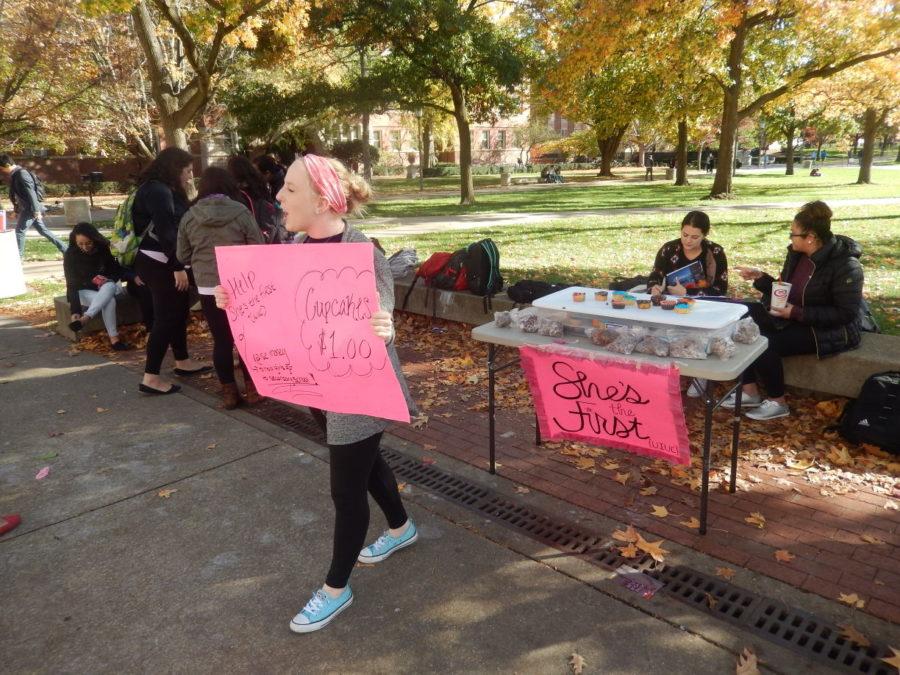 Maggie Klinge, sophomore in social work, sells cupcakes on the Quad to raise money for “She’s the First” on Tuesday.

A Registered Student Organization at the University called She’s the First is working to provide girls in developing countries with the same educational opportunities available to students in the U.S.

She’s the First is a national, nonprofit organization sponsoring girls from underprivileged countries to become the first in their families to graduate from secondary school. The University established its own chapter in 2013.

The organization raises money for the girls’ scholarships through fundraisers and bake sales that are put on by the 117 high school and university chapters. She’s the First has helped more than 390 girls in 10 countries, according to its website, and works with other organizations in those countries that have the same mission.

Alex Horton, public relations chair for the RSO and senior in LAS, said the University chapter is currently working with a group in Guatemala called Starfish One by One.

“The idea is our chapter sponsors a specific girl within that organization,” said Janice Lin, vice president and sophomore in LAS. “This year we are sponsoring Milsa in Guatemala. She’s currently in ninth grade, and we continue to fund her throughout the year.”

The student that the chapter sponsored last year was in her final year of school and was able to graduate with the help she received. The student they now support was selected by She’s the First’s headquarters based on her need for help.

Abigael Friling, president of the RSO and senior in LAS, said the amount of money the chapter needs to raise is also determined by the organization’s headquarters, which sets a goal based on the country and the girl’s grade level.

“This year the national headquarters, just as a general goal, wanted every organization to raise at least $600, and we’ve definitely already exceeded that amount,” Lin said.

The University chapter holds biweekly meetings Wednesdays at 6 p.m. in 223 Gregory Hall as well as fundraising bake sales on campus throughout the year.

She’s the First is hosting a nationwide bake-off for its chapter from Monday to Friday. The bake-off allows chapters from various colleges to compete and raise money for the girls. The University’s chapter is selling cupcakes and puppy chow on the Quad from 11 a.m. to 5 p.m. for the bake-off with the help of volunteers from partnering RSOs, including the American Medical Student Association, the National Organization for Women and Alpha Phi Omega.

The chapter also participates in what they call “Cupcake Corners” every other Friday and Saturday, in which they sell baked goods on the corner of Green and Sixth streets from around 10:30 p.m. to 12:30 a.m.

With more than 45 registered members, Horton said She’s the First is always looking to welcome new members and work with other organizations.

“We like collaborating with people,” he said. “If anybody is a part of an organization and sees room to partner with us for an event or fundraiser around our field — it doesn’t even have to be directly related, just as long as there’s a link — feel free to reach out; we encourage it.”

Horton said he and other members of the RSO felt it was their duty to help the girls overcome the obstacles, which prevented them from going to school.

“We’re living in a smaller and smaller world — how can we help each other out?” he said. “We are relatively stable in terms of our educational achievements. How can we help people in countries where that’s not the case get to where we are now?”

Lin said without the help of She’s the First and its partner organizations, the chances of the girls gaining economic independence would be slim.

“By allowing them to receive an education … they can learn how to get things like microloans to start their own businesses so that they don’t always have to depend on their families or a male figure in their life,” she said.

Lin added that an education also allows the girls to be more informed about issues like health care and sanitation.

Many of the girls that She’s the First helps return to their communities and promote change within them post-graduation, Friling said.

“So we’re not just helping one person,” she said. “In the grand scheme of things, we’re helping the whole community that they’re from, and then hopefully, eventually, the whole country.”

Lin said this is the essence of the mission that She’s the First operates on.

“We’re hoping it’s kind of like a butterfly effect,” she said. “By helping a few girls and funding their education, hopefully they will be able to gather the knowledge and resources to help the next generation.”