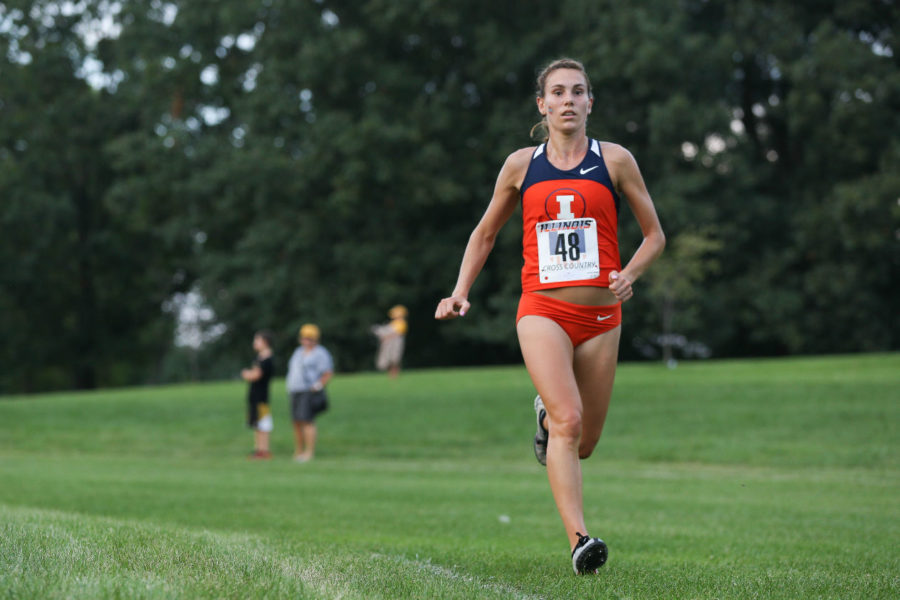 The Illinois men’s cross-country team starts off strong at the Illini Open 2014 at the Arborteum on Saturday. The team will compete for the Big Ten Championship on Sunday.

Alyssa Schneider is the Illinois women’s cross-country team’s best runner and as the team prepares for the Big Ten championships on Sunday in Iowa City, Iowa, she is aiming for a strong finish, something she is familiar with.

When they met, Jones said he immediately felt trust and respect from Schneider.

“Of personal significance, being a last-minute hire, was her willingness to accept me as her coach,” Jones said. “Even though we didn’t have an established relationship prior to my arrival on campus, she showed immediate faith in me and the program.”

Having someone like Schneider on the team is what Jones says gives the program credibility. He said her attitude benefits the whole team.

“She is a quiet leader, so she doesn’t broadcast what she is doing,” Jones said. “I’m probably not fully aware of the depth of her impact, but what I do know is that it is substantial.”

“She is an incredibly hard worker and a lot of the girls, including myself, look up to her,” Falsey said. “She is very motivated and diligent in her training and I know that she is going to continue to have a positive impact on the team.”

Stress fractures in both shins forced Schneider to redshirt her freshman year. She came into her second season with a lot to prove.

“Getting hurt is usually a learning experience mentally and physically,” Schneider said. “I think that I started to learn a lot more about my body and my training after getting hurt and I learned to be patient with my progress.”

Schneider’s sophomore year was the best of her career. She won once and placed in the top 10 three times. But nothing compares to her postseason success.

She ended the season with a trip to the NCAA championships after placing fifth at the Midwest Regional. Schneider she can only get better.

“I was happy with my accomplishments from last season but there was still a lot more that I wanted to improve on,” Schneider said. “It was great momentum, though, to see that I was improving and getting closer to reaching some of my bigger goals.”

Schneider finished 28th at Big Tens last season and is looking for a better finish on Sunday.

It will not be easy. The Big Ten has three teams ranked in the top 10 nationally: Michigan State, Michigan and Wisconsin.

Schneider is not the only runner that expects a good performance come Sunday.

“I expect Alyssa and the rest of our team to give it our very best at Big Tens and leave it all out on the course this weekend,” redshirt junior Britten Petrey said. “That is all I or the team could ask for.”

Junior Amanda Fox hasn’t won any races, but has had the second-fastest times of the fall after Schneider. Between Fox, Schneider and Petrey, the Illini return three of their top five finshers from last year’s ninth-place finish at Big Tens. In addition to those three is redshirt junior Colette Falsey, who was named Big Ten co-Athlete of the Week after picking up a win in last weekend’s Illini Open.

But for Schneider and the Illini, expectations for the season aren’t as important as patience.

Alex can be reached at [email protected] and on Twitter