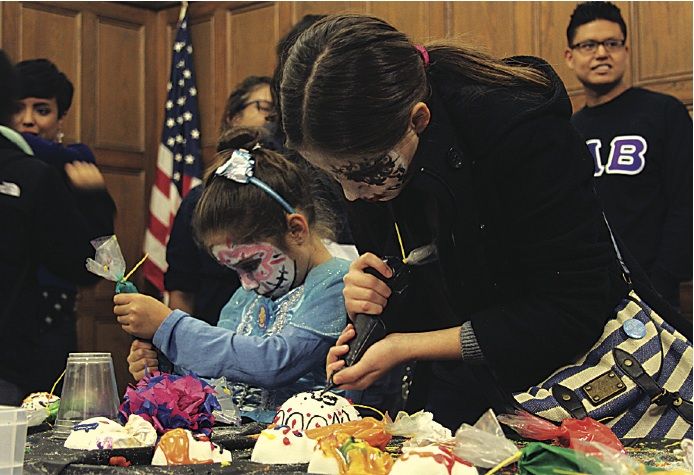 La Casa Cultural Latina, University YMCA and La Casa Alliance of Student Organizations came together to celebrate Dia de los Muertos on Thursday at the University YMCA. Latzer Hall’s perimeter was aligned with altars in commemoration of loved ones and colorful banners to liven up the dim room.

There was music, snacks and children running around with their faces painted to resemble sugar skulls, the symbol of Dia de los Muertos.

“The face-painting is not putting on a costume, but it’s more so a lot like the honoring and the welcoming back,” said Berenice Sanchez, assistant director for La Casa Cultural Latina. “Really, it’s like a homecoming for those who have passed. So them coming back home and getting to reconnect for the days that they have.”

Dia de los Muertos, or Day of the Dead, is two full days of celebration and always takes place on Nov. 1 and 2.

The first day is dedicated to commemorating children and the second is for the adults who have passed away. It’s believed that on those days, the souls of those who have passed away come back to Earth to reunite with their families, according to Sanchez. The holiday dates back to the Aztec Empire and relies on bright, colorful celebrations to honor the deceased.

“It is not a day that’s for worshipping death. It’s a day in honoring life. You’re honoring the people that come before us who are no longer here in this realm, but we honor them by remembering them and keeping them in our memories. That’s what Dia de los Muertos is about, not about gloom, sadness or scariness. It’s supposed to be a joyous time,” said Eric Garcia, who was the guest speaker from the National Museum of Mexican Art at Thursday’s event.

At the event, Garcia gave an in-depth presentation of the history and tradition of Dia de los Muertos.

Dia de los Muertos is celebrated differently depending on the country and region, Garcia said.

Usually what happens is families go to the graveyard on Nov. 1 and may bring sugar skulls, fresh marigolds and other favorite foods or possessions of the departed. Later in the evening, they will light candles and sing by their loved one’s grave.

For those who can’t make it out to the graveyard, they create altars at home.

These altars traditionally include staple items such as flowers, food, sugar skulls, photographs and candles. Nowadays, a lot of altars have evolved to include elaborate displays of artwork. Many have been used for political purposes.

In the past, student organizations on campus have created altars dedicated to 9/11 victims and victims of bullying. Thursday’s event featured an altar that commemorated victims of violence at the borders.

The holiday allows people to honor the dead, in their own way.

“It’s like Christmas, you know, everybody has their own Christmas tree during the holiday season. We have a table with pictures, candles and stuff like that,” said Yadira Ramirez, secretary of the Mexican Student Association and sophomore in LAS.

Ramirez’s earliest memory of creating an altar on Dia de los Muertos is that of her great grandfather’s altar. Because her family migrated from Mexico to Chicago without bringing many possessions, they resorted to using his picture, candles and some other staple items such as the marigold flowers and traditional Mexican bread.

“I think it’s important to keep a connection with my culture in order to provide the same cultural experience for my future kids and keep it ongoing through generations,” Ramirez said. “I think it’s very important, and it’s a part of who I am.”

Becky can be reached at [email protected].