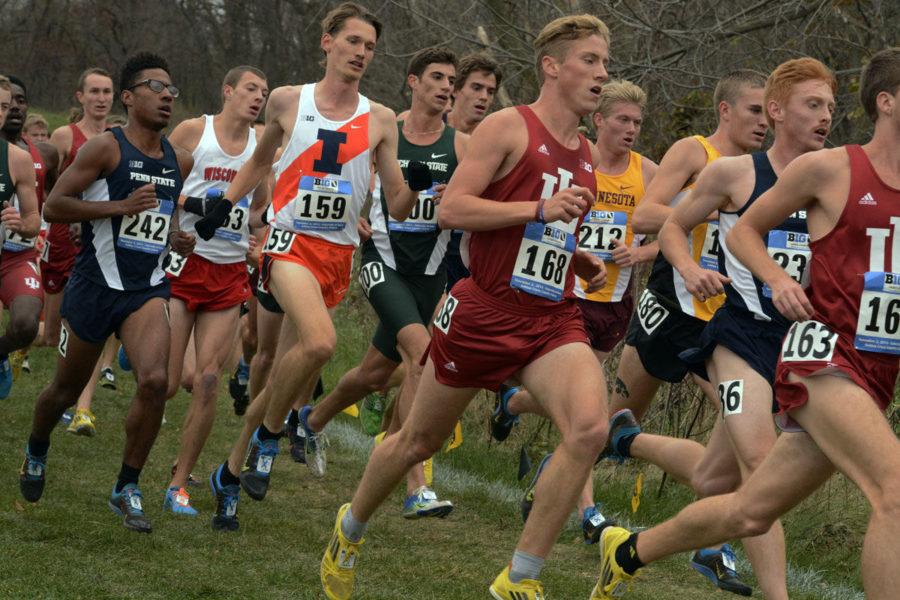 With a chance to beat four ranked Big Ten opponents, Illinois came into the conference championship hoping for a top-five finish.

“The goal was a little bit higher,” head coach Jake Stewart said. “We felt as though fourth, fifth, somewhere around there was a reasonable goal and I think for the most part we put ourselves in position to go out and finish in that range, we just didn’t close out as well as we would have liked to.”

Illinois finished behind No. 6 Wisconsin, No. 14 Michigan, Penn State, No. 20 Indiana and No. 22 Michigan State. Wisconsin sophomore Malachy Schrobilgen finished first overall for a second year in a row.

Illinois senior Jannis Toepfer’s goal was to improve his sixth-place Big Ten finish in 2013 and compete with Schrobilgen for the top spot. Sunday, however, did not go as planned for him.

Toepfer finished first overall for Illinois and 23rd in the meet, completing the race in 24 minutes, 14 seconds.

“That was not what I was looking for,” Toepfer said. “It was a huge disappointment.”

Throughout the early going the 105 runners stayed in a close pack. The four-kilometer mark was when runners began to break away from the group and it was also when the race began to take a toll on Toepfer.

“I got out fine, right where I wanted to be,” Toepfer said. “Once we went back up that hill again for the second time, suddenly I just felt my legs getting really heavy and the race started moving and I couldn’t move.”

Finishing exactly one second behind Toepfer in 24th place was Illini junior Ian Barnett, who finished with a time of 24:15. Seniors Bryce Basting and Brendan McDonnell took 30th and 38th place, respectively. Junior Paul Zeman came in 45th place while junior Liam Markham, sophomore Will Brewster and freshmen Garrett Lee and Alex Gold all finished beyond 50th place. Despite the team not meeting its expectations, Barnett was content with his individual performance, as he felt it was one of his better races of the year.

Barnett also felt that the team can take away some positives from Big Tens.

“At the end of this race, looking at the results, our one-to-five gap I think was second out of all the teams so that’s really good to see everyone move up from the back and kind of finish together,” Barnett said.

Up next for Illinois is the NCAA Regional Championships in Peoria, Illinois. Stewart wants to see his team move past Big Tens and focus on improving.

“It’s not the end of the world,” Stewart said. “We have to continue to put some work in next week, get our legs under us and go to regionals and try to move up a couple spots into that meet. That’s about all we can do.”