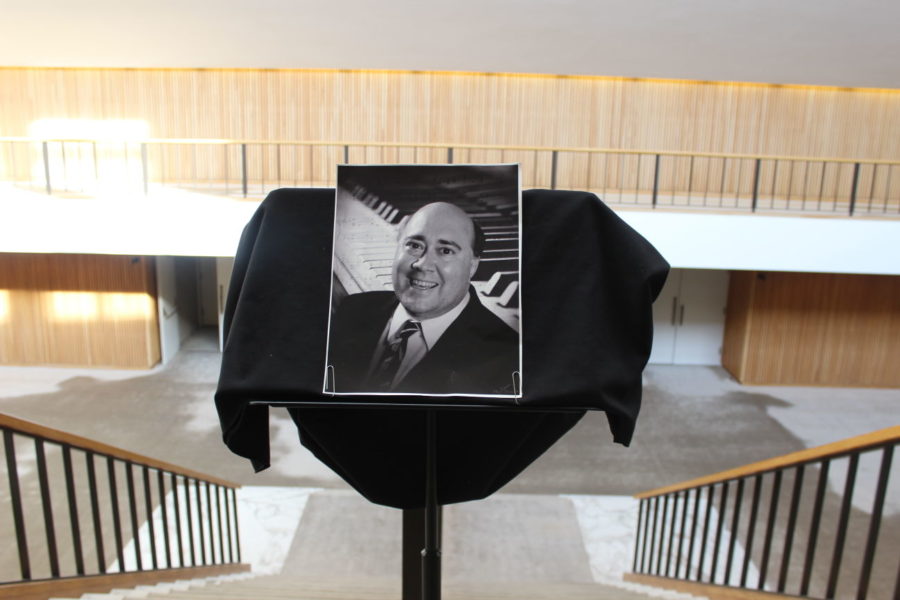 Students, faculty, staff and members of the community joined together in Foellinger Great Hall to celebrate the life of Kent Conrad. Conrad died unexpectedly on Sept. 5.

On the first day of his 2005 trip to Italy with his local community choir, Dr. Kent Conrad performed on the organ in front of a crowded St. Peter’s Basilica in Vatican City.

Holly Jordan, a close friend of Conrad’s, will never forget the moment.

“The organ was facing the choir, so we could see his face,” Jordan said. “He had on his usual performance face, but his eyes were very wide.”

On Monday, family and friends gathered in the afternoon to share similar stories at the Krannert Center for the Performing Arts and celebrate the life of Dr. Kent Conrad, an instructor in the Department of Theater. Dr. Conrad, 52, died unexpectedly on Sept. 5.

The Eastern Illinois University Faculty Brass Quintet, the Unitarian Universalist Church Choir and The Chorale, a local community chorus, performed compositions during the two-hour service. Colleagues from the Department of Theater and the School of Music performed tributes as well and recalled fond memories of the professor.

Conrad was the organist and accompanist since 2004 and music director since 2008 at the Unitarian Universalist Church Choir. Axel Gehrmann, a close colleague at the choir and opening speaker at the memorial, described him as “treasured, admired and loved by many people.”

“He could be equally at ease playing pieces by Bach or belting out show tunes,” Gehrmann said.

Bri Sudia, a University alumna, sang “With So Little To Be Sure Of.” Sudia, who graduated in 2012 with a Master in Fine Arts in acting, recalls taking Conrad’s musical theater class.

“I remember I had to record music for an audition and he took time out of his day to play for me,” Sudia said. “He recorded it as many times as I wanted to until I was happy. He was always ready to help, always ready with kind words. An overall wonderful man.”

During the ceremony, a video was shown on stage with pictures friends and colleagues captured of Conrad. The pictures were accompanied with a piece titled, “For Pasha,” which he composed.

Conrad majored in Classical Languages at Franklin and Marshall College with a minor in music. He went on to receive a Masters in Arabic Studies at the University of Pennsylvania and later a degree in law at Dickinson School of Law at Penn State University. Conrad also served in the Air Force for four years as a Chinese linguist.

Despite his many talents, Conrad’s one true passion was always music. His mother, Dr. Marion Conrad, took to the podium Monday to recall his early love for the piano.

“When he was about 7 years old, my husband and I bought him a piano,” Marion Conrad said. “When he saw the delivery truck from the driveway, he ran across our lawn and into the house. He was just so happy. Piano was his life, and it was in his soul. I used to always say I had the best music to clean by than any other mother around. He was always entertaining me.”

Throughout the ceremony, a single picture was shown on the stage of Conrad dancing in the hills of County Clare, Ireland. The image was taken on a trip with The Chorale. When asked by his colleagues what he was doing, he responded by saying that he was reenacting the “Sound of Music.” During his time as accompanist for The Chorale from 2004 to 2009, he also traveled to Scotland and Italy, as well as performing at the Vatican.

Conrad will be missed by his family, friends and co-workers for his brilliance, friendship and passion for music.

“I think that that’s what he did for all of his students … he always had a sense of lightness about him as a person,” Sudia said. “We just really wanted to celebrate him today. He was always so hopeful — hopeful for young singers to become stronger singers. I think that singing a song filled with such hope is the best tribute I can think of to honor him.”

Sarah can be reached at scnolan2dailyillini.com.