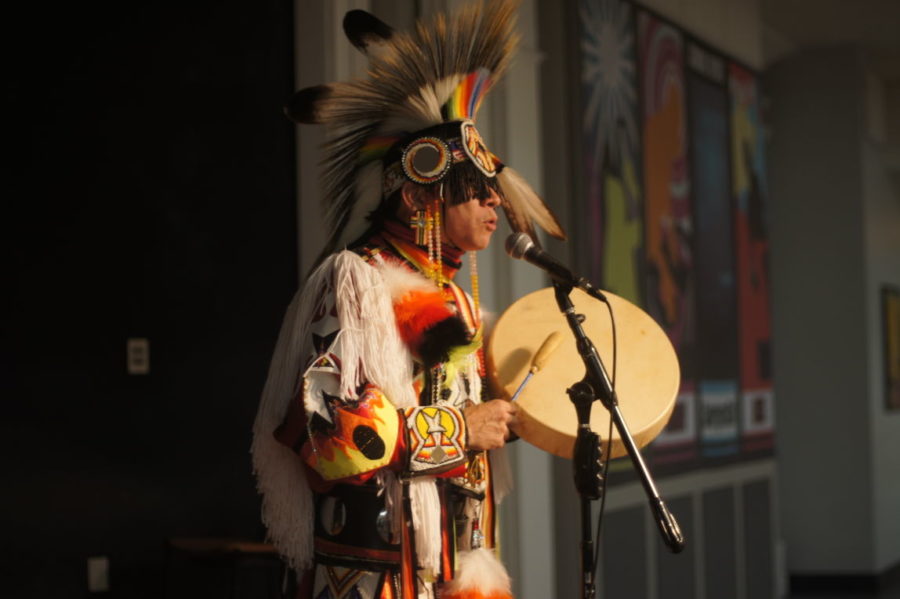 When Ronnie Preston got on stage at the Courtyard Cafe on Tuesday afternoon, most audience members were not expecting him.

Silence fell over the room as this figure, dressed in Native American chief regalia, walked toward the microphone to introduce himself. There was no orange and blue paint smeared strategically on his cheeks to channel school spirit, nor were there any synthetic red and black feathers adorning his war bonnet.

His headdress’ feathers were real. The emblems sewn across his authentic dress had cultural and ancestral significance, including an American flag patch on his leg to represent his father who served in World War II. He wasn’t expressing support of or opposition to Chief Illiniwek or making a late homecoming cameo to an unsuspecting crowd. Instead, Preston got on stage to fight misconceptions.

Moments later, Preston proceeded to dance his native grass dance, one very similar to the one made infamous by the now retired Chief Illiniwek; however, there was no rhythmic clapping to the beat of Oskee-Wow-Wow, just silence sported by a puzzled crowd. While Preston personally never brought up the image of Chief Illiniwek, he said he aimed to avoid misconceptions about Native American culture.

This month’s events include another performance by Preston on Wednesday at noon at the Courtyard Café, visits from speakers such as Dylan Jennings and Georgina Roy, and a harvest dinner, which takes place Nov. 18.

Smith, who is of Navajo descent, and the rest of the Native American House staff members will be hosting events related to Native American culture on 16 days during November, attempting to iron out fallacies imposed by the media, history books and inaccurate urban folklore passed on by word of mouth. These include stereotypes that can be seen in Western-style and other Hollywood films.

“A lot of people say they’ve never seen a Native American before in real life,” she said. “It’s often in a stereotypical way and is not as accurate.”

On a campus still bitter about being stripped of its mascot, getting rid of these misconceptions isn’t the easiest of tasks, Smith said.

The trivial manner in which images of Native American culture are handled on campus and in society today is one that Joy Harjo, professor of American Indian Studies of Mvskoke and Creek descent, finds mind-boggling.

Harjo said that there are rich, indigenous cultures “from Canada, all the way down to Tierra del Fuego” that have, historically, been under-appreciated and misunderstood to the benefit of the Euro-centric cultures that colonized the Americas centuries ago.