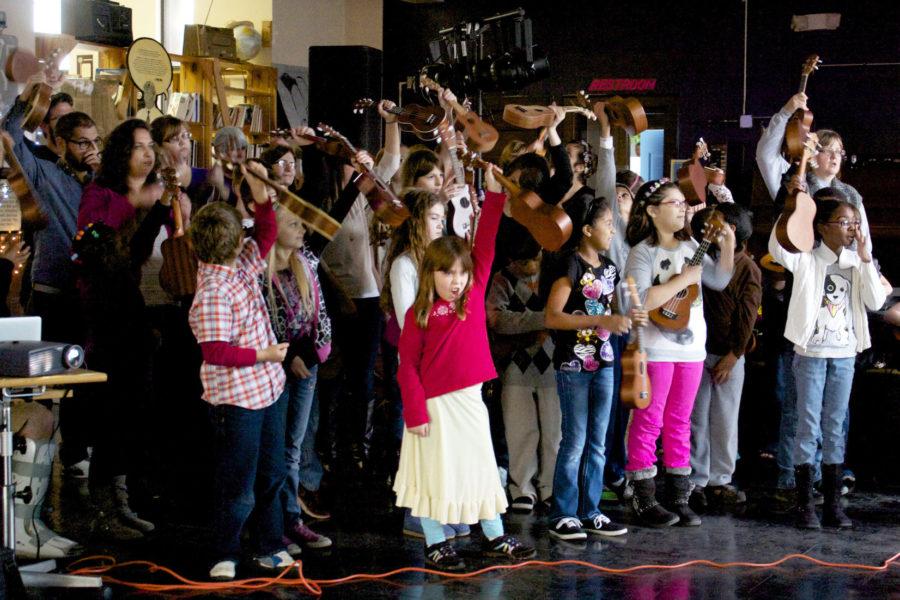 Members of the Homebrew Ukulele Union, a group from the University of Illinois that make their own Ukuleles, write songs, and perform, combine with students from Robeson Elementary School for a sing-along at the CU Folk and Roots Festival. The event was held at the Independent Media Center in Urbana on Saturday, Nov. 3.

The Champaign-Urbana Folk and Roots Festival may not follow the norm of music festivals, where attendees purchase tickets and passively observe the artists play their set.

In past years, the festival has been host to the blues musician Blind Boy Paxton, who has performed at the now defunct 88 Broadway at Lincoln Square Mall in Urbana. Paxton invited the audience to gather around him and sing along, “breaking all the rules” while emphasizing that music is for everyone, according to Brenda Koenig, this year’s co-chair for the event.

The sixth annual Champaign-Urbana Folk and Roots Festival is a community-sponsored music festival run completely by volunteers. It kicks off Thursday at 5 p.m. during Krannert Uncorked with a performance by Americana singer Dom Flemons and the jug band Bones, Jugs ‘N Harmony. The festival continues Friday and Saturday in various places throughout downtown Urbana, including the Urbana Free Library, The Iron Post and the Landmark Hotel. A full schedule of bands and list of venues can be found on the festival’s website.

A wristband for all festival venues and activities for both days is $30, while individual evening wristbands are $20, which allows festival-goers to visit various venues. All tickets for single venues can be bought at the door for $15; however, all evening workshops, jams and sing-alongs are free and everything before 5 p.m. on Saturday is free.

In addition to featuring touring acts, like Woody Pines, the festival also gives local bands exposure. Woody Pines, which is from Nashville, Tenn., is reminiscent of bands like Old Crow Medicine Show with elements of American tradition and indie rock, according to Matt Winters, co-chair on the board of directors for booking and assistant professor of Political Science.

“We have groups in the community participating in the festival, and we try to mix these groups in with some of the headline performers, so that’s more exposure for them,” Winters said. “Hopefully it’s a good opportunity to play with some of these people and start relationships.”

A main tenet of the festival is based on community participation, Koenig said.

“When we started the festival, that was one of our main pushes — we wanted it to be participatory. That means that people could actively participate in it. And to us, we feel strongly that folk music is a participatory type of music. Anybody could do it and anybody should do it. Everybody is welcome,” she said. “I think a lot of times music is all about identity, like what band you listen to or what type of music, but with folk music, it’s almost trying to break a little bit of that, say that the identity is that we are a community and that we do things together.”

For Winters, the Folk and Roots Festival is also a way to come together as a community to benefit Urbana.

“I think the festival is meant to be a community festival as well in the sense that we use these venues throughout downtown Urbana and support the local businesses in that way, getting people to move between them and to create street life on a sometimes cold, November evening,” he said.

The folk trio, Laura Cortese and the Dance Cards, is returning this year to play at the festival. Despite being a touring act, the audience was willing to sing along and participate in Cortese’s performance, in the spirit of the festival.

“That was a nice surprise, because sometimes you come into a place where you’ve never been, where you don’t really know the audience — they’re not really our cultivated audience and we set out to get really engaged and involved in the show and sometimes people don’t actually just jump on board and go there with us,” said Cortese, who plays the fiddle in the trio. “It was really nice to walk into this town where we’d never been and the audience just went for it.”

Because the event is run by volunteers, the event is more responsive to what people want, according to Winters, allowing it to evolve each year.

“It’s more than if we were having a lot of corporate sponsorship, this really is the community putting the festival together,” Winters said. “There’s nobody who gets paid to do the festival; there’s staff members. Everybody is just volunteering their time and that helps us make sure the festival is what we want it to be.”

As a community-centered event, the festival is something that allows for people of all ages to explore how folk music has been intertwined with America’s culture.

“I hope people challenge themselves to open their minds and to come out and to discover this kind of music,” Koenig said. “It’s great. It changed my life when I was living in Chicago and playing in rock bands.”

Susan can be reached at [email protected].