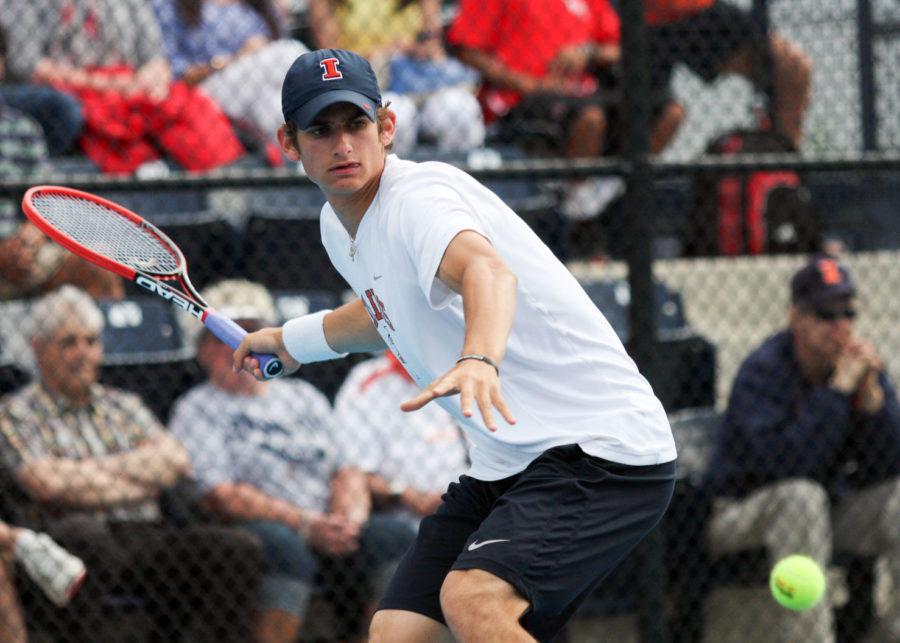 The Illinois men’s tennis team will wrap up the fall season at the ITA National Indoor Intercollegiate Championships this week. There will be strong competition from around the country at the Billie Jean King Tennis Center in Flushing, New York — the home of the U.S. Open. Jared Hiltzik will compete in the singles bracket, while Tim Kopinski and Ross Guignon will compete in doubles.

Hiltzik qualified for the tournament after taking second at the ITA Midwest Regional Championships three weeks ago. At that tournament, Hiltzik lost to Ohio State’s Mikael Torpegaard. Hiltzik is back in New York for the Championships for the second consecutive year.

Last year, Hiltzik reached the finals of the tournament, where he lost to UCLA’s Clay Thompson. Before that, Hiltzik went on a tear, knocking off two of the country’s top-10 players to advance. Now, Hiltizk comes in as the one of the nation’s top-ranked players.

“It’s always good to be in surroundings you’ve been successful in before,” head coach Brad Dancer said. “Jared hasn’t played that well this fall, and this is a chance to end the fall on a high note.”

Hiltizk played at the Billie Jean King Tennis Center’s outdoor courts at the start of the season for the inaugural American Collegiate Invitational. He was brought in as a last-minute alternate, but he suffered a first-round loss, once again to Thompson.

Hiltzik has had an up-and-down fall. While he had a nice semi-final run at the Midwest Regional Championships, he’s currently on a five-match losing streak after the Texas A&M Conference Challenge.

The tournament field is stacked. Eight players from the preseason top 10 will be competing. Dancer said Hiltzik faces a tough opponent in the first round, No. 28 Ryan Shane of Virginia. Shane was a member of the Cavalier team that finished ranked fourth in the nation last year. He received a bid to the tournament after winning the ITA Atlantic Regional. Shane also won the doubles title at the Atlantic Regional with partner Luca Corinteli.

In their first match, Kopinski and Guignon will also face Virginia’s Shane, along with Corinteli. It’s their third time playing together this fall season after the Conference Challenge and making the consolation finals at the All-American Championships. If they get past their first match, they’ll face No. 5 Nick Chappell and Will Stein of TCU, a pair that defeated them at All-Americans.

While Hiltzik and the team of Kopinski and Guignon are the Illini’s highest ranked players, Dancer said none of them has played well this fall. This tournament offers a chance to end the fall on a positive note.“Go there to play, play as hard as you can … competing the way we need to compete,” Dancer said. “If we can do that then we can win matches.”