“NaNoWriMo” challenges students to write a 50,000-word novel in a month 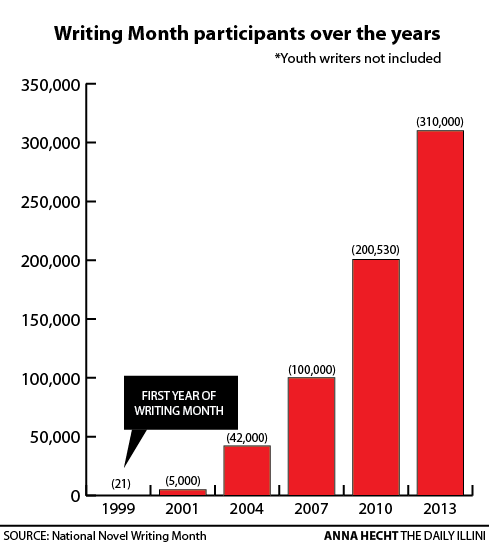 Write 1,667 words. It’s a task that many college students complete at least once during their college careers, but for some writers, it is done every day for 30 days.

That is the goal of National Novel Writing Month, otherwise known as “NaNoWriMo,” which poses the challenge of completing a 50,000-word novel in one month’s time.

“It’s difficult to make sure you have time to do this,” said Nora Marino, sophomore in LAS. “To be able to balance schoolwork and writing and decide what’s more important.”

Before beginning NaNoWriMo, Marino established three facts: she wasn’t going to have a life in November, she would have good time management and keep up with homework, and she would get up early to write as much as she could.

Marino, who has been published in The Mochila Review, an international literary magazine for undergraduates, is writing a science fiction, fantasy novel about a society that heavily uses science to create “crazy things,” such as the three dragons that the story revolves around.

Immediately after the dragons were created by the three main characters, all of the power in the world failed, making the planet uninhabitable. The group flies all over Europe in search of materials that can be used to send people to another inhabitable land.

“I don’t think this draft will ever be published because when you’re writing this fast, it’s more of quantity over quality,” Marino said. “My character can talk about the sky five times in a row and I’m not going to argue with her.”

NaNoWriMo has a website where participants can register to track their progress, interact with fellow writers and search for write-ins in their area. A write-in is a group that meets at a certain time each week to write and can be found all over the world.

Rachel Davis is a member of CU WriMo, the Champaign-Urbana write-in group, which currently has 121 members. This is her first time participating in NaNoWriMo, although she has participated in JuNoWriMo, a NaNoWriMo spin-off that takes place in June.

“The biggest struggle is going to be getting to 50,000 words,” she said. “I tend to normally write shorter things like novellas just because plotting out that much and actually writing that much — I’m not very good at long stuff.”

Davis completed an outline for her novel before Nov. 1 so that she only had to focus on writing when the month began.

Kirby Gamsby, senior in LAS and former Illini Media employee, has completed NaNoWriMo a few times but never finished any of the novels she began. For this month, she is writing a half noir, half ghost story, she said.

“My favorite part of NaNoWriMo is that it forces me to write under stress, which I strangely like,” Gamsby said. “I also have so many stories in my head at all times that it’s nice to get at least one of them out.”

For Marino, she believes getting the story out on paper is the hardest part.

“Everybody says at one point or another that they want to write a book,” Marino said. “It’s the idea that you get past the things that hold you back to write that book. You write a sentence and it’s not the most perfect thing in the world, so you go, ‘Oh, this is not perfect, I cannot write this book,’ … then coming back later and saying, ‘Oh, this wasn’t as bad as I thought it was.’?”

Brittney can be reached at [email protected].