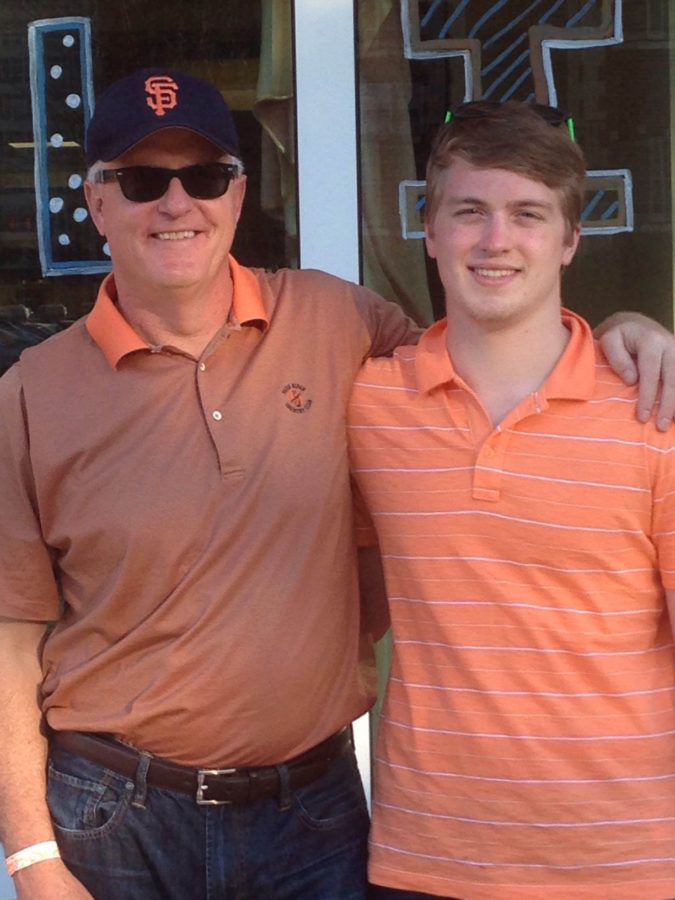 Sophomore Will Sander (right) and his father, Mark Sander, both have been members of the Phi Kappa Psi fraternity.

When Mark Sander comes to campus for Dads Weekend, he will be returning to familiar territory.

Mark, alumnus from the class of 1980, was a member of the fraternity Phi Kappa Psi (Phi Psi) while he was enrolled at the University.

Now, his youngest son, Will, sophomore in Media, has also joined Phi Psi.

This weekend, the duo will be attending Dads Weekend events that were planned by the fraternity.

“Our plans for the day start out with Block, then the football game, then going to an apartment where most of us live since we don’t have a house this year, and finally going to White Horse (Inn) like we have in the past. White Horse is usually the favorite for the dads,” Jake Phelan, external vice president in Phi Psi and junior in LAS, wrote in an email.

Although Mark said he never pressured his son to follow in his footsteps, he has fond memories of his time in Phi Psi.

“I made friends that are life-long friends, and I had a lot of fun, but you know, it prepared me well for a career and it helped me grow up from a boy to at least a little bit of a man,” he said.

Mark recalls that participating in football block, a tailgating event before football games, was one of his favorite memories as a fraternity member.

“You’d do a cookout, then you’d actually go to the game, then you’d have a little post-game party. It was just a whole day full of fun,” he said.

When he comes back to campus for Dads Weekend, Mark said he is looking forward to doing the same thing, but now with a younger generation of fraternity members.

“It’s just fun to meet their friends. We’ll do a tailgate, and it’s not any big deal, but people will just come and go,” Mark said.

He said he is also planning on reconnecting with his own college friends who will be back for the weekend as well as meeting up with Will’s friends.

“It’s nice to meet and hang around young people. In a small way, it keeps you young,” he said.

While some aspects of the Greek system have not changed since Mark’s graduation, there are some major differences.

First, his son will be living in a newly renovated house. The old house, which Mark lived in, is located at the corner of Fourth and Chalmers streets. It has been under construction to make room for a major renovation scheduled to finish in the summer of 2015.

Additionally, Mark said that the fraternity is much more involved on campus then in the late 70s.

“They’re much more involved in charitable activities, they’re just more involved on campus than we were,” he said. “I don’t want to say it was all parties, but it wasn’t nearly as socially responsible of a place as it is now.”

Mark said that the partying aspect of fraternities has also changed since his time on campus, even though the friendship and brotherhood that are emphasized at the fraternity have not shifted.

“It (partying) was a much more open, kind of ignored if you will, aspect of it,” he said. “It was just the daily of being with 70 guys, 40 of whom are close friends of yours.”

Will said that his family definitely influenced his decision to come to the University.

“I’ve been growing up hearing ‘Oskee-Wow-Wow’ and ‘Illini,’ Will said. “Our basement is all decked out with Illini stuff.”

However, Will said that when he first came to campus, he was not sure that he wanted to join a fraternity, and only rushed in the spring after a high school friend brought him to a few Phi Psi events.

He said the group left a good impression because of how genuine and interested the older members seemed in the fraternity and its potential new members.

“These guys actually cared about your character, and you could see what mattered, besides what people think of fraternities as,” he said.

Wherever Will’s journey at the University takes him, Mark said he will have the support of his father.

“I’m proud to carry on the legacy that my dad left for me,” Will said.

Isabella can be reached at [email protected]