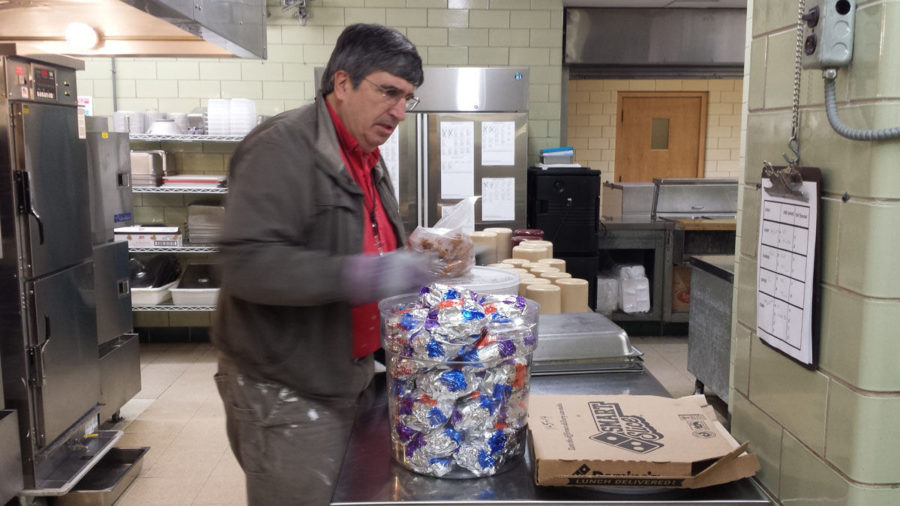 Cliff Maduzia packages excess food from Unit 4’s Central High School’s lunches to bring to the TIMES Center. Maduzia is a volunteer for the Susan Freiburg Memorial Food Surplus program, which provides meals to the homeless.

When Cliff Maduzia walks through the hallways of Westview Elementary School in Champaign each day with large, empty containers in tow, faculty, staff and students know what he’s there to do.

“Hi, Cliff,” a secretary says as he walks into the main office. Another faculty member says hello as Maduzia makes his way to the cafeteria and walks toward the leftover food from that day’s lunch.

Maduzia is the chair of the Susan Freiburg Memorial Food Surplus Program, which picks up leftover prepared and perishable food from local restaurants, grocery stores and Unit 4 schools each day and donates it to local shelters. The program is under the Champaign-Urbana Coalition for the Homeless, a nonprofit organization.

The food surplus program was established in 1989 by Susan Freiburg with the help of Garry Bird, director of the Champaign-Urbana Public Health District. Freiburg passed away in 1996, and Maduzia and other volunteers have worked to keep the program alive.

The organization began with stores and restaurants, before adding Unit 4 schools to the program three years ago. Volunteers now gather leftover lunch food from all the schools in the district.

Without the program, Maduzia added, it would go to waste.

Mary Davis has served as the director of food services for Unit 4 schools for four and a half years. She said when she began, the schools had a serving option in which each student was given every type of offered food. But Davis said this resulted in waste, as students threw away what they did not want.

Two years ago, the schools switched to something called “Offer versus Serve,” in which students choose three out of five food items, one of which has to be a fruit or vegetable. If students don’t want one of the items they picked, they can put it on a share table, or a place where any student can then take it.

Davis said this reduced waste significantly, but there was still food that wasn’t getting eaten.

The uneaten food from the share table is what Champaign-Urbana Coalition for the Homeless donates to the shelters. If there is hot food left over that hasn’t been served, they will take that as well.

“They still have to take three of the five (food items), and two of the things maybe they’ll eat, and one they might not. So this way we still have somewhere good to take our leftovers,” Davis said.

Maduzia starts driving to the schools he’s assigned to at around 12:30 p.m., while the other six volunteers from the coalition also drive to their assigned schools. They fill large plastic containers with milk cartons, fruits and hot foods, including sandwiches and beans. Maduzia finishes at around 2 p.m., before dropping off the food at local shelters such as the TIMES Center and Courage Connection.

The Salvation Army and Canaan S.A.F.E. (Substance Abuse Free Environment) House also participate in the program; however, they bring their own trucks and volunteers to pick up food.

Robert Swinford, who works with the Salvation Army, said the food surplus program allows them to use their limited funds toward other services, while also putting resources to good use.

“Schools have a hard time forecasting how much food they’re going to use,” Swinford said. “We (at the Salvation Army) have 45 men that we help, and we feed them three meals a day and a snack. We’ve had arrangements with restaurants and dining halls, but the school lunch program helps us to spend even less money.”

Maduzia said his organization has received positive feedback from community members and the school district for the impact it has on the community.

“There was a couple that was very excited when they found out that we were starting to do this because they saw the waste and all the stuff getting thrown out,” he said. “The people in the cafeterias are just ecstatic. They’ve been pushing for this for a while, and they were very excited that this was set up.”

He said the program also promotes values and life lessons for the schoolchildren.

“(Through the share tables), the kids are getting exposed to sharing rather than throwing it out,” Maduzia said. “A lot of times I’ll be walking through the school and kids will say, ‘What’s that? What are you doing?’ And I tell them what it’s for, and they get all excited.”

Davis said the program has been helpful in the school district’s efforts to reduce lunchroom waste.

“It is heartbreaking to see food go in the trash,” Davis said. “The fact that we can give it to someone who needs it is wonderful — we might even be feeding our own students. There’s too much waste. We’re working on our side of that through the production, but then there’s the other side, where it’s already made up and we don’t want it in the trash. So it has a good place to go.”