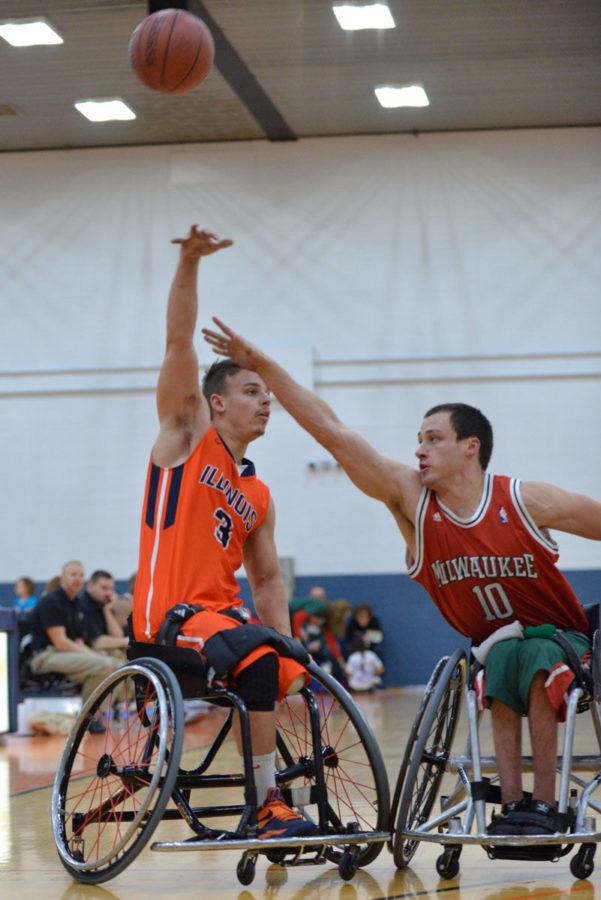 Illinois’ Nik Goncin shoots the ball during the game against Milwaukee at the Activities and Recreation Center on Saturday.

Hard hitting, intense, violent. These might be words you use to describe a sport like football or rugby, but there is another sport being played in Champaign-Urbana that is the epitome of these descriptions: wheelchair basketball.

Everything you expect to see when watching basketball can be found in wheelchair play. Cuts, screens, no-look passes, 3-point plays are all there. The Illnois men’s and women’s teams have both been successful historically, securing 15 and 14 national titles, respectively, more than any Illinois varsity sport.

The two teams hosted the Illinois Classic on Saturday at the Activities and Recreation Center.

Game one tipped off with the Illini men squaring off against the Illini women. The two teams were tied after the first half with 20 points apiece, but the men eventually cruised to a 54-39 victory. Gail Gaeng and Helen Freeman were two bright spots for the women, scoring 12 and 11, respectively. For the men’s team Nik Goncin and Tim Nagel paved the way for their team’s victory scoring 18 and 14 points, respectively. Goncin also dished out six assists.

The Illini men finished the weekend with a record of 1-3 in the preseason tournament. The women lost both of their games, both of which were against male competition.

The Illini men fell twice to the Milwaukee Wheelchair Bucks of the National Wheelchair Basketball Association by scores of 76-38 and 88-51, and lost once to the Rehab Institute of Chicago Hornets, 58-46.

The men’s third matchup of the day, a 3:15 p.m. tip against the Bucks, started off neck-and-neck before Milwaukee jumped out to a 48-28 halftime lead. Goncin finished with 23 points for the Illini. Jacob Counts and Nate Hinze led the way for the Bucks, dropping 23 and 22 points, respectively.

According to sophomore Martinez Johnson, the annual Illinois Classic gives the Illini an opportunity to prepare for the season by facing teams composed of former college players and Paralympians.

“That’s why the level of competition is so good,” Johnson said.

Men’s head coach Matt Buchi said he isn’t concerned with Saturday’s results and that he looks at these games as a tune-up for the ones that truly matter.

“We’re kind of planning on using all of these games as warm-up games to get ready for Nationals,” he said. “We’re not really worried about the outcome, it’s just what we use them for.”

Despite the loss to the men’s team, women’s head coach Stephanie Wheeler was still pleased with the way her team played against its male counterparts.

“There were some places and moments where we played really well,” Wheeler said.

Game two was a different story for the women. The Illini lost to the Rehab Institute of Chicago with a final score of 53-34, and Wheeler was not as pleased with her team’s second showing as she was with the first.

“We let some things get to us and distract us from doing the things we know we can control,” Wheeler said.

The Illini kept it close at halftime, with a score of 28-17, but two games against male competition took its toll, and in the second half the team was outscored 34-19.

Christina Young led the Illini in scoring with 10, Freeman grabbed six rebounds, scored nine points and dished out an assist.

The Hornets played a tough, defensively sound game with five members on the team recording at least one steal. Offensive rebounding was also a key factor in their victory, with the Hornets having a 17-9 advantage on the offensive glass.

“In the first game we played much better. … We put ourselves in position to be successful,” Wheeler said when comparing the two games.

Both teams will start their regular seasons in a tournament from Nov. 21-23 in Whitewater, Wisconsin.

Drake and Eli can be reached at [email protected]